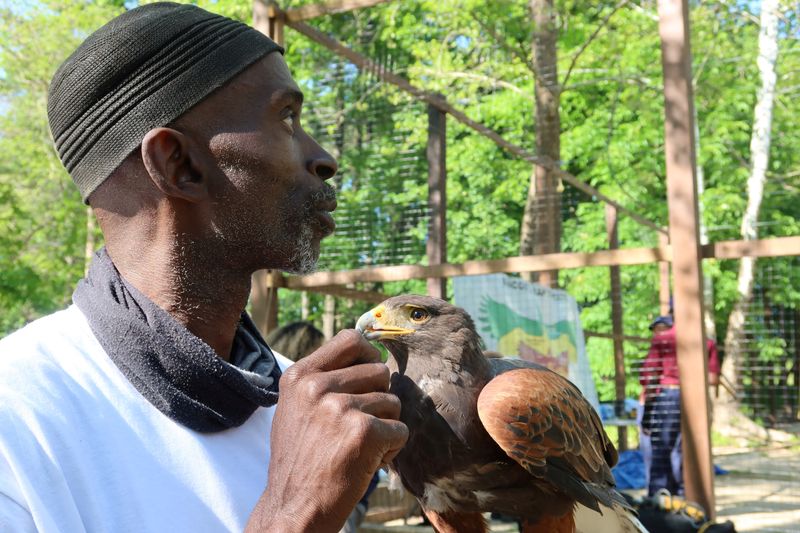 © Reuters. Rodney Stotts, a master falconer, holds a Harris Hawk in his hand as he oversees the construction of an aviary by members of the Capital Guardian Youth Challenge Academy in Laurel, Maryland, U.S., May 10, 2022. Picture taken May 10, 2022. REUTERS/Kevin Fo

WASHINGTON (Reuters) – Master falconer Rodney Stotts has written a book about his life path from drug dealer on the streets of Washington to wildlife expert, hoping to inspire others to take solace in nature.

“I went from ‘flipping birds’ – selling cocaine – to flying birds, and the destruction that I used to cause in that life,” Stotts said. “I’m just trying to make up for it.”

In his new memoir “Bird Brother,” the 51-year-old credits the “healing power of wildlife” for transforming his life.

As a young man in one of Washington’s roughest neighborhoods, Stotts had little to live for. His father had been murdered, his mother was addicted to crack, and many friends were dead from gun violence, Stotts wrote.

He expected to end up dead or in jail.

But a 1992 initiative to clean up the Anacostia River, led by Hollywood filmmaker and conservationist Bob Nixon, changed everything.

Nixon hired nine young helpers from a nearby public housing community, including Stotts. For the next several years, the drug hustler spent his days wading through dirty river water clearing out trash and learning about birds of prey.

The group helped bring bald eagles back to the city. Over time, Stotts found himself drawn more toward nurturing birds than dealing drugs.

“The more I moved away from it, the happier I seemed to get,” Stotts recalled.

Skeptics had scoffed at Nixon’s decision to hire inner city youths, but Nixon said Stotts’ story had proved him right.

“He’s exactly the same. I mean, full of personality, an amazing, brilliant human being, and I could see that right away,” Nixon said about first meeting Stotts in the 1990s.

Becoming a master falconer requires passing a state test and finding a sponsor to learn the ins-and-outs of falconry: the ethics of the sport; how to identify, trap and care for the birds; and how to release them back into the wild.

Many potential sponsors did not take Stotts seriously, he said.

Eventually he found a sponsor, and last June earned the designation of “master falconer.”

On a recent May evening, the Capital Guardian Youth Challenge Academy – a program for young school dropouts – worked to build an aviary for birds in rehabilitation in Laurel, Maryland.

Thirty years after their first meeting, Stotts and Nixon are passing their knowledge to the next generation.

“I tell people, ‘Go to a creek and just sit and listen to the water for 10 minutes. Turn your phone off, everything,” Stotts said.