Tottenham moved up to fourth in the Premier League table and piled the pressure on rivals Arsenal with a thumping 5-1 comeback win at home to Newcastle.

Goals from Ben Davies and Matt Doherty either side of half-time turned the game around after Fabian Schar’s free-kick flew past Hugo Lloris, and Spurs kept their foot on the pedal for a big win which boosts their belief for the run-in.

Heung-min Son finished a fine move started by the excellent Harry Kane to give Spurs the two-goal cushion they needed to move above their north London rivals.

It was a man of the match display from Kane, despite being a surprise absentee from the scoresheet. Instead Emerson Royal added a fourth with his first goal for the club, and sub Steven Bergwijn raced through the centre of a suddenly exposed Newcastle defence to complete the rout.

It’s the first time Spurs have been in the Champions League qualifying spots since September and – with three Premier League wins on the spin – Antonio Conte’s previously painfully inconsistent side look like they’re hitting form at just the right time.

Arsenal – who now have two games in hand – can reclaim their top-four spot if they pick up a point at Crystal Palace on Monday Night Football, but the yet-to-be-rearranged postponed derby between the two rivals is shaping up to be potentially decisive.

As for Newcastle, what appeared to be an ideal away day performance for 43 minutes fell away badly. They’ve now lost their last three but remain nine points clear of the relegation zone.

This game marked three years since the first Tottenham match at their new stadium and in that time only Manchester City and Liverpool have won more points on their own patch. That home advantage was clear early on, with Tottenham dominating possession and having as much as 83 per cent of the ball in the first 15 minutes.

But Newcastle boast a good away record at Spurs, having won four of their previous seven and gone unbeaten in their two trips to the new arena, and they did well to limit Spurs to a deflected shot from Rodrigo Bentancur, a Kane shot wide, and an off-target Eric Dier free-kick in the early stages.

Newcastle carried a threat when they did have the ball, too, with Cristian Romero excellent in halting Allan Saint-Maximin and then pulling off a crucial block to deny Joe Willock from seven yards out.

And it was Eddie Howe’s side who struck first on 39 minutes – thanks to a helping hand from Son, who crashed into Willock on the edge of the box, and goalkeeper Lloris who should have done better with Schar’s drive towards the bottom corner. 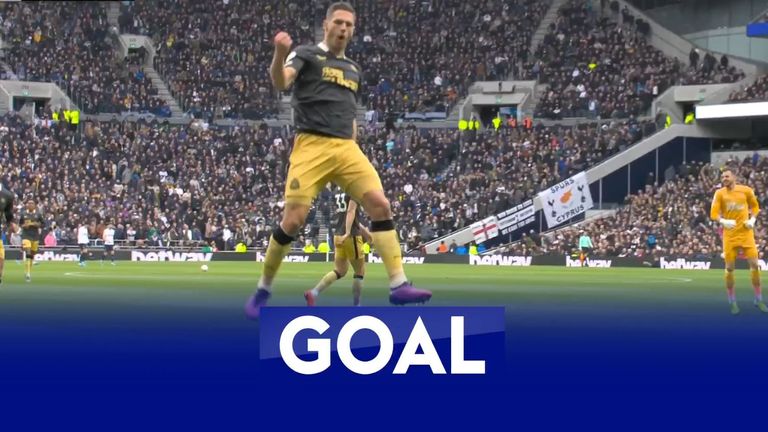 Fabian Schar blasts his free-kick past Hugo Lloris in the Tottenham goal to put Newcastle 1-0 up.

However, Son atoned for his error just three minutes later, bending in a beautiful cross for Davies to head in his first Premier League goal since 2017. 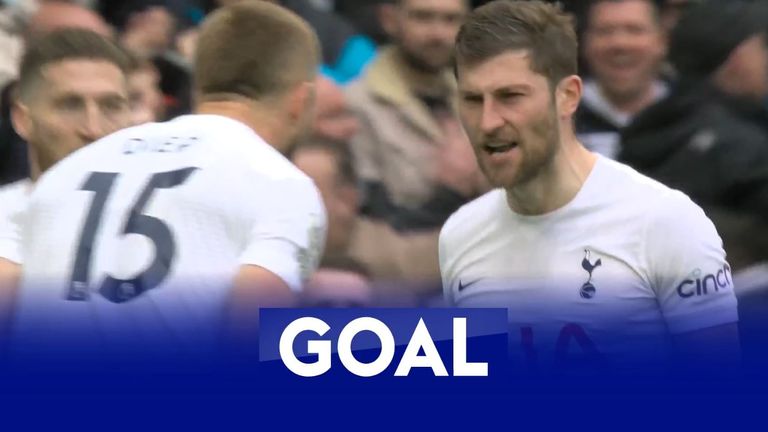 Ben Davies headed in Tottenham’s equaliser moments after Newcastle had taken the lead.

Tensions were running high moments before the half-time whistle sounded, with Joelinton, Bentancur and Saint-Maximin all booked after some pushing by the touchline, but Spurs applied their energy more positively three minutes after the restart, with Doherty – playing in an unfamiliar left wing-back role – darting in to head home at the back post from Kane’s excellent centre. 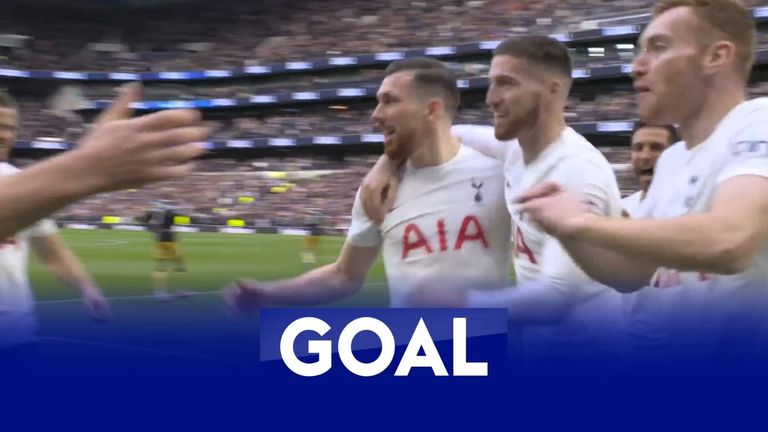 Matt Doherty stoops to head Tottenham in front against Newcastle.

Son fittingly got on the scoresheet on 54 minutes to pull his side out of sight – he now has 27 Premier League goals at this ground, more than any other player. The latest was wonderfully crafted, with Kane releasing Dejan Kulusevski to pick out the South Korean in the box. 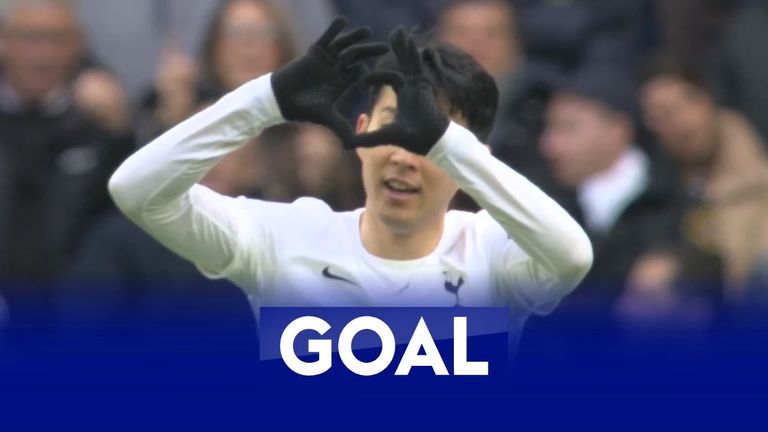 Heung Min Son adds a third goal for Tottenham as they extend their lead over Newcastle in the second half.

Schar desperately blocked to keep out Kane soon after but on an afternoon when Son was joined by some unexpected goalscorers, Emerson got himself into the six-yard box to add that fourth from Doherty’s cross with just 63 minutes on the clock. 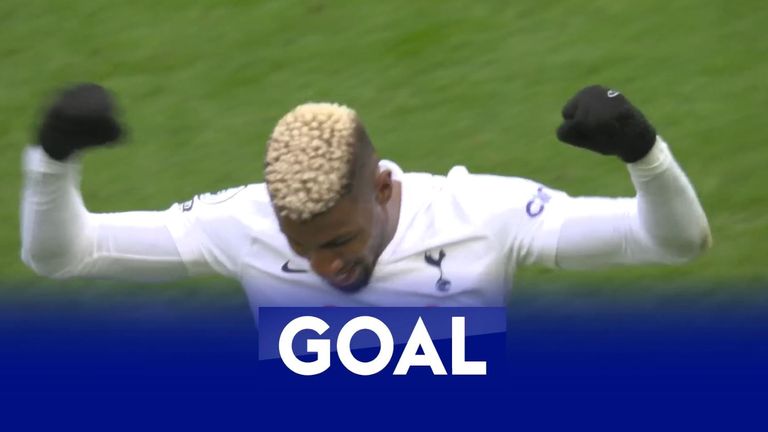 Emerson Royal gets his boot to the ball to score Tottenham’s fourth goal as they move even further clear of Newcastle. 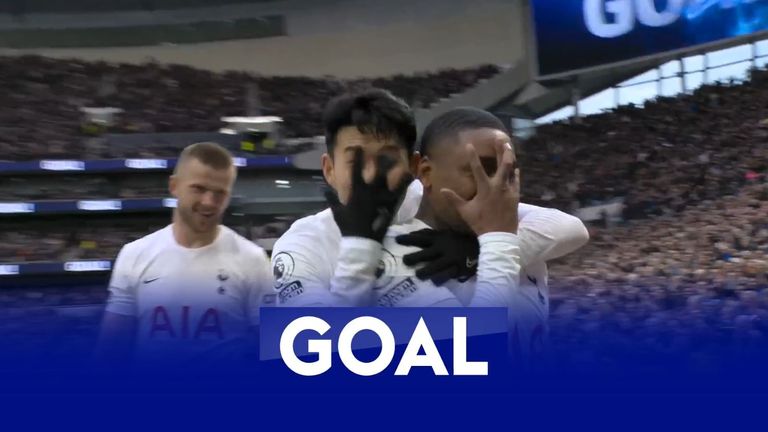 Steven Bergwijn gets Tottenham’s fifth goal as they take complete control against Newcastle.

Son was kicking himself for shooting wide from a good opening and sub Harry Winks bent an effort over the bar as Spurs continued to pile on the pressure against an increasingly ragged Newcastle, and it wasn’t a surprise to see a fifth go in, with Lucas Moura bundling through the middle of the park before playing in Bergwijn for a cool finish.

Up next for Newcastle is a home match against Wolves on Friday, April 8 also live on Sky Sports; kick-off 8pm.