The big names from Britain and Ireland head to Deauville on Sunday, live on Sky Sports Racing, in search of Group One glory.

This year’s Prix Jean Prat (2.50) looks a cracker with 11 going to post, including a host of raiders coming from across the channel.

Charlie Appleby’s Modern Games heads the field having started the campaign with Classic success in the French 2000 Guineas at ParisLongchamp in May.

A step up to a mile-and-a-quarter in the Prix du Jockey Club at Chantilly last month did not quite work out as hoped, but there was no disgrace in finishing third behind runaway winner Vadeni, who has since followed up in the Coral-Eclipse.

William Buick is again booked on board as the team drop back down to a more suitable seven furlongs.

The main challenge could well come from another British rival in Richard Hannon’s Lusail, who has put in three top performances without winning this season, including finishing as runner-up in the St James’s Palace Stakes at Royal Ascot last time.

Aidan O’Brien’s classy filly Tenebrism travels to France from Ireland to take on the boys. A winner in two starts last year, things have not quite worked out for her this season, finishing as a beaten favourite (eighth) in the 1000 Guineas, before an improved effort when fourth in the Coronation Stakes at Royal Ascot, proving no match for Inspiral.

3.25 Deauville – British hopes looking to bounce back from Ascot runs

There are three British hopes in the Group Three Prix de Ris-Orangis (3.25), each of whom were unable to make a mark at Royal Ascot but could find this a more favourable task.

Clive Cox’s Wings Of War ended his two-year-old campaign by picking up a Group Two prize in the Mill Reef Stakes at Newbury and put in a solid display when third in the Sandy Lane Stakes at Haydock in May.

The Group One Commonwealth Cup proved a step too far, finishing down in 12th, but a first trip to France and the first-time booking of jockey Kieran Shoemark could bring about a change of luck.

Ryan Moore and Charlie Hills team up again with experienced six-year-old Garrus, who returns to the scene of his last victory – the Group Three Prix de Meautry in August – having finished well down the field in 21st in the Platinum Jubilee Stakes when last seen.

One place behind Garrus at Royal Ascot and reopposing here is Charlie Fellowes’ Vadream, with David Egan back in the saddle having ridden the four-year-old filly to Group Three victory in October at Ascot and again when fifth in the Champions Sprint Stakes. A return to that level of form would put Vadream right in the mix.

Cox steps hat-trick-seeking Harry Three up to Listed level at Deauville in the Prix Kistena (4.00), with Ryan Moore retained after steering the sprint star to an impressive and valuable victory at York last month.

The pair are the only British representatives and face a number of talented home favourites, including Francis-Henri Graffard and the Aga Khan Stud’s Haziym, a close third at Group Three level on his last start. 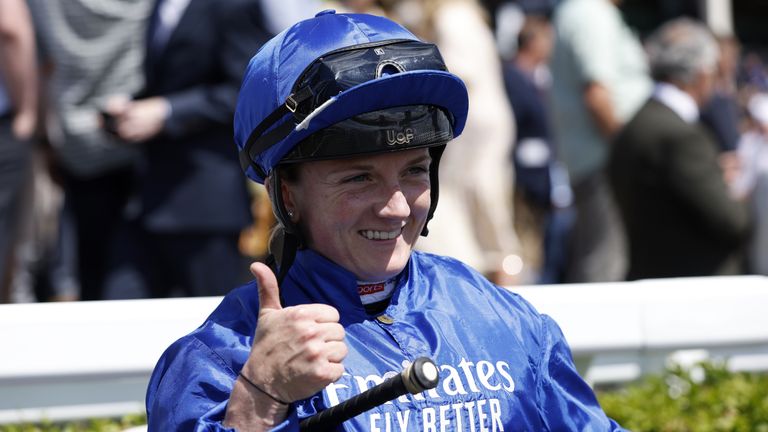 Watch every race from Deauville live on Sky Sports Racing on Sunday July 10.