Global stocks turned lower on Tuesday as a rally in the previous session, driven by China loosening some Covid-19 restrictions, was cut off by concerns about central banks raising interest rates.

Europe’s Stoxx 600 share index dipped 0.4 per cent in early dealings while London’s FTSE 100 was flat. Futures trading suggested Wall Street’s blue-chip S&P 500 index would fall 0.5 per cent on opening in New York after rising as much as 1.5 per cent on Monday.

Elsewhere, a broad FTSE index of Asia-Pacific shares lost 1.2 per cent and Australia’s S&P/ASX 200 dropped 1.5 per cent. This followed a decision by the Australian central bank to increase interest rates by half a percentage point, the largest amount in 22 years, sending the nation’s bond market into a tailspin.

The FTSE All-World index of global stocks has dropped almost 14 per cent this year as central banks worldwide have lifted borrowing costs to battle inflationary trends that began with coronavirus-related supply chain glitches and were exacerbated by commodity price rises caused by Russia’s invasion of Ukraine.

“We have priced what we know so far, and we need to be ready to price an improvement, or a lack of one,” said Marco Pirondini, head of US equities at Amundi. “By the end of the summer, if we are still in a regime of high inflation and [oil] sanctions against Russia, then the market has further to correct.”

The RBA made its move ahead of an interest rate decision expected from the European Central Bank on Thursday. US inflation data on Friday are expected to show consumer prices in the world’s largest economy rose at an annual rate of 8.3 per cent in May, the same as the previous month.

Germany’s 10-year Bund yield, a benchmark for borrowing costs in the eurozone, edged 0.01 percentage point lower to 1.32 per cent, remaining around its highest since 2011. After eurozone inflation hit another record high in May, ECB policymakers signalled the bank would raise its main deposit rate — currently at minus 0.5 per cent — by at least a quarter-point in July and further in September. 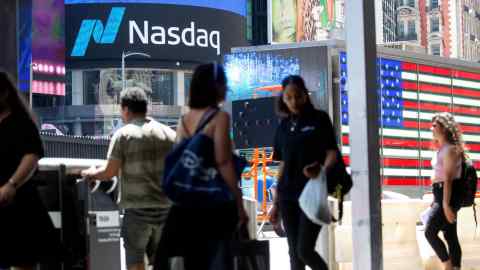 “We foresee significant volatility in bond markets around the ECB meeting this week as the communication challenge of the policy strategy is formidable,” said Andreas Billmeier, European economist at Western Asset.

As well as preparing markets for rate rises, the ECB is also likely to “stress downside risks to the economy”, Billmeier said.

The 10-year US Treasury yield, which underpins loan pricing and equity valuations worldwide, was steady at 3.03 per cent after climbing in the previous session as traders dialled up their bets of rate rises by the Federal Reserve.