What a season it’s been for Stephen Curry! Champion for a fourth time, officially crowned the all-time 3-point king of the NBA, and the long-coveted Finals MVP award.

Curry officially became the best shooter in league history back in December at Madison Square Garden after passing Ray Allen’s record for the most NBA 3-point shots ever made.

Then, on Thursday night, he added the one thing he didn’t have in his trophy cabinet: an NBA Finals MVP award after he completed his finals series masterpiece against the Boston Celtics with 34 points, leading the Golden State Warriors to their fourth title in eight years.

His CV is up there with the absolute greatest to have played the game. Here are some of the key milestones from a storied career… 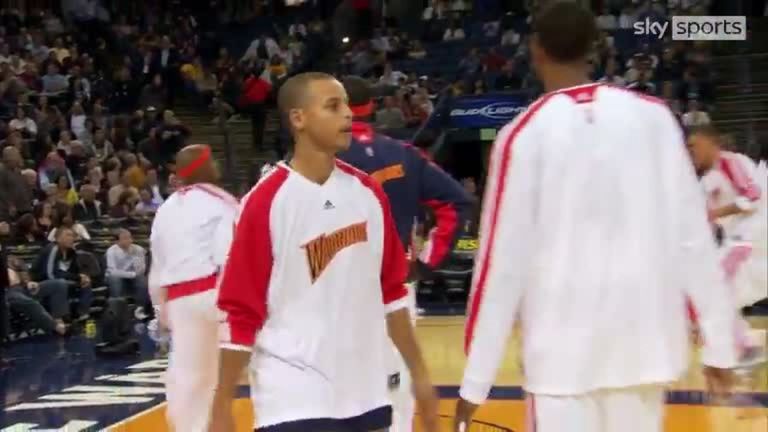 Check out this behind-the-scenes look at Curry’s regular season NBA debut on October 28, 2009

Start at the beginning, after all, it’s the best place to start. Following, a standout collegiate career at Davidson, the Golden State Warriors chose Curry with the No 7 pick in the 2009 draft as they were in the midst of a franchise rebuild. Curry showed some flashes of the play that has marked his Warriors career, finishing with 14 points on 7-for-12 shooting along with seven assists, four steals and two rebounds in a 108-107 loss to the Houston Rockets.

Overall as a rookie, Curry would average 17.5 points, 4.5 rebounds, 5.9 assists and 1.9 steals while leading Golden State with 166 made 3-pointers (a total that ranked sixth in the NBA as well). Curry played alongside veteran Monta Ellis and the two combined to average the most points, rebounds, assists and steals out of any guard duo in the NBA (66.8 ppg combined). Additionally, Curry’s five 30-10 games that season were the most by a rookie since Michael Jordan (1984-85) and tied for the second most all-time (Oscar Robertson 25, 1960-61). 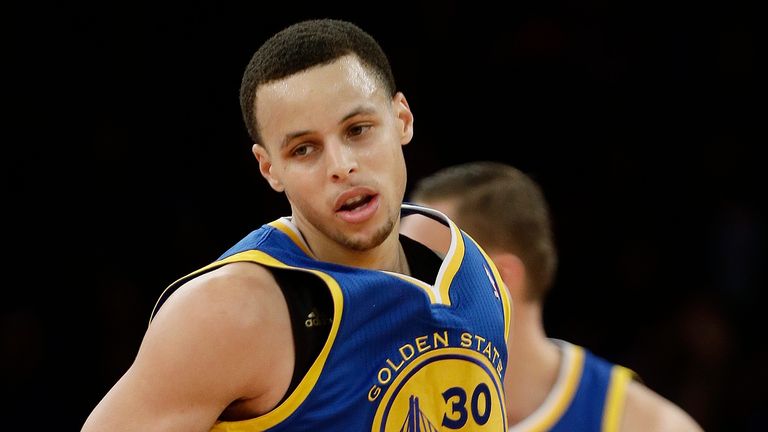 Curry dropped 54 points against the Knicks in 2013

A 42-point game as a rookie was Curry’s previous career high until February 27, 2013 against the New York Knicks at Madison Square Garden. He then lit up New York for 54 points, which was the highest-scoring performance by anyone in the league that season as he sank a then franchise-record 11 3-pointers (one shy of the NBA record at the time). Additionally, Curry’s total was the most by a Warrior since Purvis Short tallied 59 points on November 17, 1984, and only Short, Wilt Chamberlain, Rick Barry and Joe Fulks had recorded higher scoring games with the Warriors.

In the 2012-13 season, Curry was finally healthy again after injuries spoiled his 2011-12 season. His banner moment that season came on the last night of the regular season as he sank a 3-pointer with 6:49 left in the second quarter in Portland to give him 270 that season. In doing so, he passed the 269 Allen made with Seattle in 2005-06. Overall, Curry had 272 made 3-pointers that season, accomplishing that total in 53 fewer attempts than Allen did. He also claimed the Warriors’ single-season record for 3-pointers, besting Dorell Wright’s mark of 194 (set in 2010-11) by a whopping 78 long-range shots.

He became the first player in NBA history with at least 250 threes and 500 assists in a single season and the second-ever to hit at least 200 threes on 45 per cent-or-better from long range, joining Glen Rice in 1995-96.

Why own one single-season 3-point shooting record when you can own two of them? That seemed to be the approach Curry took in 2014-15 as he smashed his mark for 3-pointers made. On April 9, 2015, Curry pushed past his single-season mark of 272 made 3-pointers with a shot from the top of the arc (ironically enough, against the team he set the old mark against – the Trail Blazers). 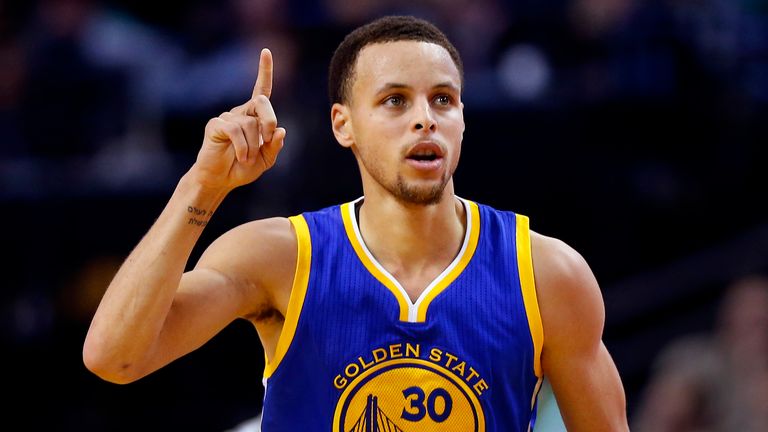 The Warriors were on the rise in the Western Conference by the time the 2014-15 season began, with Curry leading the charge for Golden State. Any doubters of Curry’s ability were silenced in 2014-15 after his banner season led to league MVP honours, besting Houston’s James Harden for the award.

Curry was a unanimous All-NBA First Team selection, led the league in 3-point field goals for a third consecutive season and ranked third in 3-point percentage. He hit a 3-pointer in all but one of his 80 games in 2014-15, including each of his last 73 contests, giving him at least one three in 148 of his last 149 regular-season games. With season highs of 51 points and 10 3-pointers on February 4 vs Dallas, Curry became the only player in league history to register multiple games with at least 50 points and 10 3-pointers. 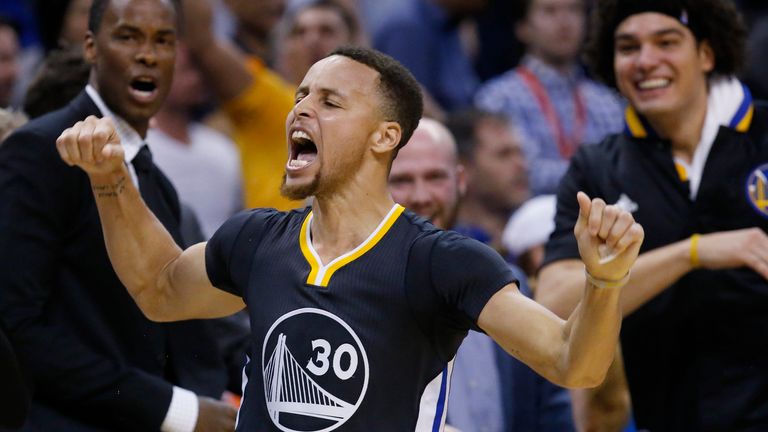 As the old saying goes: third time is a charm. For Curry and the Warriors, his breaking of his single-season 3-pointers-made mark came in a classic overtime showdown against the rival Oklahoma City Thunder. Curry finished with 12 3-pointers in the game, including the game-winner with 0.6 seconds left to seal the win for Golden State.

Curry tied the game up again with 2:29 remaining with his 11th 3-pointer on the night, which was the one that pushed him to 288 on the season. He then finished things off with his thrilling shot with less than a second remaining that further moved the record forward. Overall, Curry finished with an astounding and record-setting 402 3-pointers made. In that 2015-16 season, Curry became the first player in NBA history to sink 300 3-pointers and 400 3-pointers in a single campaign. To date, he is the only player ever with 400 or more 3-pointers in a season. One season after collecting his first MVP award, Curry did even more to wow the voters in 2015-16. He became the first unanimous MVP winner in league history after Golden State rolled to an NBA-record 73-9 season spearheaded by the high-scoring guard. 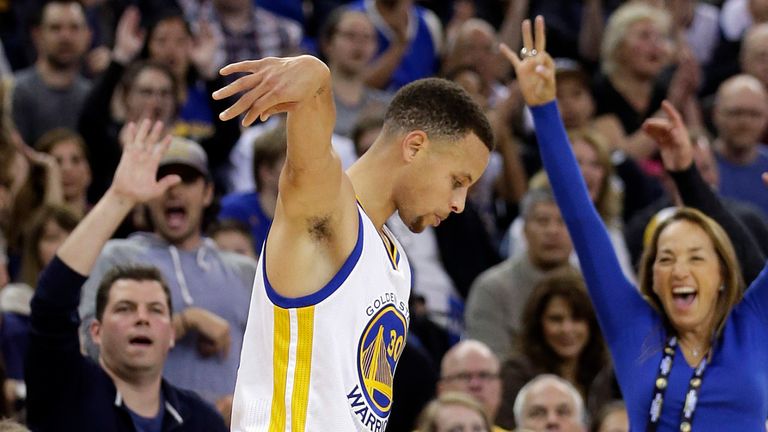 Curry hit a 3-pointer in each of the 79 games he played in 2015-16, setting an NBA record by hitting at least one three-pointer in 152-straight regular-season games. He hit at least 10 3-pointers four times during that season, a feat no other player had accomplished more than three times in their careers up to that point.

Overall, he averaged 30.1 ppg and became the first guard to average at least 30 ppg while shooting 50 per cent or better from the floor since Michael Jordan in 1991-92. Curry also led the league in steals (2.1), becoming the first player to lead the league in both scoring and steals since Allen Iverson in 2001-02. He shot 50.4 per cent overall, 45.4 per cent on 3-pointers and led the NBA in free throw percentage (90.8 per cent), joining Steve Nash as the only players to hit 50/45/90 over the course of an entire campaign. 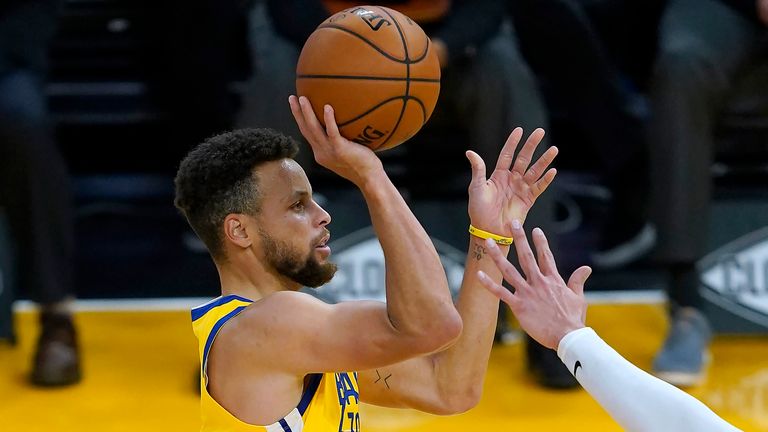 Curry erupted for a career high 62 points against the Trail Blazers, earlier in 2021

Injuries limited Stephen Curry to just five games in the pandemic-stricken 2019-20 season, but he was back with a vengeance in 2020-21. Through his first five games that season, Curry was averaging 26.4 points, 4.6 rebounds, 6.6 assists and 1.4 steals while shooting 42 per cent overall (and 32.1 per cent on 3-pointers).

Curry became the NBA’s all-time leader in career 3-pointers during the Golden State Warriors’ 105-96 victory over the New York Knicks at Madison Square Garden on December 14, by hitting a pair of first-quarter triples to move past Ray Allen and seize the top spot.

As soon as the 2,974th 3-pointer of his career dropped, the Arena went absolutely wild and the story of the night is recorded in this thread put together by the Sky Sports NBA Twitter admin – definitely worth checking out if you are a fan of the Warriors’ number 30.

Curry broke the 3-point record over the course of 789 games, which is 511 fewer games than it took Allen (1,300) to reach the milestone. The fact it took over 500 fewer games is just further evidence that Curry is undoubtedly the best shooter the game has ever seen.

Before you can be No 1, you have to get to second on the list and Curry also remembers that fondly. As his career rolled into season 12 in 2020-21, his 3-point proficiency did not stop. By the third game of that season, he reached 2,500 career 3-pointers faster than anyone in NBA history, joining Allen and Reggie Miller in that club. Thirteen games later, Curry passed Miller to snag the No 2 spot on the all-time 3-pointers-made list. An interview and highlights of Curry and Reggie Miller, as Steph passed his childhood hero to the number two spot of most ever three-pointers made in the NBA

Curry nailed a catch-and-shoot corner three in the third quarter against the Utah Jazz to pass Miller, who made 2,560 3-pointers over 1,389 regular season games during his 18-year NBA career. Curry passed him in his 715th career game, coming early in his 12th NBA season. 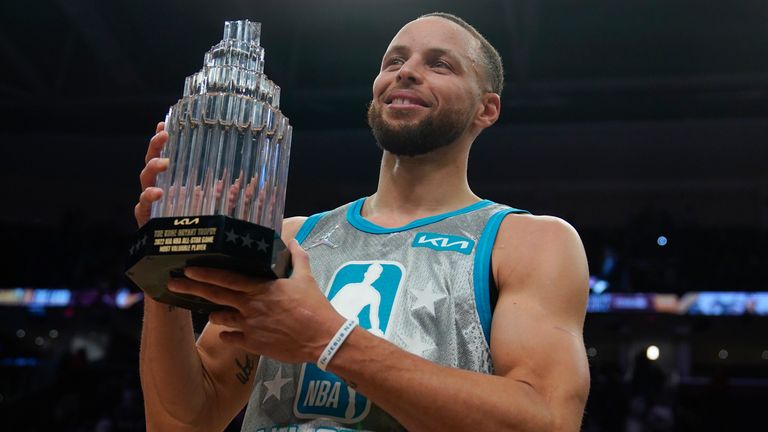 Stephen Curry demolished the record for the most 3-pointers in the NBA All-Star game with 16 makes from beyond the arc as he took over the game, dropping 50 points

Steph went absolutely wild in this year’s NBA All-Star game back in his home state of Ohio, scoring 50 points and notching 16 threes as he broke a host of records.

The only record he did not break was Anthony Davis’ 2017 mark of 52 points scored in an All-Star Game. It was there for the taking, but Curry missed his last six shots from the floor after red-hot flurries saw him set new marks for the most three-pointers in an All-Star quarter (6), half (8) and game (16) while also passing James Harden on the midseason classic’s total made threes list (39) to move to the top.

Most consecutive games with a 3-pointer

One of the few disappointments of this year’s NBA Finals series for Curry came when his record run of games with a made 3-pointer came to an end in Game 5. He had gone 233 consecutive games with at least one made 3-pointer, stretching back to November 8, 2018 and a game against the Milwaukee Bucks. In that game, Curry went 0-for-4 from three in the game and had just 10 points, but there were mitigating circumstances as he departed midway through the third quarter with an injury and did not return. He had also scored one in every playoff game of his career prior to Monday night’s shutout, 132 games stretching back all the way to his debut in 2013.

Dependability from the 3-point line has, of course, been a hallmark of Curry’s career and – prior to the current record being set – he had already done so once before. The previous mark was 157 consecutive games with at least one 3-pointer made, a streak that spanned three seasons from November 13, 2014 to November 3, 2016. Kyle Korver is the only other player to reach 100 straight games with a 3-pointer at 127 games. That brings us right up to now – and Curry was absolutely deserving of his first NBA Finals MVP award! He finished with per-game averages of 31.2 points, 6.0 rebounds, 5.0 assists and 2.0 steals (this really indicates his defensive leap) on 48.2 per cent from the field and 43.7 from 3-point range.

Even if the Celtics had won the series, the Warriors superstar was the best player by a comfortable margin and his dazzling 43-point display in Game 4 was a work of art. Now, with the Bill Russell MVP Award – won in the TD Garden no less – the Curry trophy cabinet is complete. 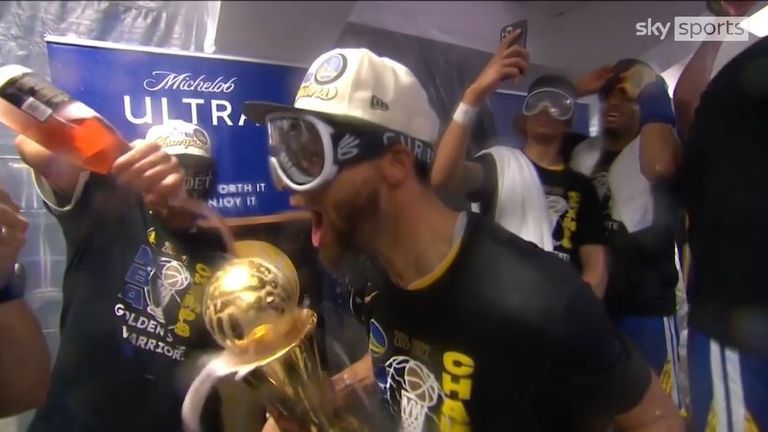 As he said after breaking the NBA 3-pointers record, everything else will now “just be about how far can you push it.”

It’s going to be brilliant to see how far he can go. As one of the greatest sportsmen on the planet, he’s just there to be enjoyed.

The live basketball continues on Sky Sports with the WNBA, subscribe to watch the live action.