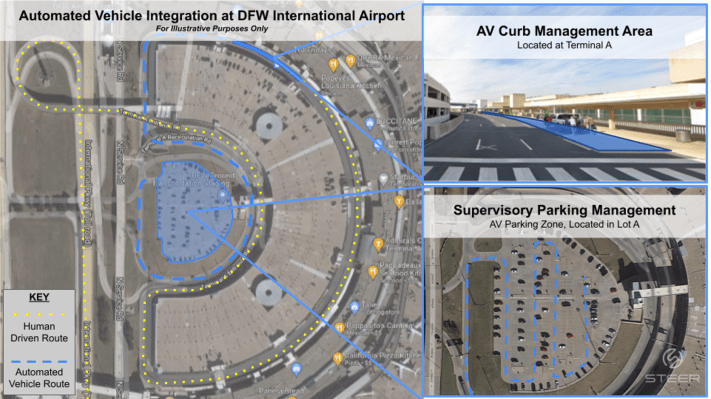 While most of the autonomous vehicle companies we hear about are working toward the commercialization of robotaxis and self-driving trucks, Steer Tech, a Maryland-based AV technology company, has been hyperfocused on providing high-level autonomy for one specific use case: automated parking. The startup has secured at least two OEM partnerships to embed its parking tech as a feature for passenger vehicles, but now it’s expanding on that original thesis and moving into the commercial sector.

On Thursday, Steer said it was awarded $1.5 million in funding from the North Central Texas Council of Governments to develop a test bed at the Dallas Fort Worth (DFW) International Airport that will demonstrate how an automated parking ecosystem might alleviate the high traffic and heavily congested curbside drop-off and pick-up areas at the airport, particularly as air travel and, consequently, the use of ride-hailing services, picks up.

The pilot, which Sonalker says will go on for over a year, will combine three subsystems: low-speed vehicle automation for valet parking, supervisory parking management so the DFW system can watch over and control all the vehicles in AV mode and active digital curb management. The pilot will initially use 10 test vehicles — a combination of sedans, SUVs and potentially some vans — that have been outfitted with Steer’s AV software and sensor suite, which consists of radar, camera, ultrasonics and precision GPS.

“It’s a complete experiential system that keeps airport stakeholders and airport patrons in mind — how would the experience be, and how can you maximize it for them?” Sonalker told TechCrunch. “Usually in the AV space and in most innovation spaces, the design is built for what the technology can do and everybody has to work around that. What we’re trying to do here is create an experience where the patron of the airport is the center of the experience.”

“The win here for all of us is that valet parking itself will move into the next chapter of deployment, because now there’s an airport here, an actual stakeholder, that’s putting it into their system, and DFW wants interoperability because, who wants to be locked into one type of system?” said Sonalker. “In order for this system to get adopted, everybody needs to come together and agree on certain common interoperability standards so that we can build out an ecosystem. It’s gonna bring us to the next league on the adoption curve, and we want to precipitate that.”