Four decades ago, I discovered just how treacherous Moscow’s propaganda can be. It was 1989, and I was enrolled in a PhD programme at the Soviet Academy of Sciences via a British-Soviet university exchange that flourished briefly during perestroika.

To prepare, I had to read endless Soviet anthropology (etnografiya) books. This was challenging given my nascent Russian-language skills, so I initially tried to cope by doing what any harried student might do — skim-read the first and last chapters to grasp enough to do my homework.

Big mistake. The first and last chapters contained formulaic letters of praise to communism, intermixed with Russian imperialism and a sense of profound cultural superiority of the kind that is tragically intertwined with current events in Ukraine. “Do the professors really believe this stuff?” I wondered, as I read the opening chapters. It was hard to tell, since open dissent was rare.

“Try the middle,” one Russian supervisor whispered to me, when I bemoaned this state of affairs. So I did and quickly realised that chapter three was typically where the proper academic material was located, presumably because the Soviet censors couldn’t be bothered to read that far.

If nothing else, the experience taught me a lesson about the dangers of imposing your own assumptions on others. Westerners like me may have been trained to process information via headlines (or today’s snappy social media posts), but in the Soviet Union (like many authoritarian regimes) it paid to read between the lines and/or to start in the middle. 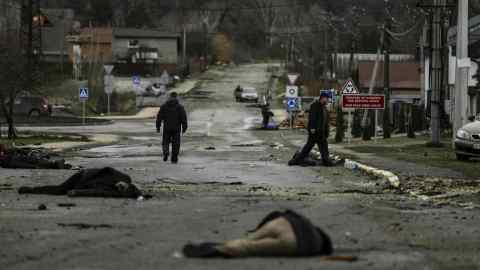 I keep thinking about this experience as the bad news tumbles out of Ukraine, and it becomes clear that Russian political discourse is being shaped by an intellectual framework that seems just as foreign as the one that I witnessed. More than a month into the invasion, Russian media and political elites are no longer bothering to justify the war simply by referring to the supposed links between Russia and Ukraine, or perceived western threats. Instead, the mantra is that Ukraine is ­overrun by Nazis who must be got rid of to “purify” the region.

“I am shocked by how deeply people have become infected by Nazism,” declared the influential head of RT television Margarita Simonyan last week, ignoring again the fact that President Volodymyr Zelensky is Jewish. Or, as the state-owned RIA Novosti website echoed: “Ukrainism is an artificial anti-Russian construction that does not have its own civilisational content, a subordinate element of an . . . alien civilisation.” The same article calls for the “liquidation” of Ukrainians.

This is fascism. As Greg Yudin, a political scientist at Moscow’s School of Social and Economic Sciences, wrote on Twitter: “It sounds so outlandish to most observers that it is too easily written off. [But] if you feel like this logic of purification reminds [us] of Nazi thinking, I think there’s a lot of truth to that.” Which then raises another question: do ordinary Russians actually believe it? 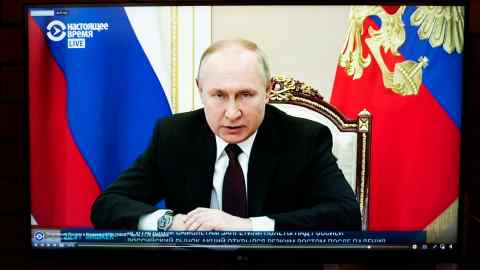 And while it’s tempting to assume that current polls are distorted by repression, they are not outliers. In a blog post last month, Kseniya Kizlova and Pippa Norris, two researchers at the London School of Economics, pointed out that, “Even if many ordinary Russians are badly misinformed . . . early polls may still capture authentic attitudes reflecting a silent majority at home supporting Putin’s actions.”

Yet as I learnt, the reality of how people process information is not always apparent. Maybe some Russians do believe the liquidation lie. Many probably agree with Putin’s argument that Russia faces an existential threat and needs to fight back, particularly if they only watch Russian TV. “The monstrosity of lies on federal channels is unimaginable… And, unfortunately, so is its persuasiveness for those who have no access to alternative information,” tweeted Alexei Navalny, the Russian opposition leader, this week.

But I wonder if others are engaging in the kind of doublethink employed by my former professors when they taught the opening chapters of etnografiya books? Or perhaps they are like my fellow Soviet students who just skipped the first chapters of books to screen out the rhetoric? In short, there might be far more cynicism in Russia about the government than those polls show.

Maybe that is wishful thinking. I am writing this in New York, half a world away from Moscow. But I take a crumb of comfort in another memory from that time. After the collapse of the USSR in 1991, I asked many Soviet ethnographers if they had really believed in the ridiculous rhetoric they inserted at the start of their books. The answer I often got: “We believed and disbelieved at the same time.”