Sir Alex Ferguson is back on board at Manchester United after the club’s chief executive Richard Arnold turned to the legendary Old Trafford boss for advice.

Manchester United met Benjamin Sesko’s agent last Wednesday but Red Bull Salzburg don’t want to sell this window unless they get an offer over £55m.

Antonio Conte has looked to play down his personal feud with Jose Mourinho by insisting their previous clashes are now in the past and that they have a mutual goal.

Memphis Depay has ruled out an exit from Barcelona this summer, despite the arrivals of Robert Lewandowski and Raphinha.

Paul Gascoigne revealed that Sir Alex Ferguson still harbours a grudge against him because he signed for Tottenham instead of Manchester United in 1988.

Bayern Munich manager Julian Nagelsmann has admitted his side may still sign a striker to replace Robert Lewandowski ahead of the new season.

Cristiano Ronaldo is ready to pull on a Manchester United shirt for the first time in two-and-a-half months as the club host Spanish side Rayo Vallecano in a friendly on Sunday. 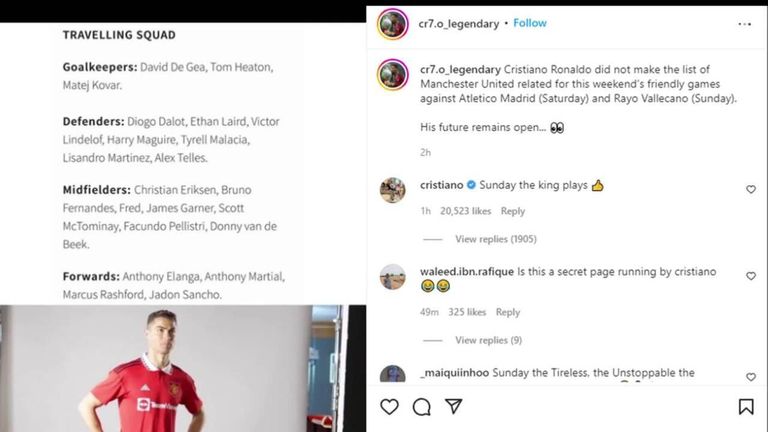 Following continuous speculation about his future, Manchester United forward Cristiano Ronaldo says he will be available against Rayo Vallecano this Sunday

Arsenal have an agreement in place to sign Youri Tielemans which would take their summer spending close to £150m, according to reports.

Manchester United will pay Ajax a staggering £56,000 bonus every time Lisandro Martinez plays for the club.

Manchester United are thought to have turned their attentions to Lazio midfielder Sergej Milinkovic-Savic as an alternative to Frenkie de Jong as the Dutchman looks set to stay at Barcelona.

Hugo Ekitike has said he was keen on joining Newcastle United but the opportunity of signing for Paris Saint-Germain was too good to turn down.

Barcelona’s treatment of the Holland international Frenkie de Jong is being closely monitored by the global players’ union Fifpro – the Catalan club owe him €17m (about £14m) in wages he agreed to defer during the pandemic and are trying to make him accept only €7m.

Norway has pulled out of hosting the International Gymnastics Federation’s annual congress in October as it is not willing to allow delegates from Russia and Belarus to attend.

Chelsea have received the green light from Benjamin Pavard that he would be willing to join the club providing an agreement is struck with Bayern Munich.

Leeds United manager Jesse Marsch is a huge admirer of Atlas forward Julian Quinones as he continues his search for a striker this summer.

Manchester United have ‘made an attempt’ to reach out to Napoli midfielder Fabian Ruiz’s representatives over a potential transfer, according to reports in Italy.

Sergino Dest has reportedly confirmed his desire to stay at Barcelona this summer amid interest from Manchester United and Chelsea.

Leeds have completed the signing of 18-year-old wonderkid Sonny Perkins.

Newcastle are set to beat Chelsea and Everton to the signing of Maxwel Cornet by triggering his release clause, reports suggest. Billy Gilmour, Ethan Ampadu and Kenedy have not been given shirt numbers for the upcoming season, reports suggest.

The PGA Tour is bracing itself for an imminent legal challenge from LIV rebels trying to overturn injunctions so they can appear in next month’s FedEx Cup play-offs.

Timo Werner continues to be linked with a move away from Chelsea, and Real Madrid and Juventus are reportedly amidst a ‘tug-of-war’ for the German.

Former Manchester United midfielder Paul Pogba is set to visit the doctor of ex-team-mate Zlatan Ibrahimovic in an attempt to keep his World Cup dream alive.

Celtic midfielder Matt O’Riley is “aware” of interest from Leicester City but insists he is fully focussed on life at Parkhead.