Led by captain Jamie Spencer, Great Britain and Ireland won five contests on the expanded eight-race card to leave defending champions the Ladies, Europe and the Rest of the World well behind.

Both Spencer and Callan enjoyed doubles on the day, with team-mate Kieran Shoemark adding another.

Joanna Mason had got Hayley Turner’s Ladies team off to a flying start on her first-ever ride in the team competition, before Turner enjoyed her customary Shergar Cup victory and legendary Canadian rider Emma-Jayne Wilson added a third.

There was no luck for Frankie Dettori’s Europe team as they and the Rest of the World ended the day winless.

How the Shergar Cup unfolded…

Mason got the Ladies team off to the perfect start when steering William Haggas’ Amanzoe to victory in the Dubai Duty Free Shergar Cup Curtain Raiser Classified Stakes.

Victory for Mason, a late replacement for Hollie Doyle, was never in doubt once the 5/2 joint-favourite hit the front in the home straight, sending both rider and the defending champions to the top of the leaderboard with 15 points.

“It’s a long old straight here, isn’t it?! I hoped I could do the girls proud,” Mason told Sky Sports Racing, having started the day as favourite to take the Silver Saddle title awarded to the top rider. 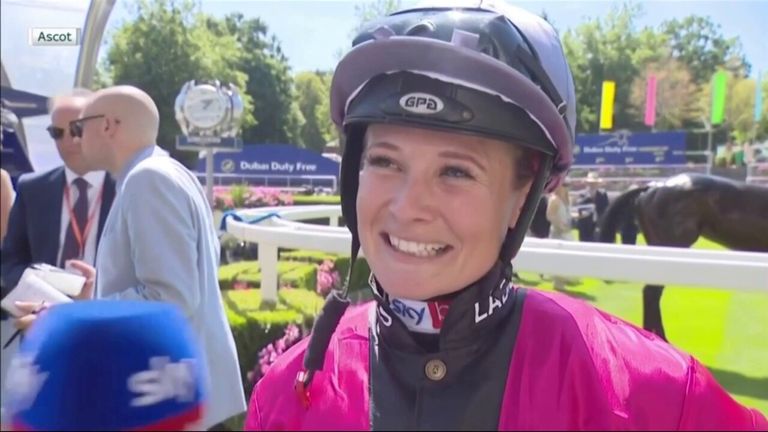 Joanna Mason got the Ladies team off to a winning start in defence of their Shergar Cup title with Amanzoe, her first ever ride in the competition

A delighted Haggas said: “She is improving. She won very nicely and has been given a perfect ride.

“One of the reasons the Shergar Cup is so successful is that it gives everyone a chance to meet a few foreign jockeys.

“It is a real global event and it is terrific that the girls have got a good start. Jo has proven that, given the right ammunition, she is just as good as anyone.”

Glorious Goodwood winner Orbaan was given a canny steer by Callan to double up in the Dubai Duty Free Full Of Surprises Classified Stakes.

The 10/3 joint-favourite picked up maximum points, with Divine Magic claiming the silver medal for the Rest of the World as Takeshi Yokoyama enjoyed a fine first ride at Ascot.

Callan said: “It was easy. It is a pleasure when you ride horses like that. It was a copy of Goodwood – he relaxes and travels. You can feel he is wanting to go and when we got to the two [furlong] pole, I was like, ‘wait a little bit longer’, and that fills him with confidence. When you pull him out, he accelerates really quickly.”

The Shergar Cup’s two most experienced jockeys fought out the finish of the Dubai Duty Free Shergar Cup Dash as Turner aboard the 7/2 favourite Manaccan just held on from the Dettori-ridden Judicial.

The two-time Alistair Haggis Silver Saddle winner was riding her ninth winner in the event and gave the Ladies team their second success of the afternoon.

“It’s so good [to have another winner] – I thought he was my best ride,” smiled Turner, whose team were on 39 points after the win – just two behind Great Britain and Ireland.

Themaxwecan (9/1) ended a long losing run in a thrilling finish to the longest race of the day, the two-mile Dubai Duty Free Shergar Cup Stayers.

Spencer partnered the six-year-old for Mark and Charlie Johnston, with the victory extending the lead of Great Britain and Ireland at the top of the standings.

It did not take long for Great Britain and Ireland to add their third victory of the afternoon when Shoemark guided Pride Of Priory to score in the Dubai Duty Free Shergar Cup Challenge.

The 3/1 winner was also a second triumph on the card for Somerville Lodge handler Haggas, and saw the GB and Ireland team strengthen their position at the top.

Haggas said: “He has won really nicely. I don’t know what we will go for. We will try to go for a nicer race now. He’s won on fast ground, which is good. I always thought he wanted a bit of dig.

“It is the little victories in life – and that is a big one for her!” 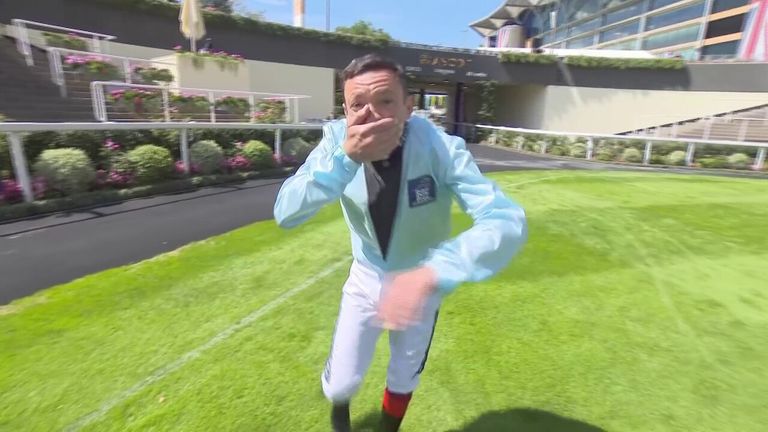 There was a fourth Shergar Cup winner for Wilson who guided Jungle Cove (14/1) to victory in the Dubai Duty Free Shergar Cup Mile.

Given a patient ride from the Canadian, the Jessica Harrington-trained five-year-old was pushed out for an easy success. Callan rode runner-up Redarna to top the jockey standings with two races left.

Harrington said: “It was the first time I have had a runner in the Shergar Cup and it was a fairytale ending.

“I’m thrilled with him. I was delighted when he got in, because he needed four or five to come out. He will go on any ground – he is just one of those horses.

“I’m all for the team concept. I am delighted we got a win for the girls. It was very well planned.”

There was not only a double for Spencer, but a treble for Haggas as 3/1 joint-favourite Hamaki held on bravely in the Dubai Duty Free Shergar Cup Classic.

The victory gave Great Britain and Ireland an unassailable lead in the standings, while Spencer headed the race for the Silver Saddle by two from Callan with only one race to go.

It was Callan who sealed the deal in the last, taking the Dubai Duty Free Shergar Cup Sprint with 4/1 co-favourite Adaay In Asia, trained by Harry Dunlop.