Russian firefighters were battling a huge blaze at a fuel depot near the border with Ukraine on Friday after an explosion at the facility that the local governor blamed on the Ukrainian military.

Videos on social media showed two helicopters flying at low altitude before firing missiles at the depot in the city of Belgorod, causing a fire that sent clouds of smoke billowing into the sky.

The incident in Belgorod, which is 40km from the Ukrainian border, would be the first Ukrainian strike on Russian soil since Vladimir Putin invaded the country in February.

Responding to the accusations, a Ukrainian defence ministry spokesperson said: “I will neither confirm this information or deny it”. He said Ukraine was “conducting defensive operations” to repel Russia’s invasion, adding that did not mean it had to take responsibility for “calculations, catastrophes and all developments” taking place in Russia.

Earlier in the day Ukraine’s armed forces tweeted a video of the fuel depot exploding with two helicopters flying by. “Russian Belgorod . . . Ukrainian aviation works! Glory to Ukraine!” read the tweet. It was later removed.

Kremlin press secretary Dmitry Peskov said that Putin had been informed of the attack.

“Obviously this is not something you can say creates friendly conditions for holding negotiations,” Peskov told reporters, according to Russian news agency Interfax. He said Russia had “air dominance, that’s an absolute fact” and denied to comment further on the strike.

Russia’s emergencies ministry released footage showing firefighters working to extinguish the blaze at the depot, which is owned by Rosneft. The state-run oil company said it had evacuated its staff.

The incident came two days after an explosion at an ammunition depot in Belgorod, which is just over the border from Kharkiv, Ukraine’s second-largest city. No cause has been given for the explosion.

Russia has carried out several air strikes on fuel and food depots across Ukraine with cruise missiles, a tactic Kyiv said was aimed at forcing it to distribute its stock and ruin the planting season.

Separately, Ukraine said Russian forces were seeking to form “occupation administrations” in Moscow-controlled parts of the country as president Volodymyr Zelensky warned of “powerful strikes” on the region.

The Ukrainian military said on Friday that Russia was trying to set up governance structures in the “temporarily occupied” districts of Donetsk, Luhansk, Kherson and parts of Zaporizhzhia.

The statement followed days of warnings that Moscow was preparing to intensify its attacks. Russia has increased the number of troops in the Donbas region while continuing its military assault in the south of the country. UK intelligence services said Russia was redeploying forces from Georgia to fight in Ukraine.

Ukraine’s military said: “In the temporarily occupied territories, the Russian enemy continues its illegal actions, restricting the movement of civilians, using the houses and apartments of local residents to accommodate personnel, and holding local residents and activists hostage. Marauding and violence against Ukrainian citizens continues.” 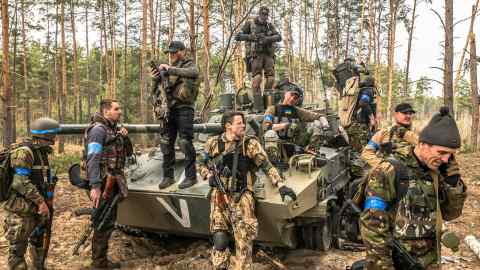 Zelensky also said he had stripped two generals of their military ranks. The Ukrainian president called the former internal security chief at the SBU, Ukraine’s intelligence service, and a general previously in charge of security for the SBU in the Kherson region, “traitors” and “anti-heroes”.

Ukrainian forces have prevented Russia from capturing any big cities, including Kyiv, where Moscow has pulled out some troops that were fighting near the capital. But the war is raging in the east and the south, where Russian forces are pounding the besieged port of Mariupol despite pledges that it would implement a ceasefire.

Moscow has said it was moving into the “final phase” of operations after “achieving all the main tasks” in northern Ukraine and would focus on the Donbas region in the east, where it has already taken over territory.

On Thursday, a US official said Russia had stepped up its air strikes, casting further doubt on Moscow’s claims that it was de-escalating and relocating forces in Ukraine. The strikes were concentrated around Kyiv, Chernihiv, Izyum, Mariupol and the Donbas. “For all this talk of de-escalation and moving away, Kyiv is very much under threat from air strikes,” the official said.