Wolves are confident that Ruben Neves will stay this summer and the club would like to talk to him about a new contract.

Neves is among the potential options at Manchester United if they are unsuccessful with their pursuit of Barcelona’s Frenkie de Jong, who is also a target for Chelsea.

Neves shares the same agent as Cristiano Ronaldo – Jorge Mendes, who is continuing to seek a solution for the Portugal star, who wants out of Old Trafford.

Wolves manager Bruno Lage says ‘big teams’ will pay up to £100 million for a player like Ruben Neves.

Neves still has two years left to run on his Wolves deal so the club are not in any rush to tie him down, but it is likely an approach will be made after the transfer window.

The relationship between player and club is good – and they would be willing to include a clause that would allow him to move on to a Champions League club.

Neves has been keen to play in Europe’s elite competition and has always been attracted to the idea of playing for Barcelona – who do have him on their list of potential new recruits, especially if they lose De Jong.

As it stands, Neves is fully focused on the new season with Wolves and making sure he is in the Portugal team at the winter World Cup in Qatar. He is set to start in their Premier League opener at Leeds on Saturday.

Lille’s Renato Sanches had been another player mooted as a possible alternative midfield target at United but Sky in Italy are reporting he is set to undergo a medical with Paris Saint-Germain.

Wolves, meanwhile, have made signing a striker a priority before the deadline, after Raul Jimenez suffered an injury ahead of the opening game of the season.

Adama Traore, who is also currently out with a knock, may seek a move away before the deadline too after spending the second half of last season on loan at Barcelona, but no concrete option has yet materialised for him.

Where will Man Utd turn if they don’t sign De Jong?

Barcelona president Joan Laporta says he will do his best to keep Frenkie de Jong at the club amid his ongoing transfer saga with Manchester United.

“We know Frenkie de Jong has been Manchester United’s priority target, but with the deal dragging on, alternatives will come into play and one of the names we know they have looked at and have been interested in is Ruben Neves of Wolves.

“There is a long-standing interest from the Old Trafford club because of his stylistic profile, incredible passing range, a threat in terms of goalscoring and he controls the tempo really well – all the things you want in an anchor in a progressive side.

“We know Wolves value him upwards of £60m. They wouldn’t want to lose him necessarily, but United have to start considering the fact the longer the De Jong saga drags on with no resolution between him and Barcelona, what else can be done?

“From United’s end, though, they remain quite confident in their agreement with Barcelona for De Jong and are quite confident that the player does indeed want to join them.

“The other name loosely floated has been Renato Sanches, who can play as an anchor, but is better when used as a box-to-box midfielder. But he’s also been linked with PSG, so I wouldn’t put too much stock into that name.”

“Frenkie de Jong remains the No 1 choice for Manchester United and I’m sure, privately, they have set themselves a deadline.

“The transfer window is open until September 1 and Erik ten Hag has said he needs De Jong because he is intrinsic to how the team is going to play under him. So they are going to try everything they can to try and sign him.

“Privately, this deadline has not arrived yet because United must be getting some kind of encouragement from the De Jong side or from Barcelona to suggest this deal can still be done.

“That’s not to say they are not looking at alternatives like Ruben Neves and, to a lesser degree, Renato Sanches. They are keeping those alternatives warm for if the De Jong situation doesn’t materialise in the way they want it to.

“I just wonder if, come August 13, whether we’ll have a better idea. Joan Laporta has mentioned that date as the registration date for Barcelona’s new signings. Do those players need De Jong to be sold to accommodate them?

“If that’s the case, it’s little wonder Manchester United are sitting back because they don’t want to get involved in everything that is going on at Barcelona and they already have a broad agreement.”

Are Man Utd really going to keep Ronaldo against his will? 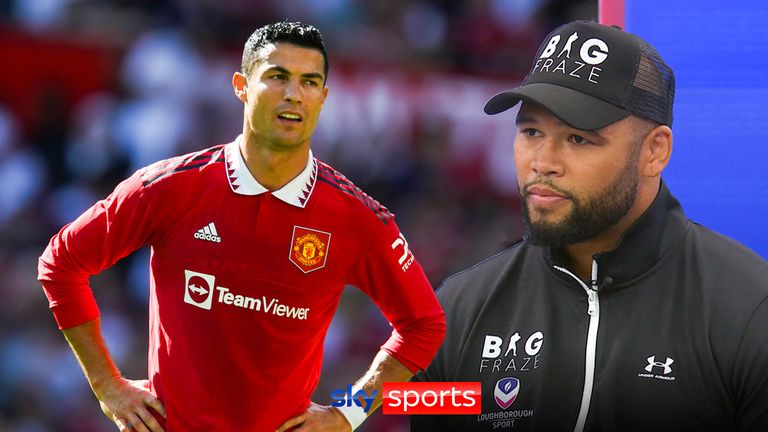 Heavyweight boxer and Manchester United fan Frazer Clarke shares his thoughts on the team ahead of the new season.

“I think what Cristiano Ronaldo’s advisors will be saying is that other clubs have terminated players’ contracts – for example, Inter Milan are doing it with Alexis Sanchez and they have done it with Arturo Vidal, too.

“One way to solve this issue would be if Ronaldo’s contract was terminated. But there’s no indication that’s something Manchester United are willing to do at the moment.

“If you bear in mind that the player wants to leave, ultimately I think he is going to get his own way regardless of what Manchester United are saying.

“Of course, they have to let it be known that he is not for sale and he has another year on his contract, but are they really going keep a player of his stature against his will?

“Henry Winter put it very well in The Times – the intro to his column was ‘Erik ten Hag is the future of Manchester United; Cristiano Ronaldo is the past’.

“Whatever way you look at it, Ronaldo is the past and Henry went on to say that he thought it would be best for all parties if Ronaldo did get his way and United let him leave.”

‘Saying Ronaldo is for sale could drive his price down’

The Transfer Show panel discuss possible destinations for Cristiano Ronaldo, with the Manchester United striker’s future yet to be resolved.

“Ronaldo and his representatives have put Manchester United in quite a difficult position because it is exactly a month since he made it clear that he wanted to leave the club and he wanted to play for a Champions League.

“At the time, I – like many, I’m sure – thought that Jorge Mendes was going to immediately present the club with an offer they could talk about. But there was no offer.

“In effect, I think what they were trying to do was to drum up interest for Ronaldo, so now United find themselves in a position where they have got an unhappy player; Erik ten Hag is having to deal with him, but yet they do have to have that public stance that he is not for sale.

“Saying anything other than that would drive a potential price down.”

Reporter notebook: How Ten Hag is making his mark at Old Trafford

There is a pause, the three or so seconds allowing a technical staffer to offer his most accurate assessment of the manager’s debut pre-season in charge of Manchester United.

“There can be no doubt, this is Erik ten Hag’s club.”

The summation does not require elaboration for those who witnessed the Dutchman from close quarters during United’s tour of Thailand and Australia.

Ten Hag is in control, his influence stretching not solely to the large details at the club such as operational structure, but even the little ones like preventing the players from visiting and being filmed on the set of Australian soap Neighbours.

Nothing escapes the manager, from the squad’s media commitments to the exact spacing between cones during training drills which he tends to measure himself.

When something doesn’t feed into his “highest standards” ethos, there is no silence.