The debate surrounding use of the whip in horse racing is set to bubble to the surface again this week with reports suggesting a major crackdown on serious breaches will soon come into effect.

It comes as the British Horseracing Authority (BHA) get set to publish a report on Tuesday featuring a series of recommendations regarding rules, guidelines, penalties and procedures, formulated by the Whip Consultation Steering Group.

A report in the Daily Mail suggests that any jump jockey who strikes their mount 12 times could have their horse disqualified and be suspended for up to a month, with Flat riders penalised in the same way if they were to strike their mount 11 times, unless a rider from either code is deemed to have acted for safety reasons.

In April’s Grand National at Aintree, jockey Sam Waley-Cohen was handed a nine-day ban and fined £400 for excessive use of the whip during his winning ride on Noble Yeats.

What are the current rules and punishments?

Jump jockeys are currently limited to eight strikes of the whip with Flat jockeys restricted to seven before punishments are handed out.

According to the BHA’s official guidelines, the use of the whip in British racing is restricted to safety, correction and encouragement, with the latter defined as an aid to activate and focus, while coercion of a horse is not permitted.

‘Acceptable use’ of the whip

The whip may be used to encourage a horse to perform at its best only when the horse is in contention during the race, the horse is able to respond and the horse is given time by the jockey to respond

Use of the whip for encouragement is not about simply making a horse run faster. It is to focus and concentrate a horse so that it performs at its best during a race

The whip may only be used on the horse’s body where, in the context of the race, it will not cause pain

The stimulus provided by the whip must be limited, and the whip only used a certain number of times, so as not to compromise the welfare of the horse

Stewards also currently analyse the force with which the whip is used, whether the horse had time to respond, whether a horse was in contention or clearly winning and if the whip was used in the correct place. 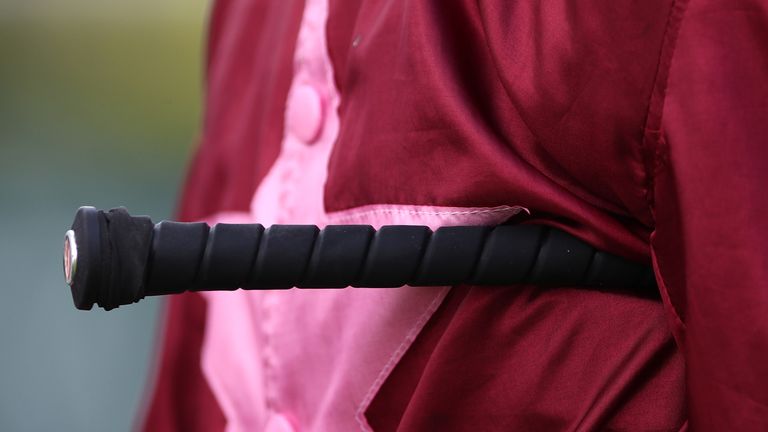 Is the whip a welfare issue?

The whip has changed and been developed hugely over the years, with the current foam-padded and energy-absorbing design created in collaboration with the RSPCA.

British racing uses just one accredited supplier to ensure all whips conform to the BHA’s standards.

Whips are regularly checked by the clerk of the scales at racecourses to monitor their condition.

What the BHA have said

The BHA’s chief regulatory officer Brant Dunshea told Sky Sports Racing this week he would not comment on specifics of the whip report until its publication on Tuesday, but added: “Disqualification is a very serious road to take when you’re talking about race results and the effect on gamblers. It should only be applied in the most serious circumstances.

“[Tuesday’s report] is a thorough and comprehensive report which has taken 18 months to come together. It has been done in a thoughtful, considered and very structured way.”