Vladimir Putin claimed on Friday that his country had weathered the worst of the sanctions imposed by the US and Europe, as Russia’s president vowed to achieve the goals of its military aggression on Ukraine.

Putin told a business conference in St Petersburg that “gloomy predictions about the Russian economy’s future didn’t come true” and that the sanctions had hit European businesses harder — a claim that is not supported by estimates published so far.

“The economic blitzkrieg . . . never had any chances of success,” he said. “The weaponry of sanctions is a double-edged sword . . . European countries dealt a serious blow to their own economy all on their own.”

Since Russia’s invasion of Ukraine in late February, western countries have imposed sanctions which have frozen $300bn of Russia’s foreign currency reserves, cut its companies off from global markets, and disrupted its supply chains.

Putin was adamant that Russia would achieve its military goals, indicating it could annex occupied territories or Moscow-backed separatist areas in the eastern Donbas region. “We will defend the interests of the people for whose sake our guys are fighting, getting wounded, and dying,” Putin said. “There’s no other way. Otherwise what are the victims for?”

Moscow-backed separatist authorities in the Donbas, whose leaders attended the conference, and officials the Kremlin has appointed to run southern areas of Ukraine have said they want to become part of Russia. Putin said Russia would “respect any choice they make”. He stressed that he saw the entire former Soviet Union as “historical Russia.”

The EU has lost its political sovereignty. Its elites are dancing to someone else’s tune, harming their own population.

Though he claimed the US had provoked the war by turning Ukraine into an “anti-Russian bulwark,” Putin said Moscow had no objection to Kyiv’s attempts to join the EU because it was not a military alliance. The European Commission on Friday called for Ukraine to be made an official candidate to join the bloc.

Eurostat, the commission’s statistics bureau, will not publish growth figures for the second quarter, which will cover the bulk of the period after Russia invaded, until the end of July.

But the surge in oil and gas prices have severely cut estimates. The OECD recently slashed its forecast for the eurozone’s expansion this year from the 4.3 per cent it had estimated in December to 2.6 per cent, and from 2.5 per cent to 1.6 per cent for 2023.

For Russia, the downgrades were much steeper. Its economy is expected to contract 10 per cent this year, according to the OECD, a downgrade from the 1.9 per cent of growth anticipated in December. The projection for 2023 was cut from 1.6 per cent growth to a 4.1 per cent contraction.

Putin said that Russia had taken inflation under control at 17.6 per cent and boasted that it was below levels in some European countries. This is only true for Estonia and Lithuania, where energy prices have soared after the Baltics moved to cut off supplies of Russian energy once the war began. The eurozone average is, at 8.1 per cent, less than half the Russian rate.

Western central banks have blamed the conflict for exacerbating inflationary pressures by triggering sharp rises in the cost of energy and food. Putin rejected the claim, saying the west was using the conflict as a “lifebuoy to blame Russia for their own mistakes”. Western countries were paying the price for years of ultra-loose monetary policy and high government debt levels, he said. 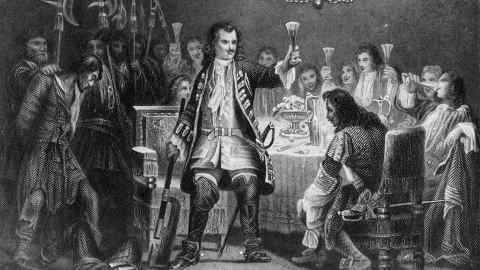 He accused the EU, historically Russia’s largest trading partner, of bending to US pressure. “The EU has lost its political sovereignty. Its elites are dancing to someone else’s tune, harming their own population. Europeans’ and European businesses’ real interests are totally ignored and swept aside,” Putin said.

While Putin played down the economic damage wrought by the sanctions, Russian economic officials in attendance were visibly rattled. Herman Gref, chief executive of state-run lender Sberbank and a longtime confidant of Putin’s, said the export-driven economic model was now “poison” because it made the rouble too strong against the dollar.

Instead, he said the sanctions had restricted Russia’s own grain exports. “Famine in the poorest countries will be on the conscience of the US administration and the Eurocrats,” Putin said.

The sanctions, which have wiped millions of dollars off the wealth of rich Russians, had vindicated his warnings that Russian oligarchs and executives were taking too many risks by snapping up assets in the west. “Real success is possible only when you tie your future and your children’s future to the motherland,” he said.