It’s fair to say that the Persona series is full of enigmatic characters, and Persona 4 just might have the most interesting cast of the bunch, and that’s thanks to people such as Adachi, who certainly adds plenty to the story, on top of being quite a perplexing character that you’re sure to want to learn more about.

So, we’ve put together this Persona 4 Adachi guide, and with it, we aim to help you familiarise yourself with the character ahead of the Persona 4 Switch release date. We dive into who he is, what role he plays in the story, who his voice actors are, and more.

Anyway, onto everything you need to know about Persona 4’s Adachi.

Who is Persona 4’s Adachi?

The loveable Adachi is a bit of a mess up, but his heart’s in the right place, right? Even those that come off as incompetent have their uses, and are capable of more than perhaps they let on, and this certainly is the case for Adachi. This police detective pops up frequently throughout Persona 4’s story, and thus the Investigation Team is somewhat familiar with him. 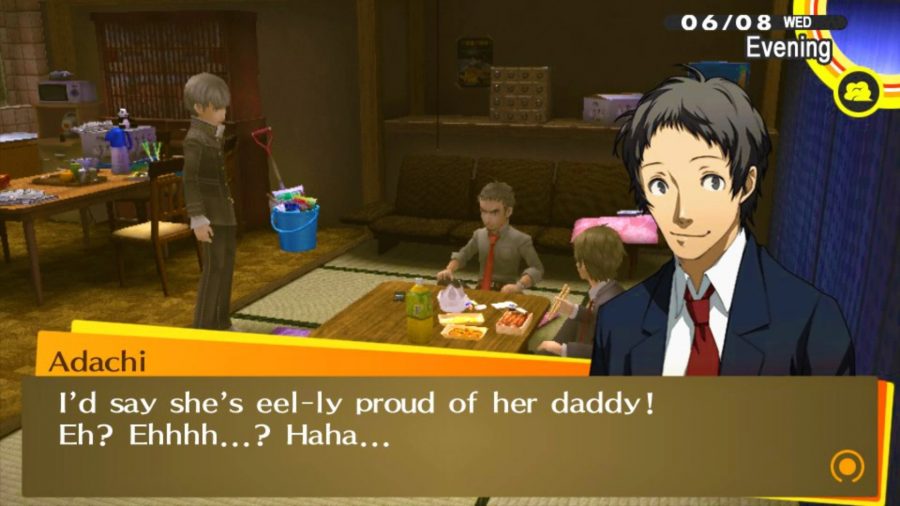 Adachi comes off as a very friendly guy who just wants to do all he can to end the string of murders that plague Inaba. He’s a cheerful guy, with a jovial touch that often means he brings light to even the direst of situations. However, we have more to say about Adachi, but from this point on, we must slap a big ol’ SPOILER warning.

Seriously, if you don’t know much about Persona 4 and want it to remain that way, skip this next paragraph and head to the ‘Persona 4 Adachi’s skills’ section.

Okay, here you go. Everything that we’ve said until now about Adachi is a lie! This is just how he portrays himself. In actuality, he’s a ghastly being with little care for human life. In fact, he cares so little that he murders people for his own amusement. Yes, he’s the murderer that stalks Inaba, and thus is the main antagonist of the game.

When it comes to combat, despite being somewhat incompetent as a police detective, Adachi is charismatic in battle, is able to manipulate his foes, and has access to the midnight channel. So, surprisingly, he’s an efficient guy in combat and can make things awfully difficult for his opponents.

Who is Persona 4 Adachi’s voice actor?

In Persona 4’s Japanese version, Mitsuaki Madono portrays the character, while Johnny Yong Bosh takes up the mantle for the English variation.

There you have it, everything you need to know about Persona 4’s Adachi. Now, if you need something to play while you wait for the newest release of the game, our best Switch RPGs guide has some great suggestions.