“If I was Manchester City I would have given Brighton whatever they wanted for Cucurella,” Sky Sports’ Kris Boyd said earlier this month.

“I think he’s as good as anyone in the Premier League. He suits City’s attacking style of play. I get excited every time I see Cucurella play – he’s a fantastic player.”

Having seen their initial £30m bid rejected, Manchester City are about to test Brighton’s resolve.

Such has been the excellent running of the south coast club by Tony Bloom, Brighton can afford to be relaxed about Pep Guardiola’s admiration for his countryman.

Cucurella was only signed in a £15m deal 12 months ago from Getafe, but the player is now worth at least three times that fee.

It is how Brighton like to operate. Benjamin White was sold last summer for £50m to Arsenal having come through the academy at the Amex Stadium.

Yves Bissouma was bought for £15m from Lille in July 2018 and has been sold for a £10m profit this summer.

Dan Ashworth may have left his position as director of football (he is on gardening leave ahead of starting his new role at Newcastle) but the foundations at Brighton are firmly in place.

Cucurella has four years to run on his contract and while the chances are he would jump at the chance to work under Guardiola, Brighton are in a position of strength and are in no rush to sell. 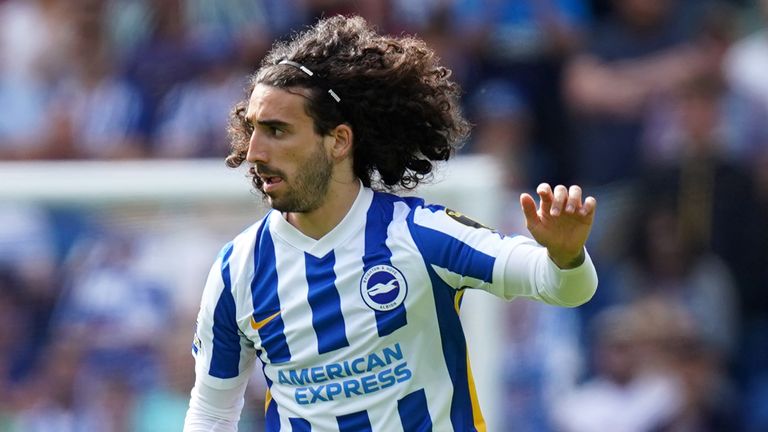 
That City have decided not to stand in the way of allowing Oleksandr Zinchenko to complete his £32m move to Arsenal suggests City will happily move onto other targets if a fee for Cucurella cannot suit all parties.

But the player has all the attributes to become a fans’ favourite at the Etihad Stadium. The 23-year-old will have already endeared himself to some supporters for scoring against Manchester United.

It was the full-back’s first Premier League goal, arrowed high into the net above David de Gea, and it was clear from his celebrations how much the strike meant to him.

Mobbed by his team-mates, Cucurella burst into tears at the thought of realising a long-held dream.

He told Sky Sports: This is a present for the fans and the team and the season. Coming here was difficult in the summer, a new league, new country and new language.

“It is now very exciting for me and my family; when we came, my son was 10 days old. He travelled with me when I changed my city. It is very special.”

As Boyd outlined, there is something infectious about Cucurella, in the same way Pablo Zabaleta became a cult hero among City fans. 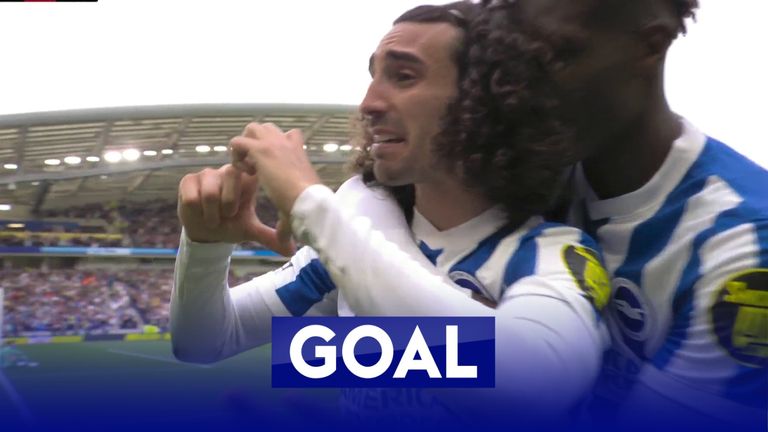 His journey from playing three seasons for Barcelona B – but never for the first team – to the Premier League champions is one you wouldn’t deny him.

Guardiola left Barcelona as manager in 2012 – the same year Cucurella joined the club’s famous La Masia academy from Espanyol. A sliding doors moment, with the pair never coming into proximity with each other.

Cucurella, born and raised in Catalonia, is schooled in the very youth system Guardiola so thoroughly helped raise in standards, but it was through loan spells – first at Eibar and then with Getafe – that he truly was allowed to flourish.

His energy going forward and tenacity to get back show all the hallmarks of a Pep Guardiola player, and his performances last season at left-back compare favourably with those who have been deployed at full-back for City.

Having lavished more than £225m on full-backs since arriving at the club in the summer of 2016, it is not surprising that City see Cucurella as an investment worth pursuing.

Having effectively failed to make the grade at the Camp Nou, Guardiola shouldn’t be put off Brighton’s £50m valuation to finally be united with Cucurella.

At times last season, Guardiola used Aymeric Laporte and Nathan Ake at left-back whenever Joao Cancelo was either on the opposite flank or in need of a rest.

It was certainly a case of a square peg being put in a round hole, and such small margins could have huge consequences in this season’s title race given how City’s challengers have strengthened. They must go again and focus on their perceived weaker areas.

Brighton have rejected a £30m bid for Marc Cucurella from Manchester City – Jamie Carragher has his say.

Jamie Carragher says Man City have lacked an “outstanding” left-back during Pep Guardiola’s time in charge but that Cucurella would provide healthy competition should he move to the Etihad.

Speaking to Sky Sports News, the former Liverpool defender said: “I think Man City have always – really since Pep’s been there – lacked a real outstanding left-back. It was always the position where they’ve had sort of different players at different times.

“You’re never quite sure who plays there every week, where you know it’s Kyle Walker playing right-back. [Joao] Cancelo’s gone in there and been as good as anyone really but I’m sure Pep would like a left-footer there.

“Zinchenko’s moved onto Arsenal so when you ask ‘is he worth it,’ Man City normally spend £40-50m on full-backs. They’ve done that notoriously since Pep came and like any transfer and what you pay – if you play well you think he’s worth it.

“He looks a classy operator when you see him in a Brighton shirt. He plays a similar type of football to Manchester City in possession, so I’m sure he’ll be a good signing.

“It’s something that Man City possibly need now with Zinchenko moving on and having a bit more competition for Cancelo, who can then provide competition on the other side for Walker.”

“Since Benjamin Mendy was arrested last summer, Manchester City have operated without a natural left-back. Zinchenko has filled in manfully for a number of years now. Cancelo made the position his own last season – to the point where he was named in the PFA Team of the Year by his peers.

“Zinchenko is now on the verge of joining Arsenal. While Cancelo has the versatility to play on either side of defence, more depth is a natural requirement for the club.

“Cucurella has adapted to the Premier League with ease.

“He was named Brighton’s Player of the Season for 2021/22, a campaign in which they achieved their highest-ever league finish.”

Manchester City kick off their Premier League title defence with a visit to West Ham on Sunday August 7, with the game live on Sky Sports.

The first Manchester derby of the season is at the Etihad on October 1, before City travel to title rivals Liverpool on October 15.

The champions’ final game before the season takes a break for the winter World Cup is at home to Brentford on November 12 and when the campaign resumes, they face Leeds at Elland Road on Boxing Day.

City have a tough start to 2023 with tricky-looking back-to-back clashes at Chelsea and Manchester United on January 2 and 14 respectively.

As the campaign draws to a close, Pep Guardiola’s side have their return meeting with Liverpool, at the Etihad, on April 1 and then host Chelsea on May 20, before concluding at Brentford on May 28.