After what could be considered to be somewhat of a fad, the rhythm game genre feels underrepresented on Switch. There are a few indies here and there, but the heyday of guitar hero, DJ Hero, and Wii Music, is well and truly over. I’ve always had a particular love for the genre, perhaps because the gameplay demands so much immediate concentration and precision that it actually engages my ADHD brain.

Well luckily for me, here comes another great little rhythm game for the Nintendo Switch in the form of Loud from developer Hyperstrange. The story of one girl called Astrid, Loud chronicles her journey from bedroom artist to an accomplished performer, and all the trials and tribulations in between. It’s a great premise for the game if a little well-worn.

Loud has a pretty solid commitment to its gameplay though, which works in its favour. A rhythm game of old, where you match moving icons to button presses, all to the beat of the music, just like Guitar Hero taught us in our living rooms so long ago. It wasn’t broken then, and this game doesn’t fix it but instead adapts it charmingly for controllers and this specific story.

If you’ve played the aforementioned Guitar Hero you’ll get to grips with Loud very quickly. Here, instead of a guitar’s neck, the music notes are aligned in six lines moving towards the centre of the screen. Three on the left, with one low down, one on the middle, and one on the top, and then this is mirrored on the right. These lanes are all mapped to a specific button, with the right-hand side mapped to X for the top lane, A to the middle lane, and B to the bottom, each fitting their position on the screen to the one on the controller. 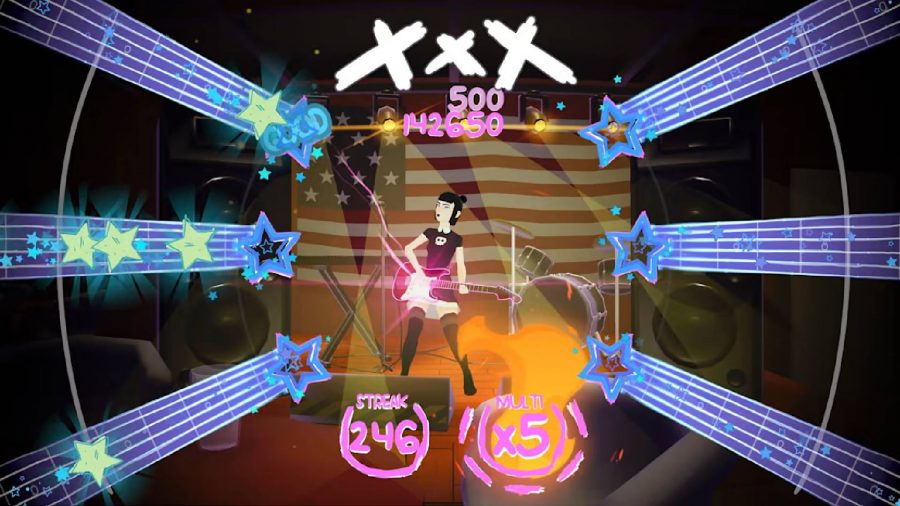 Where things get a touch difficult, is on the left-hand side. You might notice there isn’t a series of buttons, but instead a D-Pad. So the left lanes are assigned to the Up, Left, and Down buttons on the D-Pad respectively. This is wildly less comfortable than the actual separate buttons on the right side of the controller and is only made marginally less awkward with Joy-Cons, as the buttons on those are a little too small for my liking anyway. It’s a problem with no clear solution, but perhaps something could have been done to map the buttons to the L triggers instead? Things got way too clumsy for my liking, and that’s not what you want in a game all about precision and timing.

Luckily, when it works, it works. Loud opens with a calibration test (very much appreciated) and the timing of the music to the moving icons (lovely hand-animated little stars) feels very natural. You can get a perfect, a good, or a miss on a button press. I never felt betrayed by this system, and button presses feel satisfying going along with the fantastic score. Though more on that later. Another great element is the actual mapping of the icons to the music, or how aligned the button presses are to the actual song. This varies depending on the difficulty, but I always feel like I’m a part of the song, not battling against it, which is a very important feeling to nail. 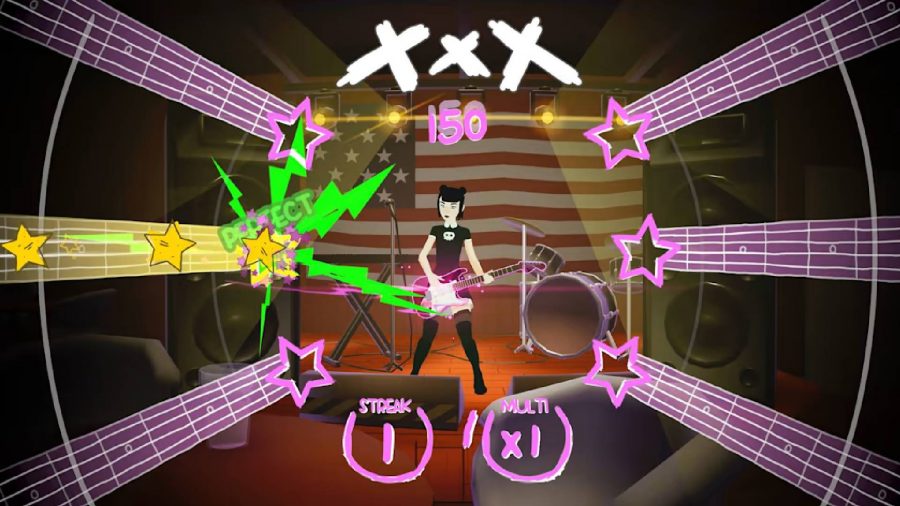 While the story is certainly in the background for Loud, it’s still a touching, modest tale that’s told quite well through illustrations and voice acting. The performer who portrays Astrid does a great job, bringing a great sense of earnestness and aspirational attitude to her, and it sells the journey. Seeing Astrid move from gig to gig, and actually beating each level to achieve it, is a really lovely feeling. The difficulty really takes a turn from the second area as well, so you’re gonna have to earn this.

You can play each level on chillin’, skillin’, or grindin’ difficulty, where each choice raises the stakes respectively. Most players can probably complete this two-to-three hour story comfortably on chillin’, with the occasional retry, but from skillin’ onwards you’re in for a real test. It gets particularly tough when moving from one side of the screen to the next, but often the button presses group on the left or right side of the screen for a while. Depending on your coordination level, you may struggle when whipping from the left side to the right, and vice-versa, like myself. But ultimately, it works and really sells the gameplay on higher difficulties, while really complementing the stellar soundtrack. 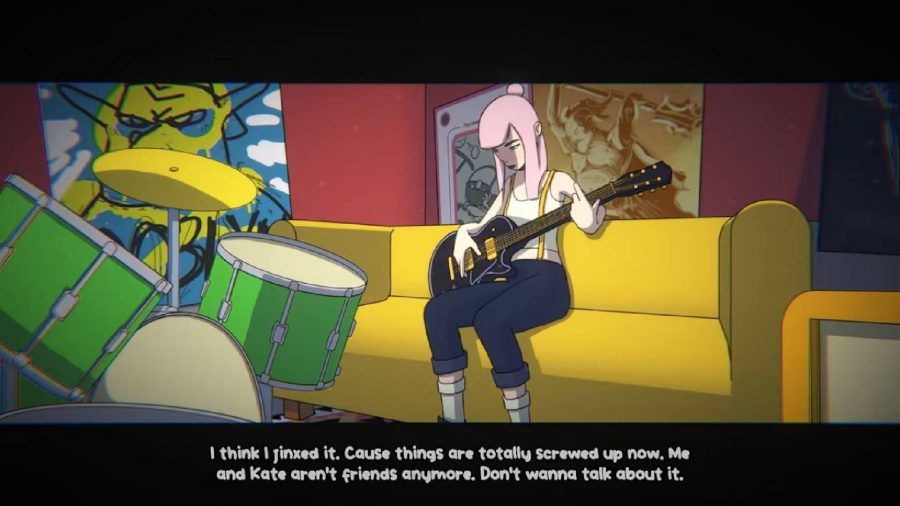 A rhythm game is nothing without a killer score, and luckily the one on offer here is fantastic. A grungy, fuzzy, guitar-led score that reminds me of Beck’s work on the Scott Pilgrim Vs The World movie, Loud’s score reeks of garage-Americana and indie-rock bands like Yeah Yeah Yeahs, and Sleigh Bells, if a little more contained. While often video game soundtracks can be loose and ambient, Loud isn’t afraid of a hook either, which not only helps sell the music but is utterly essential to the coordination of the gameplay. If there wasn’t a good, clear, lead instrument to play along to, it would make navigating the gameplay much harder. While it’s not quite about to top the charts, it’s well produced, catchy, and constantly impressed me, as it also helps to chart Astrid’s musical growth.

In terms of final things to mention, Astrid also unlocks a few different outfits throughout the game, which are a neat extra. There isn’t many, but it’s nice to be able to swap your outfit and guitar at will. Finally, there’s also a free play mode, where every song you clear at least once is available for you to play again at any difficulty. Once you’ve cleared it you can see your score, and aim to nail an S on every song. I’m not quite sure if this unlocks anything as I’m nowhere near that, but at least you can easily play through the great songs when you want. 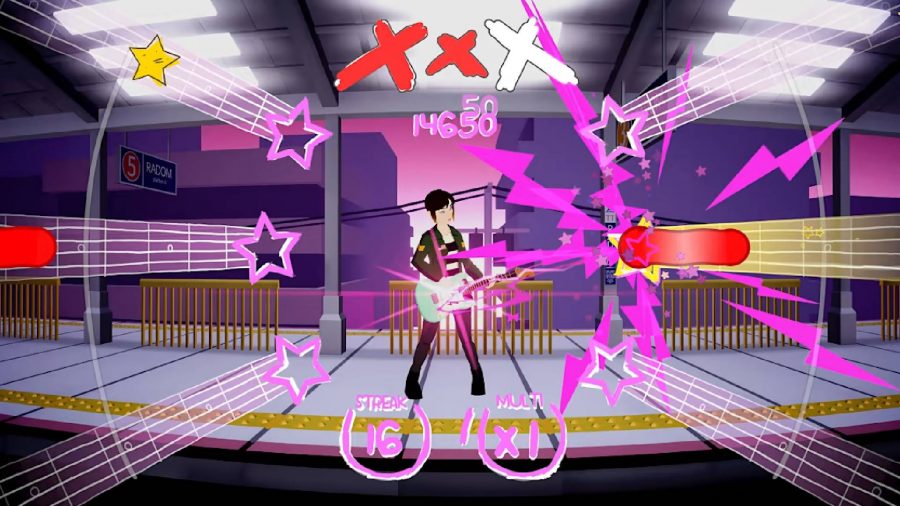 A modest but confident title, Loud feels like a rhythm game with a beating heart, and it’s all the better for it. The gameplay and story combine, helping you feel like you’re orchestrating Astrid’s ascent through the music industry, and accompanying her through the highs and lows. I could do with a more comfortable control method, and occasionally lose myself in the frantic swings between different notes, but once I’m in the zone, Loud feels incredible. I hope we get to see more of Astrid in the future.