Ever since the announcement of the Klonoa Phantasy Reverie Series I’ve been one eager beaver, as I love the original Klonoa. It’s one of my childhood games, yet I rarely see anybody discuss it – I guess that’s down to its initial release landing in 1997, a time where Mario, Crash Bandicoot, and Sonic firmly dominated the platforming genre. Then, when you throw in other PlayStation games such as Pandemonium, you can kind of understand why it’s not quite so well known.

Nonetheless, Klonoa does boast a loyal fanbase, and I can certainly see how it would garner new fans, especially with how fun the remastered renditions of Klonoa: Door to Phantomile and Klonoa 2: Lunatea’s Veil are. In case you’re wondering, the latter of those titles is from 2001, and was initially a PlayStation 2 title. And yes, it’s every bit as fun as its predecessor.

In both games, you take on the role of the titular Klonoa, and in Klonoa: Door to Phantomile you go on a quest, in a world that’s fueled by the dreams that people have at night. That includes our protagonist, as the anthropomorphic animal is plagued by nightmares that see an airship crash into a mountain, and sure enough, this becomes a reality.

Naturally, as any of us would (unless you fear the unknown), Klonoa and his lil pal Huepow, decide to make the climb up the mountain in order to find out what the situation is, and that’s when this story truly gets underway. You’re introduced to the game’s main antagonist, the evil ghadius, a ghastly being that would see Phantomile enshrouded with nightmares. 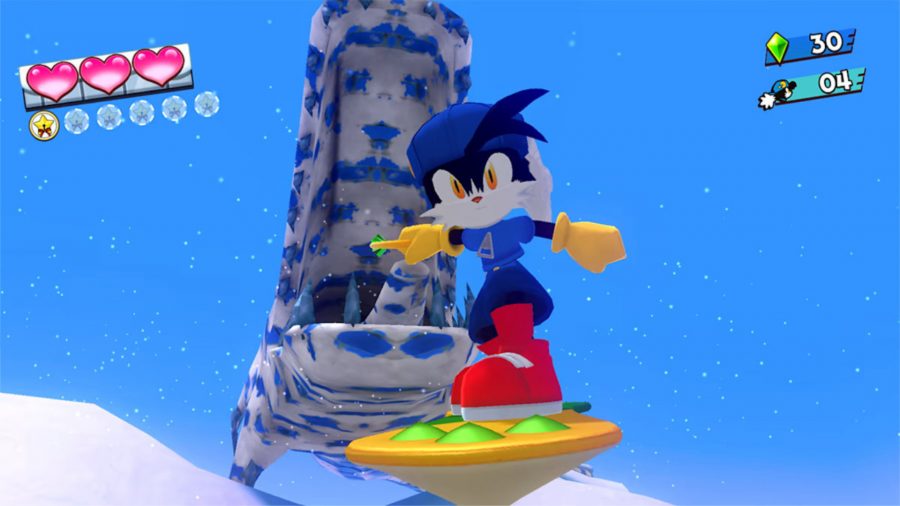 Of course, there’s no way we can let this happen, and thus a long journey full of remarkable platforming ensues. As soon as I performed that first jump, I was thrown back to my childhood, the kid in me squealed with joy as I continued on my merry way, and it’s fair to say that I was more than a little awestruck by my surroundings. Klonoa Phantasy Reverie is stunning.

The 2.5D is still as fantastic as ever, but in today’s graphics, it feels like an entirely different world, especially with how bright and vibrant it is. This is a vivacious remake if ever I’ve seen one, and Klonoa certainly deserves it. With each new level I entered, I had to ask myself ‘how is it so pretty?’ Honestly, it fills me with joy. If you’re having a bad day, this game can put a smile on your face through the exuberance it emits.

As for the level design itself, each one feels near seamless, and is crafted in an oh so clever way. You see, while you predominantly experience a side-scrolling platformer with 3D rendering, the fact that it implements a 2.5D structure adds a new depth to the game, and is part of what makes Klonoa a standout in an overflowing genre that many enter, yet few fail to reach the heights of legends such as Crash Bandicoot. Well, Klonoa is also in this league. 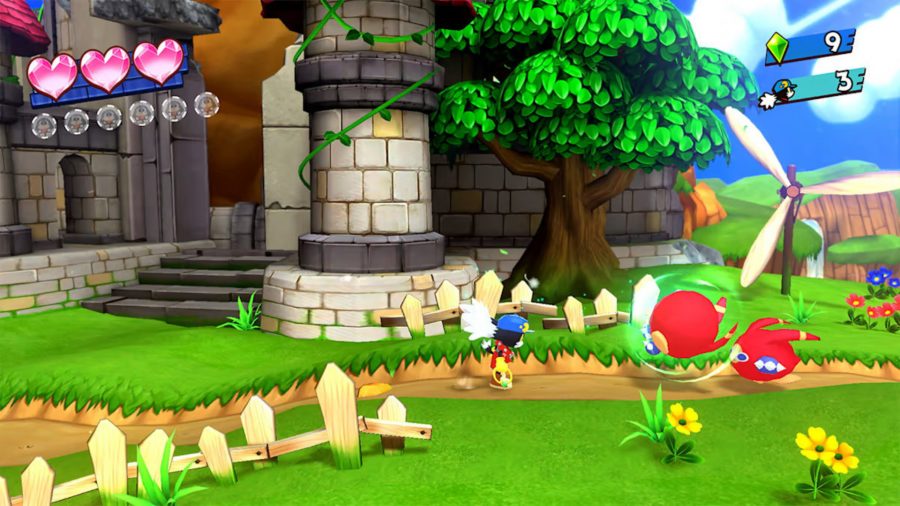 Furthermore, despite the clever layout of each level, there’s enough variation in the environments to give you a constant feel of freshness. Though I do have to give a shout out to the jungle levels, as they tick all the right boxes for me, as they tread the fine line between the colourful vibrancy of a platformer, while also ascertaining the somewhat darker nature of a forest – clever design indeed.

Besides the majestic nature of your surroundings, there are enemies to consider throughout each level, as well as a couple of collectables for you to grab, and funnily enough, these go hand in hand. You see, while Crash has his spin, Sonic his dash, and Mario his jump, Klonoa has a ring that allows the animal to grab hold of enemies and throw them. Yes, this is how you defeat enemies, you can even launch them at each other – it feels a little like bowling.

However, one of the more unique features in Klonoa comes in the form of its double jump, a mechanic you rely on your enemies to utilise. That’s right, once you grab an enemy, they float above your head until you decide what to do with them, and if you double tap the jump button you can use your foe to get some extra height. Besides this, as you progress through the game, they become useful in a number of ways, including knocking over boulders and smashing crates, so you can continue on your quest. 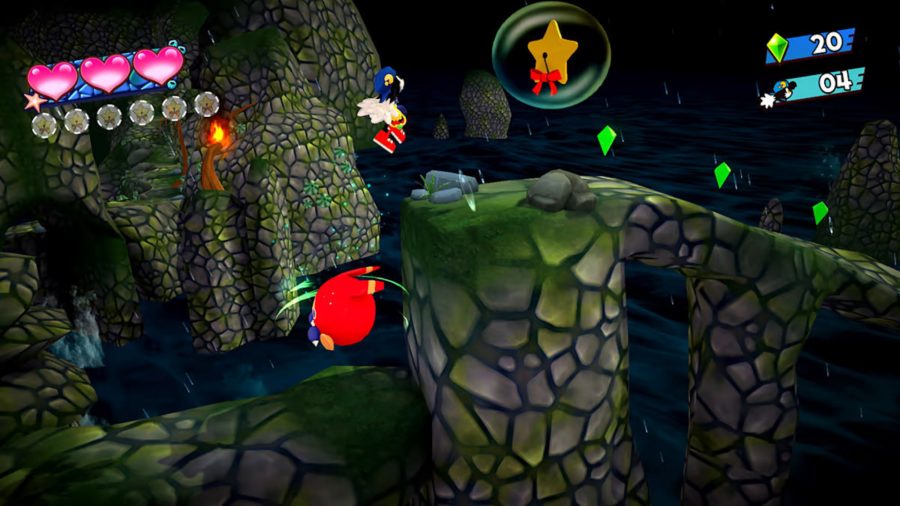 Fortunately, it’s easy to go on your merry way as the controls are seamless, the platforming feels smooth, if you fall down a hole it’s not due to feeling like there’s an imaginary hand pulling you back, but rather you misjudge the distance (yes, I did this many times). However, there is one gripe I have, and that’s attacking enemies, as you need to be relatively close in order to ensnare them with your ring, but on occasion, Klonoa would turn around instead of grabbing an enemy. Honestly, it was almost as though the titular character was trying to tell me ‘not today satan, not today’.

Mind you, that’s the only real complaint I have, as everything else feels fair, and normally, it’s not too taxing to grab hold of your new makeshift bowling ball, and the most important factor of the game – the platforming – is sound. If that suffered in any way, then we’d have problems.

So, I’ve talked a lot about the first game, and the second game is honestly much of the same, intricately designed platforming segments marinated with a fun story and characters that you can’t help but love. Furthermore, just like in Klonoa: Door to Phantomile, Klonoa: Lunatea’s Veil features some fun boss fights, all of which have something unique about them, which helps to avoid the gameplay becoming too repetitive. 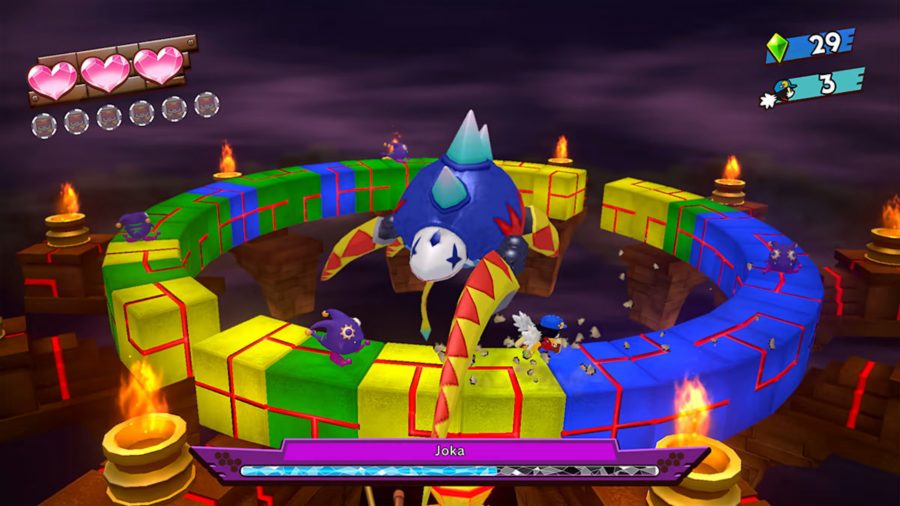 In fact, when you begin a boss fight in these games (on easy mode, at least), the game even tells you how to approach the fight, and this is a mechanic that I can appreciate, as there’s nothing more irritating than being stuck on a boss in a platformer with no clue how to rid yourself of their annoying existence.

When it comes to the performance aspect of Klonoa Phantasy Reverie on Switch, I’m unable to render any judgement on it at this point, due to the fact that my current copy is on PS5. However, as soon as I can, I’ll add my thoughts on the game’s performance on Nintendo’s console.

All in all, the Klonoa Phantasy Reverie Series is a splendid platformer, and it fills me with joy to know that many more people get to experience these beloved games. Who knows, perhaps this will lead to even more remasters. For now though, I encourage everyone to give this game a try, the joy it emites is infectious, the platforming segments rival that of Mario and Crash, while it also succeeds in reminding us that it stands alone, and that Klonoa has its own identity.