The Boston Celtics have added themselves to the list of trade suitors for wantaway Brooklyn Nets All-Star Kevin Durant.

ESPN reported Monday the ‘Durant Sweepstakes’ are still in the browsing stages with no deal imminent, but the Eastern Conference champion Celtics are the latest to be added to a crowed picture along with the widely reported interest from the Phoenix Suns, Miami Heat and Toronto Raptors.

Just before the opening of NBA free agency, Durant formally requested a trade from the Nets. The 12-time All-Star reportedly is interested in a reunion with the Golden State Warriors, but it’s unclear whether the NBA champions are in favour of bringing him back.

The Celtics could present a package that includes All-Star Jaylen Brown as part of the day. Brown is 25 and has two years remaining on his current four-year, $106.3m contract.

All-Star Jayson Tatum, per the report, is considered off-limits in trade discussions. 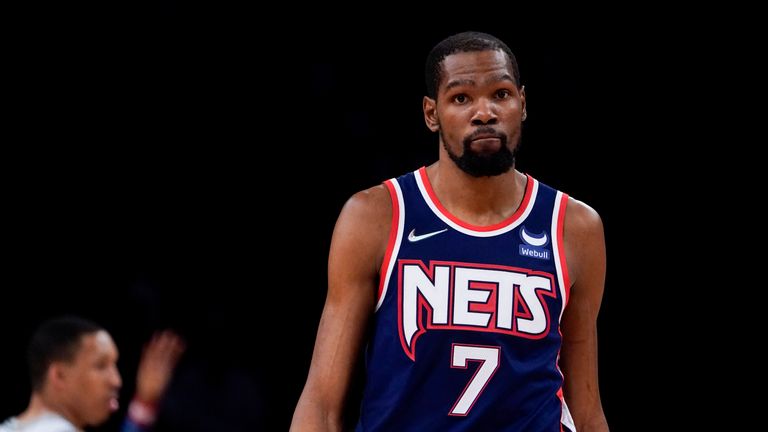 Kevin Durant slammed home this wide-open dunk in the Nets’ defeat to the Boston Celtics, who advanced to the next round of the NBA Playoffs

A two-time NBA Finals MVP and a four-time scoring champion, Durant joined Brooklyn as a free agent in 2019 alongside Kyrie Irving.

Durant averaged 29.9 points, 7.4 rebounds and 6.4 assists in 55 games this past season with the Nets, who traded fellow All-Star James Harden to the Philadelphia 76ers during the season in a blockbuster deal involving Ben Simmons.

Irving, a seven-time All-Star, picked up his $36.5m option, though the Nets are said to be willing to listen to trade offers for Durant.

The Nets were swept by the Celtics in the first round of the 2022 playoffs.