The head of Japan’s biggest discount store has vowed to defend its price tag of ¥100 ($0.75) per item despite an existential threat to the business from global inflation and the plunging yen.

Seiji Yano, the president of Daiso Industries, said in his first-ever interview with media that the store was reviewing its product mix to ensure its survival.

“Of course, our profits are squeezed,” said Yano, adding that he was prepared to ride out the storm. “We have not raised our prices. We will protect the price of ¥100.”

For the past 30 years, ¥100 stores — which have exploited the yen’s buying power for cheap goods in China and south-east Asia — have steadily increased market share in a society where consumers have a deeply entrenched belief that prices will keep falling.

The rapid expansion of the discount stores has become a symbol of Japan’s decades of deflation, with the shops carving out a $7bn corner of the retail market.

Japan now has more than 8,400 ¥100 stores, with about 6 per cent of those opened since the outbreak of Covid-19, according to business information company Teikoku Databank.

However trade disruption caused by the pandemic, the weak yen and the war in Ukraine have exposed the fragility of the ¥100 store business model.

The yen’s rapid fall of more than 20 per cent against the dollar in the past 12 months has been particularly painful since a bulk of Daiso’s products are imported from overseas plants.

“The question is how we make the best total balance [in product mix] while maintaining strict conditions that customers only pay ¥100 per item,” said Yano, who took over the company from his father in 2018.

The disruption caused by China’s zero-Covid policy continues to have an impact on Daiso’s operations, said Yano. “Although the supply chain has mostly normalised today, excluding logistics cost, the delay in delivery is still ongoing to some extent,” he said. Logistics costs were double in comparison with pre-pandemic levels, he added.

As part of its strategy shift, the company is also investing deeply in two brands focused on generating sales mostly from ¥300 goods. Daiso is expected to open 520 new stores in Japan and overseas this fiscal year through February 2023, more than 30 per cent of which will be under the two brand names.

Yano’s other tactic is to shift more production back to Japan. Daiso has been gradually bringing manufacturing capacity to the country as costs for production abroad and logistics rise.

About 65 per cent of its products are now produced overseas, down from 70 per cent five years ago, said Yano. Daiso, which has its own factories in Thailand and Vietnam, is in negotiations with landowners to build another plant in western Japan expected to be open in 2028. 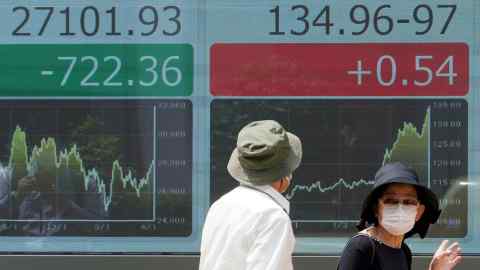 Daisuke Iijima, analyst at Teikoku Databank, said a business model that increases revenue with a fixed price of ¥100 could be a “significant long-term burden on growth” since a profit squeeze is expected to hinder investment.

“But customers won’t come unless ¥100 items are on shelves,” Iijima said.

Despite a series of headwinds, Yano said he would not compromise on Daiso’s quality.

“It’s totally unacceptable to say that ‘because it’s ¥100, it’s fine like this with a bit of twist’,” Yano said. “That is why we feel that consumers in Japan and also in other parts of the world buy Daiso.”