Vincent Kompany enjoyed a winning start to life as a Championship manager as his new-look Burnley side beat Huddersfield 1-0 in the opening match of the 2022/23 Sky Bet EFL season.

The Manchester City legend replaced Sean Dyche at Turf Moor in June after three years at Anderlecht and watched on as debutant Ian Maatsen coolly swept in the opener after just 18 minutes.

The Terriers – who were beaten by Nottingham Forest in the play-off final 61 days ago and lost head coach Carlos Corberan earlier this month – struggled to gain a foothold in the game and, though they moved through the gears after the break, were unable to muster a single shot on target.

Late on, Scott Twine almost marked his first Burnley game since a £4m move from MK Dons with a trademark free-kick that dipped and rattled the woodwork but, ultimately, a single goal sufficed.

How the Kompany era got off to the perfect start

Kompany did not promise miracles ahead of his return to English football and made it clear his Burnley players would need time to adapt to a new division and a new way of thinking. Priced at 9/1 to win the title before kick-off, they were not thought of as immediate favourites either.

But the way they started at the John Smith’s Stadium suggested otherwise. The Clarets were aggressive in possession, their movement up the pitch was flowing, their passing quick and crisp.

The visitors should have won a penalty when Tom Lees slid in on Ashley Barnes as he collected a neat ball from Josh Cullen, but after Cullen and Barnes both went close over the next few minutes, they took a well-deserved lead when Maatsen picked up the scraps after his own pass into the box and caressed the ball past Lee Nicholls. 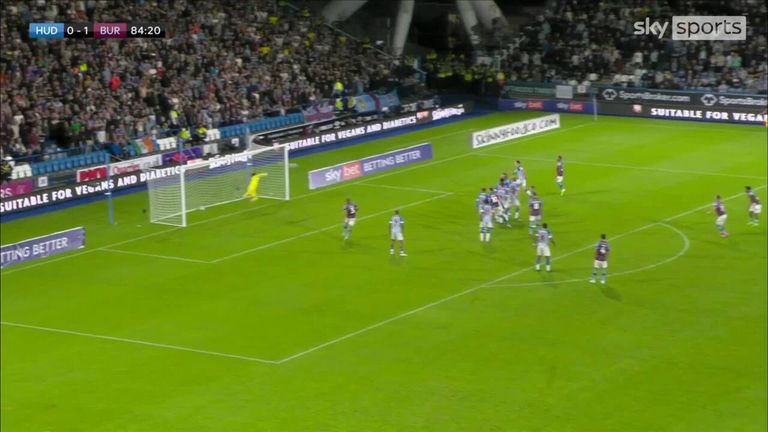 Scott Twine comes so close to making it 2-0 for Burnley with an excellent free-kick, but it hits the post!

Nicholls was soon called into action to deny Connor Roberts from point-blank range as Burnley looked to quickly double-down on their lead, before Dara Costelloe struggled to connect with a loose ball on the edge of the six-yard box.

Huddersfield looked nervous in the rare moments they crossed the halfway line and missed the influence of Lewis O’Brien and Harry Toffolo – both of whom joined Forest this month – leading to loud boos at the break.

Danny Schofield rallied his troops sufficiently to turn the tide somewhat thereafter, with Sorba Thomas able to show glimpses of the creative streak that served his side so well last term, while the introduction of Tino Anjorin and Jack Rudoni saw the hosts increase the tempo of the match.

They had nothing to show for it, however, and were almost punished when Twine struck the woodwork late on, with the Clarets leaving with the first three points of the campaign.

Man of the match – Josh Cullen 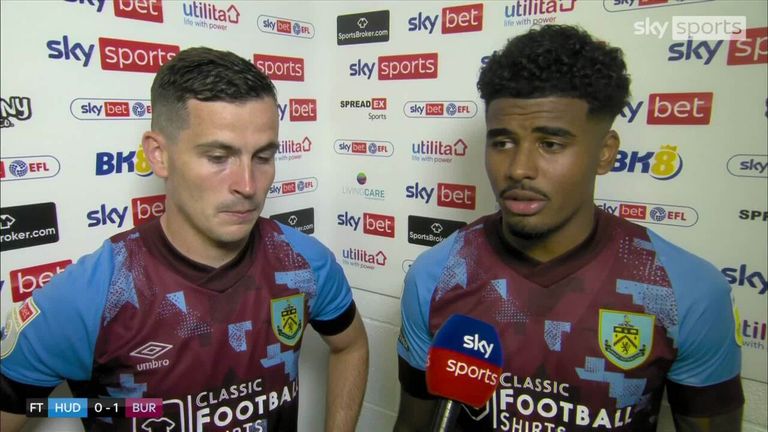 Josh Cullen and Ian Maatsen reflect on a brilliant night for Burnley as they showed a dominant display in their 1-0 win over Huddersfield.

“If you were wondering why Vincent Kompany brought Josh Cullen to Burnley from Anderlecht, it’s for performances like this, with the control he has brought to this game. He has been aggressive on the ball and off it. An outstanding debut.”

What the managers said… Danny Schofield praises his players for fighting back, despite losing the game 1-0 to opposition Burnley.

Huddersfield’s Danny Schofield: “In the first half, they were the much better team. They dominated the middle of the pitch and the wingers coming inside caused us problems – they outnumbered us in that area and that’s something that we got wrong. But in the second half, we changed a few things, performed much better and we gave it a go.

“[After the game] I said, we win together and lose together and suffer together. We keep growing, keep trying to perform and trying to improve. As long as we stick together, that group of players show a lot of fight, a lot of energy all the time. They are true professionals and if they keep showing that fight and that spirit on the pitch, we’ll be ok.

“We hope for it to gel really quickly. We’ve had a really short pre-season and tried to get things into the players really quickly. New recruits always take a bit of time, but we’ll try and speed that process up to make it as smooth as possible.” 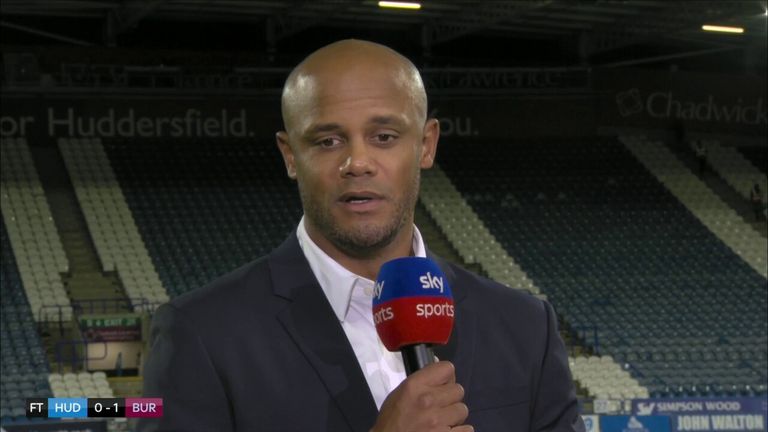 Vincent Kompany praises his Burnley side as they won 1-0 against Huddersfield in their first game of the Championship season.

Burnley’s Vincent Kompany: “I couldn’t have asked for more. What I put forward was the intensity of the team and just how the lads really dug deep for each other – that’s the hardest part, especially with a lot of new players. We created a lot of chances that could have been a little bit more clinical, in my opinion, and it’s Burnley, so we work hard, we’re aggressive and we try and surround people in numbers – and I think that’s what we did.

“The second half was a real test of probably what’s coming in the league. If you get around the ball in numbers, I always think that outweighs the size, but you’ve got to get around that and it’s a lot of work. We have a midfield with legs and wingers with legs. We might not, at this moment in time, have the size of other teams, which is a bit weird to say when you are the manager of Burnley, but we’ve got legs, heart and the lads were brave and got stuck in.

“I keep saying, on any given day, give me hard work and attitude and I’ll take that above talent and that’s what Burnley is. We’re not there, don’t get me wrong, but it’s one step in the right direction, showing what we could do.”

Huddersfield travel to St Andrew’s to face Birmingham at 7.45pm on Friday August 5, in a match live on Sky Sports Football, while Burnley return the following day, when they host Luton at 3pm at Turf Moor.