Heath Ball worked 98 hours in his north London pub last week. Some days he started at 7am and finished after midnight. And that was before he attended to his two other pubs in east London and Sussex.

Over the three sites, Ball needs 11 more staff but none of the applicants have wanted to work long evening shifts or weekends.

Paying them is another matter. Ball offers above the minimum wage and staff receive 100 per cent of tips — but that is becoming harder to fund as his energy bill has more than doubled, the price of meat is up 20 per cent, butter by 34 per cent and Greene King, from whom he rents the Red Lion & Sun and buys his beer, has increased prices 4.7 per cent to cover its own rapidly rising costs.

“I actually think we are worse off than we were in Covid,” Ball said. “We still have the hangover and the costs and everything is so expensive now.”

Ball’s experience is shared by publicans up and down the UK as they battle rising costs, a lack of ready workers and unsteady customer demand. Greene King, the 223-year-old pub company and brewer, epitomises the particularly volatile challenges building up for the hospitality industry just as it was hoping for a triumphant recovery from the coronavirus pandemic.

Greene King owns around 1,000 tenanted pubs that are “tied” to the company’s beers. The group has another 1,600 pubs managed by company employees, making it one of the UK’s largest pub groups. It employs 39,000 people, including at its two breweries and three distribution centres that send off its beers to bars and supermarkets in 44 countries around the world.

Overall it is a business that is acutely exposed to inflation, which economists forecast could reach double digits this year.

From electricity to ingredients, costs are soaring

The company’s main Bury St Edmunds brewery has stood on the same site since the Greene and King breweries, which benefited from the Suffolk town’s well water, merged in 1887.

It uses 26mn kilowatt hours in energy a year — around 1,770 times the average annual UK household consumption — as it runs malt through “mash tuns” and milling machines, some of which have been on site for more than 80 years. Malt comes from just over a mile down the road but energy price increases drove its supplier to add a surcharge this year “with very little notice”, said Matt Starbuck, managing director of Greene King’s brewing division.

“It’s easy to look at brewing and go, ‘you add some hops to some water and some malt’ but we’ve got logistics businesses, we’ve got engineering companies, we’ve got farmers, so the broader network of cost dependency is quite significant,” Starbuck added.

The cost of glass bottles is also up, while fuelling “dray” trucks that transport barrels is more expensive. The combined pressures mean the overall cost of running the brewing division is 8 per cent to 10 per cent higher than last year, even though Greene King is only brewing around 80 per cent of its pre-Covid volumes.

Inside the pubs, costs are also rising. The price of ingredients to make traditional dishes — white fish and batter for fish and chips, meat for burgers and pies — has skyrocketed. Chicken prices are up around 25 per cent, while hikes in sunflower oil prices resulting from the war in Ukraine have increased the cost of chips by a fifth.

At the Red Lion in Highgate, Ball said standard 20 litre bottles of sunflower oil, which cost £19.90 at the beginning of the year, were billed at £58.68 a bottle last week. The pub uses around 150 litres every week.

Wages are another problem. Industry-wide labour shortages have forced Greene King to increase pay for many of its workers, particularly pub staff, by high single digits and its vacancy rate is running above its historic average of 4 per cent to 5 per cent, it said.

Greene King’s chief executive Nick Mackenzie said the group had been lucky to have the backing of one of Hong Kong’s largest property developers, CK Asset Holdings, which bought it for £4.6bn in 2019.

But regardless of deep-pocketed investors, cost mitigation is “no doubt” a day-to-day challenge. “The cost environment is changing daily. It is a significant issue to every business and I think will be with us for a little while,” added Mackenzie, who joined Greene King just under a year before the pandemic hit.

Keeping a lid on the price of a pint

It was a tough period even before inflation took off: revenues in the year to January 2 improved 42 per cent to £1.3bn, compared with 2020, but that was still 40 per cent lower than pre-pandemic levels. Greene King reported an operating profit of £63.8mn, up from a £149.3mn loss in 2020.

Trading has improved in the past quarter, the company said, with highest demand in the north east and London pubs still lagging.

Starbuck said the company was in “active negotiations” with all suppliers to find ways to cut costs, with minutiae such as switching from half-load deliveries once a week to full deliveries once every three weeks being considered.

In pubs, menus have been carefully trimmed and bar operations rethought to improve the efficiency of service. Staff have been put on more flexible rotas and changes have been made to speed up decision making when products are unavailable or become too expensive.

Ultimately, however, prices have to go up, Mackenzie warned.

A drive to get back to socialising since Covid restrictions lifted has prompted customers to spend more, so far allowing pub companies to increase prices.

Greene King has raised the price of its pints by an average of 5p and food by 6 per cent or 7 per cent but, like pay, the company varies its policy by region and brand.

Increase prices too far, and there is a risk customers stop coming. “You have to make business decisions based on affordability but you have to balance that with the experiences you are giving,” Mackenzie said.

There are also logistical considerations: menus need to be changed, tills reprogrammed.

Steve Bryan, who runs one of Greene King’s managed pubs in Bury, looked around his half-full beer garden on Thursday lunchtime last week and said his staff had taken to thanking customers as they leave because “it’s an expense now to come to the pub. It’s almost an extravagance for some people.”

The number of customers buying drinks is up but food orders are down compared with 2019, he said, and postulates whether it is because customers are eating out less.

To boost custom, Greene King’s pubs are putting on more events and trying to encourage business at all times of day — even breakfast. Bryan is thinking up more inventive ways to engage customers, from selling old branded beer glasses for charity to sausage eating contests.

The company also faces the more unique challenge of rethinking its beers. A longtime traditional ale brewer, the move from consumers towards premium lagers and craft beers has pushed it to launch some lighter keg beers this month.

“Overall [traditional ale] is in long-term decline and we have to acknowledge that,” Starbuck said. 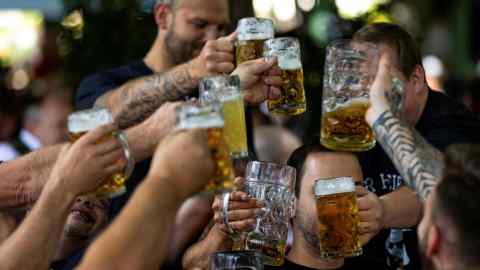 Cold lagers will be popular during summer months when pubs do well from punters gathering in their gardens but Mackenzie acknowledge the company has “to keep a close eye on . . . discretionary spend over the next six to nine months”.

Ball fears a hard winter ahead: “Everyone is happy in summer but what is winter going to look like? What are the costs of everything going to be then? Are people just going to stay home knuckle down over winter and try to conserve money? The scary thing is you don’t know what is going to happen next.”