Boris Johnson’s former ethics adviser has clarified that he resigned this week because of “deliberate breaches” of international law by the UK government, rather than just over the narrow issue of steel tariffs — as the prime minister had suggested.

“Emphasis on the steel tariffs question is a distraction,” Lord Christopher Geidt wrote in a letter to MPs. It was “simply one example of what might yet constitute deliberate breaches by the UK of its obligations under international law.”

He also pointed to the “government’s widely publicised openness” to such legal violations.

Geidt had previously given an opaque explanation for his resignation when he wrote to Johnson on Wednesday.

In the resignation letter he indicated that his patience had been worn thin by the “partygate” scandal in Downing Street and then made a vague reference to having been asked to approve “a deliberate and purposeful breach of the ministerial code”.

Johnson wrote in reply that his adviser had resigned after being asked for advice on an attempt to protect a crucial industry — understood to be steel — where the government intended to impose tariffs on imports. The prime minister said that would potentially conflict with the UK’s obligations under the rules of the World Trade Organization.

But in Geidt’s new letter to MPs on Friday he said he had not wanted to give Johnson advance cover when the prime minister was planning to breach international law. He did not offer other examples, but the UK has been accused of breaking international law in various instances in recent months, notably over its plans to rip up parts of its 2020 Brexit agreement with the EU. 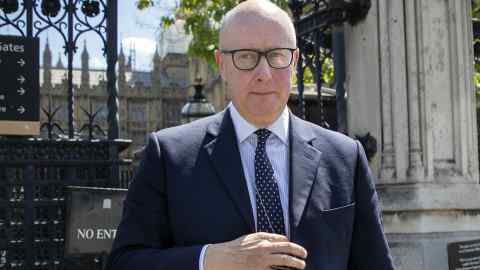 Johnson’s team argues that Geidt quit because he had come to the end of his tether after media criticism and a grilling by MPs at the start of the week.

But Wendy Chamberlain, chief whip for the Liberal Democrats, said: “This letter confirms what we already knew. Lord Geidt quit because he was sick of being asked to cover up for Boris Johnson’s lawbreaking.”