Frogun is the latest indie platformer to harken back to the games of the ‘90s, and while some cynics might feel like we have enough games in that mould, I’d argue that its an aesthetic that can be tapped into for infinite possibilities, and as a unique isometric 3D platforming game, Frogun does something new while paying tribute to the past.

The central concept behind Frogun is that you play as a young girl named Renata who heads out to find her two explorer parents, who have gone missing. In order to stay safe out there, she brings along the titular Frogun, a frog gun that sticks out its long tongue as a grappling hook. It’s a novel concept and gives the game a distinct identity of its own.

The Frogun itself comes in handy in a number of different situations – for example, you can fire it at enemies, so that they are caught by the tongue, and can then be fired at other enemies. Or you can use it to latch on to objects or larger enemies, so you can get over chasms, or (in the trickier parts of the game) shoot at different floating objects in rapid succession to cross vast bottomless pits.

I’ll admit that for some of the more advanced manoeuvres, it takes a little while to get used to, but once you begin to master them, you’ll start to think about creative ways to solve the problems you’re faced with. With a bit of outside-the-box thinking, using the Frogun strategically can allow you to find short-cuts and skip portions of the levels. You are rewarded for completing levels quickly, so it definitely encourages this kind of play style.

In-game Frogun aside, another aspect of this game is the 3D platforming. You’ll be jumping across literal platforms over bottomless pits, having to time your jumps just right, and bouncing off enemy heads to get some extra height. I felt that this aspect of the game was very reminiscent of the original Crash Bandicoot games – it can be a little challenging, but the controls are so tight that it always feels totally fair. 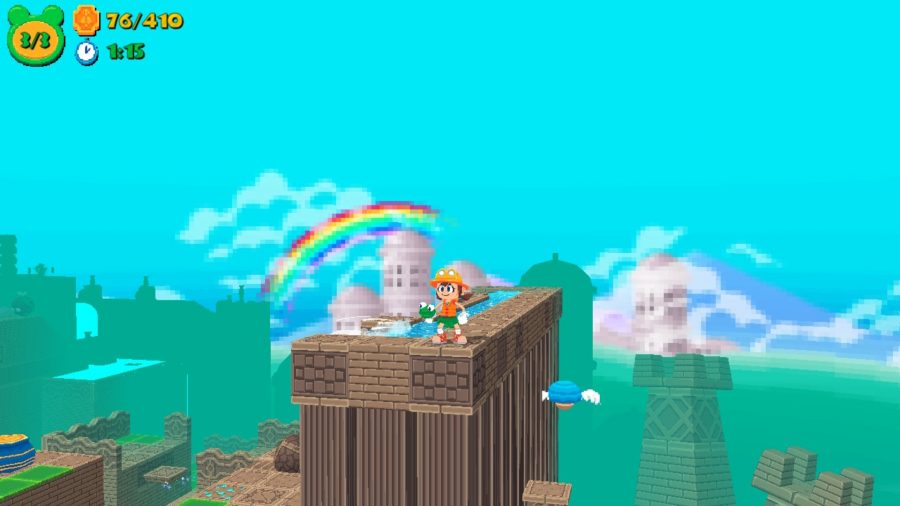 Occasionally Renata encounters her rival, Jake, and in these levels, the gameplay changes a bit because you have to race him to the end. This offers a fun change of pace, though somewhat annoyingly, every time you start the race, you have to sit through dialogue between the two of them. This would be fine if it just happened the first time, but if you lose and have to start again, you also have to watch the dialogue again, which starts to get a bit grating, especially in the latest levels where you’re more likely to lose.

This same problem exists with boss battles, in that Renata has a conversation with them before the battle begins. No doubt you’ll be rapidly pressing A to get it over with on your second attempt, but you’ll be punished for this because you’ll end up pressing A the moment the boss starts, which will fire the Frogun and pull you towards the boss, causing you to take damage. I’m sure this will get patched out, but it’s kind of annoying for now.

That aside, the boss battles are all pretty good. The first couple will probably feel a little too easy for most players, but the later ones are definitely more challenging. You’ll most likely have to do them two or three times so that you can get used to their attacks, learn how to dodge them, and how to fight back.

I mentioned earlier that the story features Renata heading out to find her lost parents, and though you might expect only the most basic of storylines for this type of game, there’s a surprising amount of lore packed in. In every level, you can find lost notes, either written by your parents, the game’s bosses, or other characters, and these often give insights into the game’s world and its history. It’s an effective bit of world-building. 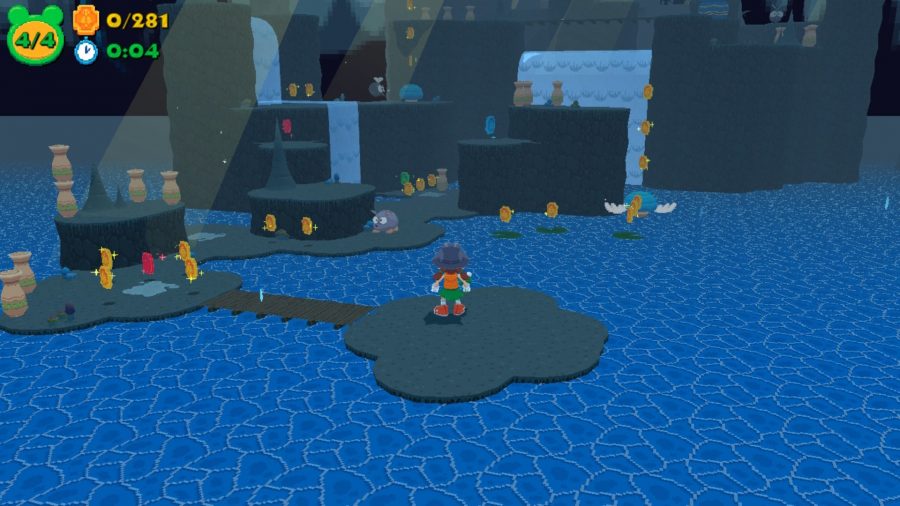 These notes aren’t the only thing for you to collect around the world either: every level has a certain amount of coins (used to buy hats, and other goodies) to find, as well as Eyemeralds, and a skull that you get for completing extra hard side-challenges hidden in every level. The more collectables you find, the more health upgrades you can unlock, allowing you to take more hits. The story isn’t hugely long, but all this will keep you coming back.

All in all, it’s a really fantastic game, and last, but not least, I should mention the presentation. The graphics have a vaguely PS1-style aesthetic (though they look better than anything the console could have actually run) and all the music and sound effects offer a suitably retro feel too. It’s really charming, which makes for a delicious cherry on top of a well-made gameplay pie.

Check out our guides on the best indie games on Switch and the best Switch platformers for more games like Frogun.