European importers of Russian natural gas have until at least the second half of April to comply with Moscow’s demand that they pay in roubles, the Kremlin said, as buyers struggle to understand their obligations.

“Payment for the actual deliveries that are going on now does not need to be made today,” said Dmitry Peskov, the Kremlin’s spokesman, on Friday, the day after Russia published a decree on rouble payments.

“It should be made somewhere . . . in the second half of the month of April, or even at the beginning of May.”

His comments eased fears that Russia could immediately shut off supplies to any buyer that did not offer roubles. But the longer-term threat remains of Moscow halting deliveries and starving parts of Europe of energy.

Multiple European buyers have so far refused to pay in roubles, saying that Russia’s demand breaches the terms of their purchase contracts, which are mostly denominated in euros or US dollars.

Russia proposed a mechanism that would require gas buyers to open bank accounts both in foreign currency and roubles at Gazprombank, which is not subject to EU sanctions, in order to buy roubles to use for payment. It said doing so would not violate contracts or change volume or pricing terms.

Russia’s president Vladimir Putin signed the rouble decree on Thursday. It applies to “unfriendly” countries that have imposed sanctions on Russia over the invasion of Ukraine, including EU members.

If payments were not made, he said, “we will consider this a default on the part of the buyers — with all the ensuing consequences”.

The threat of supply disruptions has triggered alarm among European countries that rely heavily on Russian gas, with Germany and Austria this week beginning to prepare for energy rationing.

Olaf Scholz, Germany’s chancellor, said on Thursday he had told Putin that his country had checked its gas contracts with Russia and would keep paying for them in euros and sometimes dollars.

Putin described the proposed payments mechanism as “a clear and transparent scheme” for foreign customers. 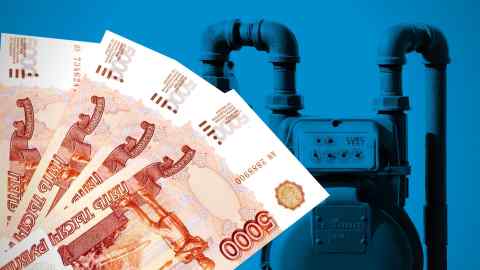 But Laurent Ruseckas, an energy analyst at S&P Global, said one concern for European gas buyers was that the Russian central bank — which is under sanctions, unlike Gazprombank — would likely be the de facto counterparty for rouble exchanges.

“The objections are more likely to come from the political level,” he said, but added: “There’s potential for a compliance issue for companies.”

Gazprom, the country’s gas giant that supplies more than a third of Europe’s gas needs, said on Friday it had started sending out formal notifications to its clients about the new payment process.

“Gazprom, as a Russian company, unconditionally and fully complies with the requirements of Russian legislation,” it said in a statement. “Notifications about the new procedure for settlements in Russian roubles are officially sent today to counterparties.” It added that it continued to “reliably export” gas.

OMV, an Austrian buyer of Russian gas, confirmed that state-owned Gazprom had been in touch for the first time about the change in payment to roubles but said it was awaiting written information from its contractual partner.

Slovakia’s SPP, another big buyer of Russian gas, said: “None of our suppliers has contacted us in this matter. SPP will act fully in line with terms and conditions of the respective contracts. The current currency for gas supplies is the euro.”