Manchester City striker Erling Haaland says he is not concerned about settling in the Premier League following his summer move from Borussia Dortmund.

The Norwegian striker made his debut for Pep Guardiola’s side in Sunday’s Community Shield match against Liverpool at the King Power Stadium and endured a frustrating evening, missing a golden chance from six yards in an eventual 3-1 defeat.

As the reigning champions’ marquee signing ahead of the 2022/23 campaign, the 22-year-old carries a weight of expectation, yet he is relaxed about the possibility it may take time to adapt to a new league.

“We will see about settling in,” he said in an exclusive interview with Sky Sports’ Geoff Shreeves.

“People can take time, people can come directly into it. We have to see, but I’m not concerned. That’s life as a footballer – you have to live with it.

“You are a kind of entertainer. You get judged every single week for what you do on the pitch and you have to deliver and do your best.

“For me as a striker, this is something I cannot stress about because if you think too much, you might end up doing things you don’t want to do.

“It’s all about trying to enjoy, live in the moment. People talk about what you did a year ago, but it’s the next game that counts.”

Haaland scored an astonishing 86 goals in just 89 matches in all competitions for Dortmund before his arrival in England, making himself a prime target for the European elite in the process.

He has only just turned 22, however, and admits that he has joined City in order to further his development.

“(I can improve) everything. If you think I’m good at one thing, I can always get better,” he said. Manchester City’s Phil Foden says that their recent signing Erling Haaland is a great addition to the team, hailing him as ‘unstoppable’.

“Part of the game is to get out of your comfort zone which is something I’ve been doing and something I like because then you develop more as a human being as well.

“The chemistry on the pitch with the other players is something that will come – I don’t know if it will take weeks, months, but this is something we have to build on every single day in training. At this high level, you also understand the people around you – he is good at this, he is good at that, he loves to play the ball there.

“I’m a player that’s hungry for goals, that gives 100 per cent, that wants to win every single game. They are simple things but also really important things.” 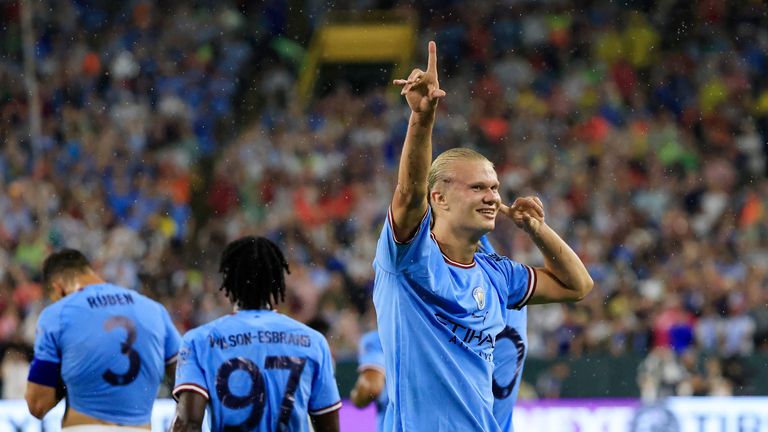 New Manchester City signing Erling Haaland scored an early goal on his debut for the club in a pre-season friendly against Bayern Munich.

Guardiola is likely to hand Haaland his league debut when West Ham welcome City to the London Stadium on the opening Super Sunday of the Premier League season.

With a boyish smile, Haaland can barely contain his excitement for the occasion.

“I’m looking forward to feeling the atmosphere and the rivalry of us against them, fans against each other. I’ve been to a lot of games in England and this is something I’ve always liked a lot.

“Also the feel of the game, the tempo. It’s going to be tough and this is the charming thing about the Premier League. It’s a beautiful, hard competition that’s why it’s the most popular league in the world.”