Five years ago Emmanuel Macron, then aged 39, stormed his way to the French presidency after an energetic campaign in which his supporters knocked on doors across the country asking voters what they wanted. His book published for the campaign was called simply Revolution.

Now, as he seeks a second term in next month’s presidential election, his campaign team worries that Macron spends too much time on the war in Ukraine and has become a distant establishment figure who is failing to engage with voters. They warn Macron needs to inject more fervour into his campaign at home if he is to ensure the victory predicted by opinion polls.

“There’s none of the Macron novelty there was before,” said Pascal Perrineau, a political scientist. “Now he belongs to the old world.”

“She is dangerous for the president, and she can win this election,” he said in an interview on France 5 television last week.

Macron still looks on track to win next month’s vote. He has the advantage of incumbency: he is prominent on the world stage and has been considered an effective leader during Russia’s invasion of Ukraine.

But the boost to his popularity from his role as a wartime president has already started to wane. To grumbling French voters, Macron sometimes seems to be a typical politician from the Paris elite who deserves to be taken down a peg or two.

Macron has taken the criticism to heart. On Monday, he rolled up his shirtsleeves to meet voters on the streets of Dijon in Burgundy. Listening to complaints about the rising cost of living, he harked back to his winning 2017 campaign formula as a candidate who was “neither right nor left” and would transform France.

“When you walk, you need two legs, the right and the left, and you have to step with first one and then the other,” he said in Dijon, defending his record on economic reform, cutting unemployment and supporting the economy during the Covid-19 pandemic. “We’ve done some reforms that people on the right had never wanted or been able or known how to do. And they have allowed us to finance social policies that the people on the left had never done.”

Conscious that he will need leftwing voters in any run-off against the far-right Le Pen, he made sure he was accompanied by two former Socialists, François Rebsamen, Dijon’s mayor, and François Patriat, who heads the pro-Macron group in the Senate. 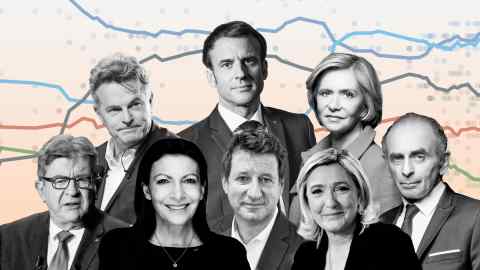 The latest polls give Le Pen, the president’s closest challenger, about 20 per cent of voting intentions for the first round of the election on April 10, well below Macron’s 28 per cent. But on current forecasts that figure would be enough for her to repeat her 2017 performance and qualify for the second-round run-off on April 24 — and in that final vote Macron is predicted to have only a 54-46 per cent advantage.

In an Elabe poll published on Wednesday night, Macron’s winning margin in the second round narrowed to just five percentage points: 52.5-47.5.

Parts of Macron’s manifesto — which includes reforming the French pension system and raising the retirement age from 62 to 65, as well as giving schools more say over the deployment and pay of teachers — are unpopular with Socialists and trade unions and could lose him valuable support by “destabilising voters from the left”, said Chloé Morin, a political analyst at the Fondation Jean-Jaurès think-tank. “He put a few sensitive issues on the table,” she said.

Macron is also vulnerable to popular resentment over soaring fuel prices as a result of the Ukraine war — it was a green fuel tax that sparked the 2018 gilets jaunes anti-government demonstrations — and to accusations that he is aloof and uncaring and unwilling to delegate government tasks to his ministers.

He is relying on a big rally on Saturday in La Défense just outside Paris to revitalise his campaign. Ministers and Macron supporters have been bombarding social media with video posts on the event to drive home the message that electoral victory is far from secure.

“In life as in politics, nothing is ever certain, nothing is ever won in advance . . . It’s essential that we mobilise,” said Olivia Grégoire, junior finance minister for social economy and solidarity, in her appeal. “As you know, lots of candidates are painting our country black for opportunistic reasons.” This presidential election, in the midst of a pandemic and a war in Europe, could be marked by a high abstention rate that might affect the reliability of the opinion polls, and commentators say Macron’s campaign team is right to be cautious.

“For the moment the most probable outcome is the re-election of Macron,” said Bruno Cautrès of Sciences Po, “but that doesn’t mean it’s completely certain or that he can go to the election with his hands in his pockets. It’s very competitive all the same.”