Tech billionaires have used their wealth before to make a mark in the news business. They include Amazon’s Jeff Bezos, owner of the Washington Post, and Salesforce’s Marc Benioff, who, with his wife, acquired Time in 2018.

Nobody, however, does it quite like Elon Musk. The Tesla and SpaceX chief executive, long one of the loudest voices on Twitter, this week emerged as the social media site’s largest shareholder and newest board member, vaulting him into an influential position at one of the world’s most widely-viewed news sources.

Though Twitter is more of a tech platform than a single editorial product, Musk’s unique position is likely to leave him with some of the influence associated with traditional “press barons — whether that is in ink or bits”, said Jeff Jarvis, an associate journalism professor at City University of New York.

Musk’s intervention in the new media comes with an extra twist. With 80.6mn followers, he has become an important part of the mechanism that drives engagement on Twitter, key to how Wall Street views the company. In return, he has used his position as the site’s foremost business rock star to pursue personal vendettas, promote his companies and tech ideas, and — as his business interests have spread — pursue an increasingly political agenda.

For Twitter and Musk, that has created a tight alignment of interest around engagement. According to financial analysts and social media experts who have followed the company, it is an open question whether that will be healthy in the long run for the quality of discourse, or for the wealth of shareholders. “Honestly, it could go either way,” said Youssef Squali, an analyst at Truist Securities, voicing a common caution.

The 30 per cent bounce in Twitter’s share price since news of Musk’s 9.2 per cent investment was disclosed on Monday pointed to a knee-jerk hope that his arrival will provide a breakthrough in some of the perennial problems that have held back the social media site. These include its slow pace of product development and inability to tap a far bigger global audience.

Musk’s technology skills and strong “feel” for products — along with the sheer dynamism that has been a characteristic of his own companies — could make him a catalyst for change, said Brent Thill, an analyst at Jefferies.

In one sign that Musk may already be having an impact, Twitter disclosed late on Tuesday that it would soon start testing an “edit” button to let users change their tweets — something Musk has argued for, though the company said the idea had been in development for a while.

According to former Twitter staffers, years of heated internal debate have failed to resolve the question, which has been deeply divisive for both technical and ethical reasons. Musk “walked right into the middle of the office, figuratively speaking, and said ‘here’s the thing that’s going to piss you guys off the most,’” one former staffer said.

Musk’s pushy presence is likely to present an extra challenge for Parag Agrawal, Twitter’s recently appointed chief. He is already working under the close scrutiny of an activist investor in the shape of Elliott Management. Another powerful investor, Silver Lake’s Egon Durban, joined the board after it invested $1bn two years ago.

Personal connections could help to smooth the way. Musk worked closely with Silver Lake’s Durban when trying to arrange a buyout of Tesla, and was a director of Endeavour, another Durban-backed venture, until three weeks ago. He quit the board of that company to free himself for other, unspecified commitments — a sign that his discussions about signing on as a Twitter director may have been in train.

Yet Musk has always made a virtue of being a highly disruptive presence at any company he is involved in. And he comes with a set of strongly held, technocratic views that has brought him many critics. In the words of one Twitter rank-and-file employee, expressing the kind of strong reaction the billionaire provokes: “He’s a lunatic. We don’t want him here.”

The Tesla and SpaceX CEO has a long list of Twitter-centred controversies to his name. “He’s used [Twitter] in ways that have got him into trouble with the government, he’s used it to target journalists,” Jarvis said.

Among the results of Musk’s most ill-considered tweets: a settlement with the regulators that led to him giving up the chair of Tesla, and a high-profile defamation case over whether he had accused someone of paedophilia (Musk won a jury verdict in the case).

He has also used the service to push a political agenda. That has included singling out regulators and governments for criticism, most notably the US Securities and Exchange Commission. When California insisted Tesla shut a car plant because of Covid-19, Musk turned to Twitter to denounce the move as “fascist” — but then stayed notably silent when the carmaker’s plant in Shanghai was closed in similar circumstances late last month.

Traditional news organisations have long had clear rules about how to maintain editorial independence, said Anupam Chander, a professor in global internet regulation at Georgetown University. By contrast, there is no way of knowing if “Elon Musk or any other billionaire is unfairly trying to exercise control over the great speech platforms of the day”. 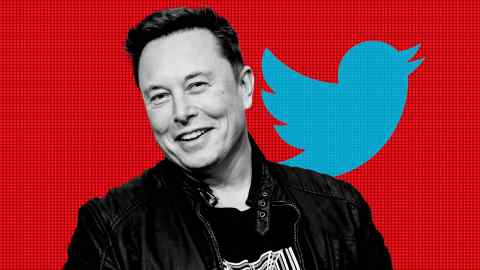 Musk has pressed Twitter to relax its content moderation policies and abandon restrictions on what people can say on its service, in the interests of returning it to a “free speech” ethos that held sway in its early days. That could put him on a collision course with the company’s CEO, who has said the central issue for the social media group lies in how to create “a healthier public conversation” that will determine “who can be heard”, rather than focusing on free speech.

Musk’s position as board member, largest shareholder and loudest voice on Twitter could help to nudge the company toward relaxing its content policies, many observers claim.

According to Chander, that might include reversing Twitter’s lifetime ban on Donald Trump — something that has become “certainly a possibility” as “the libertarian ethos that is ever pervasive on the internet” gains an advocate in the Twitter boardroom.

Such changes in policy might create the kind of controversy that drives up engagement in the short-term, at the risk of reversing headway made in tackling harassment and misinformation and ultimately hurting the service, Jarvis said.

Foisting a more “absolutist” approach to free speech on the company could also be bad for its bottom line, according to analysts such as Brian Wieser, global president of business intelligence at advertising group GroupM. “Large advertisers don’t like toxic environments.”