Deutsche Bank quietly relocated hundreds of high-skilled software developers and their families from Russia to Berlin over the past three months as Germany’s largest lender scrambled to limit the fallout of the Ukraine war on its IT capabilities.

Prior to Russia’s invasion of its western neighbour in late February, Deutsche employed some 1,500 IT specialists in two key software technology centres in Moscow and St Petersburg.

The staffers, which accounted for a quarter of Deutsche’s investment bank’s in-house computer specialists, were mainly in charge of developing and maintaining software for the global trading business and corporate banking system.

After Russia invaded Ukraine in late February and the west imposed crippling sanctions, Deutsche offered all of its staff in Russia the choice of moving their jobs to Germany.

About half of the employees accepted the offer and the majority have already made the move, three people with direct knowledge told the Financial Times.

“This was not an evacuation,” said one person involved, adding that it was “a normal relocation of staff, but obviously on a size and scale that is much greater than we would normally deal with”.

Deutsche opened its technology centre in Russia two decades ago and has been relying heavily on the country’s IT skills ever since. The bulk of its trading software runs on hardware that is based in Germany and other EU countries, and according to Deutsche no data was stored in Russia. But losing the expertise of staff in Moscow and St Petersburg could have immediate and severe consequences as key technology upgrade programmes would be delayed.

So far, Deutsche has not said what it will do with its remaining IT operations in Russia. “We continue to look at our options there,” said one senior manager. The bank in March said it was going to wind down its banking activities in the country, which compared to other European lenders were already rather limited.

Since March, a Deutsche Bank project team of some 50 people from various functions including human resources, legal and the IT department has been working on relocating the Russian-based staff as well as their spouses and children. In total, some 2,000 people are moving to Germany.

Deutsche was careful to work within existing Russian laws, fearing potential retaliation by Russian authorities towards its remaining staff in the country. All employees who have moved to Germany formally immigrated. “They did not pretend [to Russian authorities] to go on holiday,” said a person involved, adding that Deutsche Bank is adhering “to all Russian local laws” to avoid putting anyone at risk.

“We went to great pains to make sure everyone understood that [moving to Germany] was optional” and nobody was “blackmailed” into leaving against their will, the person added. 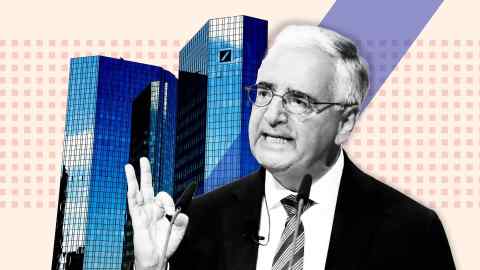 As Russia’s borders remained open, the actual moves were “a relatively smooth process”, said one person. Many employees flew to Germany via Finland and Helsinki. As Deutsche had sorted out all the paperwork beforehand, the employees could start their work in Berlin immediately after arriving in the German capital.

Preparing all of the paperwork was a complex process, as employees needed birth certificates, university diplomas and other documents, often in a translated form, to obtain visas and work permits in Germany. “There were quite a lot people who haven’t renewed their passports because no one’s travelled for three years,” said one, adding that pets that staff wanted to take with them to Germany added another layer of complexity.

“We certainly learnt more about our colleagues’ pets than we ever wanted to know. It starts from hamsters and it stops at snakes. And no, you can’t take a snake on the plane,” said one.

The bank was concerned that Russia’s secret service may try to plant spies at its German operation. “We have been operating under heightened cyber security awareness [in Russia] for some time, including exactly that threat,” said a senior manager, adding that the bank did background checks of its employees and scanned all the code written in Russia.

“But a lot of the people [who moved to Germany] have been with us for up to 20 years,” the person stressed. “We know them personally very well, and for many years.”