The events that transpire in Lordran all revolve around one man, Dark Souls Gwyn. The Lord of Sunlight led the assault against the Ancient Dragons, ushering in the Age of Fire, which is nearing the end of its cycle when you, the Chosen Undead, rise once more. There’s some fascinating lore surrounding this key character, but there’s an awful lot of it.

However, that’s why we have this Dark Souls Gwyn guide – here, we tell you all about the head honcho of the gods, what his story is, who exactly Gwyn is, and how to defeat him at the end of the game. Naturally, a character as important as this has a lot of lore, so bear with us as we bring you the most important information that you need to know.

A quick family lesson informs you that in Dark Souls, Gwyn has three children, two of which are Dark Souls Gwyndolin and Dark Souls Gwynevere, so make sure you check out our guides to discover some extra details. We also have a Dark Souls Solaire guide, who, for the longest time, was believed to be the Lord of Sunlight’s firstborn son, but certain events in Dark Souls 3 put a stop to this rumour.

Anyway, without further ado, here’s everything you need to know about Dark Souls Gwyn. 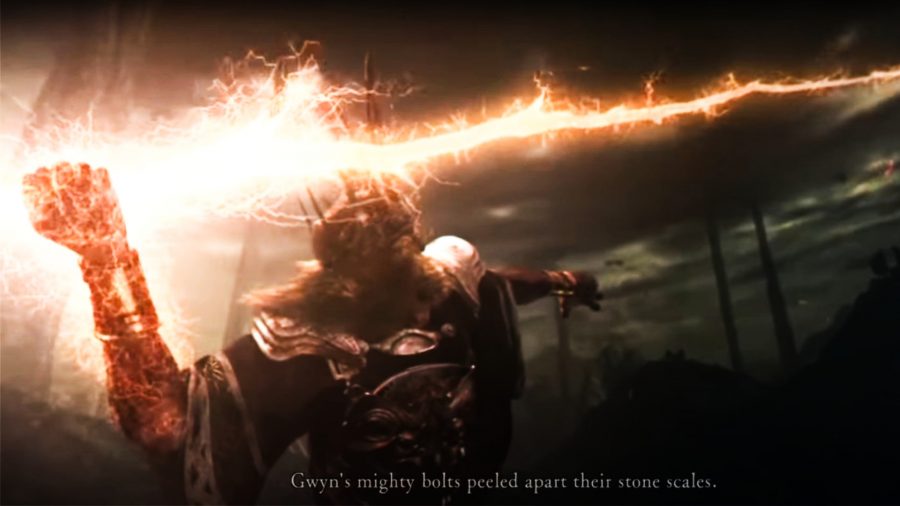 Who is Dark Souls Gwyn?

There’s a considerable amount of information to unpack here, so we’re going to split this into several subsections, including the battle with the Ancient Dragons, Gwyn’s family, the Age of Fire, and finally, how he became the first Lord of Cinder.

Battle with the Ancient Dragons

Long ago, before the events of the game, a great war between Gwyn, his fellow lords – the Witch of Izalith, Seath, and Nito – and the Ancient Dragons took place. For a while, it looked as though defeat was imminent for the mighty Lord of Sunlight. No doubt his impending loss was all the more painful after his firstborn son changed his allegiances from his father and his army, to that of the Ancient Dragons.

However, a treacherous dragon known as Seath the Scaleless was all too happy to sell out his own kind. Perhaps it was out of jealousy of the fact he doesn’t have the scales of his brethren. Nonetheless, the dragon divulged crucial information to Lord Gwyn – the scales of the Ancient Dragons are particularly weak to lightning. Thus Gwyn and his miracle able soldiers unleashed thunderous lighting bolts.

The Age of Fire

After the defeat of Ancient Dragons, Gwyn, the Witch of Izalith, and Nito came across the lord souls. While the Witch and Nito harnessed theirs for their own means (the soul of life and soul of death, respectively), Gwyn split his, bequeathing part of his soul to the Four Kings, and another portion to Seath for his part in the war.

In essence, the Age of Fire is the age of the gods, as Anor Londo and godhood flourished during this time. While humans are not revered in this world, they certainly serve a purpose, particularly in this age, which is why many covenants, including The Way of White, are so important to Gwyn.

For unknown reasons, he fears humanity, yet, it feeds the flame perfectly. With covenants, he knows that humans are controlled. However, one day, the hollow curse spreads through the lands of Lordran, and this is the final straw that leads to his act of desperation when it comes to the first flame.

First, it was the Abyss taking New Londo (which Gwyn floods with no regard for the citizens of the city), and the events that transpire in Oolacile. Yet, the hollow curse is what truly hit Gwyn. He could send forces to fight the Abyss – he could do nothing against a curse like this. 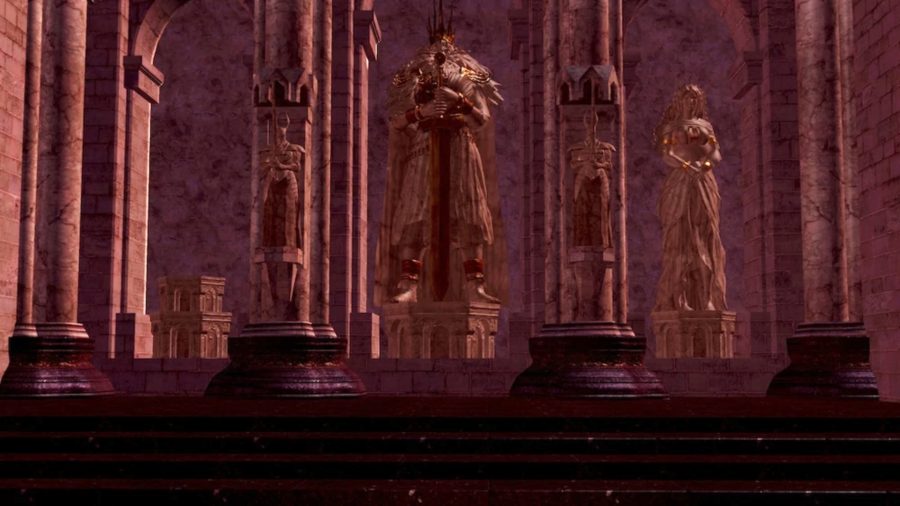 Becoming the first Lord of Cinder

Of course, all good things must come to an end, yet the mighty Lord of Sunlight feared what would happen should the first flame dwindle. He didn’t want his Age of Fire to end, therefore he chose to use himself as kindling to postpone the end of the Age of Fire, and given he did this a thousand years before we set foot in Lordran, it’s fair to say that his sacrifice is somewhat successful.

When Dark Souls reaches its conclusion, it’s this version of Gwyn that you must face in the Kiln of the First Flame – an exceedingly powerful foe, it’s not difficult to see why he’s the king of the gods.

As we previously mentioned, in Dark Souls, Gwyn has three children (technically, he has four, but since Fillianoire isn’t known until DS3, we won’t mention her here). His first child, as we established, lost his right to be a god, and is expunged from the history books, becoming lost to the annals of time. Seriously, Gwyn even has his statue removed from Anor Londo – but at least he had one. Poor Gwyndolin never got a statue carved in his honour.

That leads along nicely to the youngest of Gwyn’s three children. Gwyndolin, unfortunately, is somewhat of an outcast, with his father never showing an ounce of respect for the young deity. Why is this, you might ask? Well, Gwyndolin has an affinity with the moon, which is considered feminine. Therefore, Gwyn chose to raise him as a daughter instead.

The way Gwyn treats Gwyndolin is abysmal, and he certainly doesn’t deserve the love, respect, and adoration of his youngest. Yet, the powerful sorcerer longs for his father’s approval, so much so that he keeps a watchful eye over his father’s tomb in Anor Londo.

As for Gwyn’s one and only daughter, it’s fair to say that she’s the apple of her father’s eye. In fact, the princess is known as the Queen of Sunlight. That alone shows what Gwyn thought of his child – she had such a strong affinity with the sun and could work miracles, unlike her younger brother.

Of course, if you want to learn a greater amount of information about Gwyndolin and Gwynovere, check out our aforementioned guides.

Where can I find Dark Souls Gwyn?

A lot of people know that Gwyn is the final boss of Dark Souls, and so it goes without saying that he’s not difficult to find in the sense of the game and its events all lead you to him at the climax of Dark Souls.

Nonetheless, if you’re new to the game and want to know how much effort you need to put in to meet this legendary being, well, it’s a long and arduous journey – you’re also going to die over, over, and over again. Do you have to beat all of the Dark Souls bosses to reach Gwyn? Of course you don’t. Some are entirely optional.

However, you must defeat the other three lords, Nito, Seath, and the Witch of Izalith, and the Four Kings – the latter of which owns part of Gwyn’s soul, which makes them mandatory – all must be beaten in order to unlock access to the Kiln of the First Flame which is where Gwyn waits. 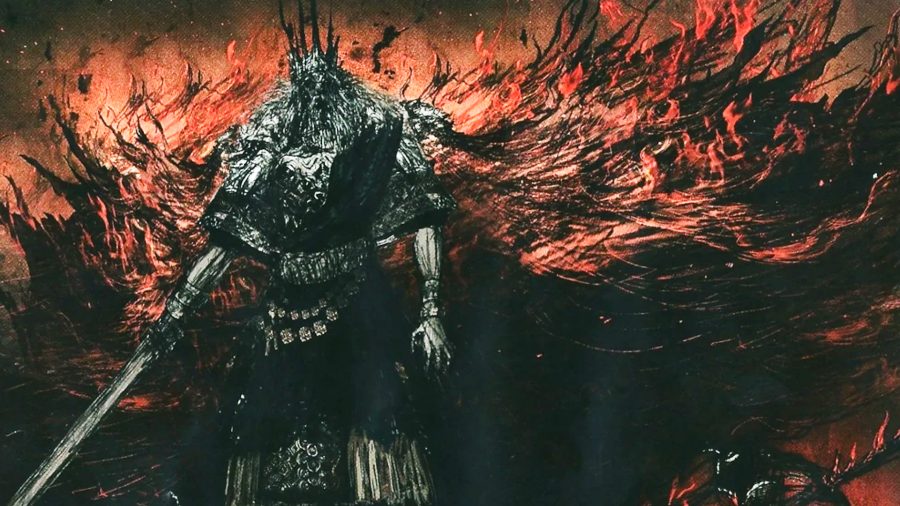 Gwyn, The First Lord of Cinder, is the final boss in Dark Souls, so it’s unsurprising that he poses a bit of a challenge. Well, that’s assuming that you can’t parry – if you’re a master of this mechanic, Gwyn is laughably easy. If you’re not, it becomes a fight between two legendary warriors, and there’s everything to fight for, especially since your victory determines the future of this world.

The arena is quite big, so don’t be afraid to use that to your advantage. You need to have room to breathe and heal. However, be aware that this can cause Gwyn to leap at you – a roll to the left or right should ensure he misses, and then you can charge in for a counterattack.

We must also caution that Gwyn is a hard-hitter, and is capable of sending you back to the grave should he catch you with one of his combos. Never fear, though. There are ways to ensure you survive this assault should you be unlucky enough to be caught in it. Firstly, equip Havel’s ring and wear some heavier armour (or at least something with high fire resistance). Then, if you’re a shield user, you need to equip one with fantastic fire defence and physical resistance – the dragon crest shield is a good choice.

With a shield like this, assuming your stamina bar is high enough, you can block his blows, get a hit in of your own, and then roll away to get some distance to regenerate stamina or heal up. If the Lord of Sunlight is still giving you trouble, you can always call on another player for assistance, or summon Solaire if you finish his questline.

For even more strategies for Gwyn and other tough foes, consult our Dark Souls bosses guide.

There you have it, everything you need to know about Dark Souls Gwyn. If you want to know about some other DS characters, check out our Dark Souls Artorias, Dark Souls Sif, and Dark Souls Priscilla guides. We also have some great suggestions for Soulslike games if you’re after something new to play.