If there’s one thing that Cuphead is known for, it’s the Cuphead bosses. The hand-animated game has a striking style but has become synonymous with its brutal difficulty, all at the hands of the many vicious and deceptively violent colourful cast members. Each boss in the game poses a significant threat, and many sift through different forms, each more terrifying than the last.

If you’re just setting out on this tea-riffic journey, use our Cuphead bosses guide to get a handle on each of the antagonists, and perhaps learn a bit more about them before you smash them to smithereens. While we give tips for beating each boss, we recommend experimenting and finding your own flow with the game, as that’s most of the fun. What works for someone might not work for you, but there are some obvious pointers here and there.

If you’re a huge Cuphead… Head, then why not check out our other great guides and treat the Cuphead fan in your life, even if it’s you. We’ve got guides to Cuphead Funko Pop, Cuphead plush, and why not check out our Cuphead characters guide to learn more about the main mugs who aren’t out to kill you.

Here’s our guide to Cuphead bosses

First up we’re going to shed some light on the Cuphead bosses from Inkwell Isle one. 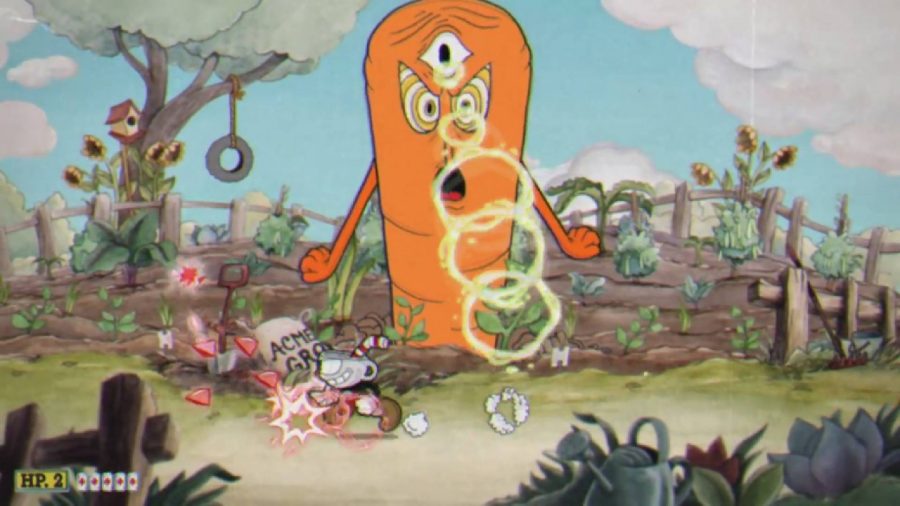 Found in the level Botanic Panic, this trio of tricky vegetables are one of the very first bosses you face in Cuphead! First of all, a giant grubby potato shoots dirt balls at you, so it’s best to jump over them and parry any pink projectiles. Next up is a crying onion, though this one stays stationary, so just avoid the falling tears and wallop them with hits.

Finally is the carrot, which fires homing carrots that track you around the stage. Here the chaser gun is probably the best weapon to take out the missiles, and then avoid the hypnotic rays from the carrot and try to land a special attack to roast these vegetables. They have gone bad after all… 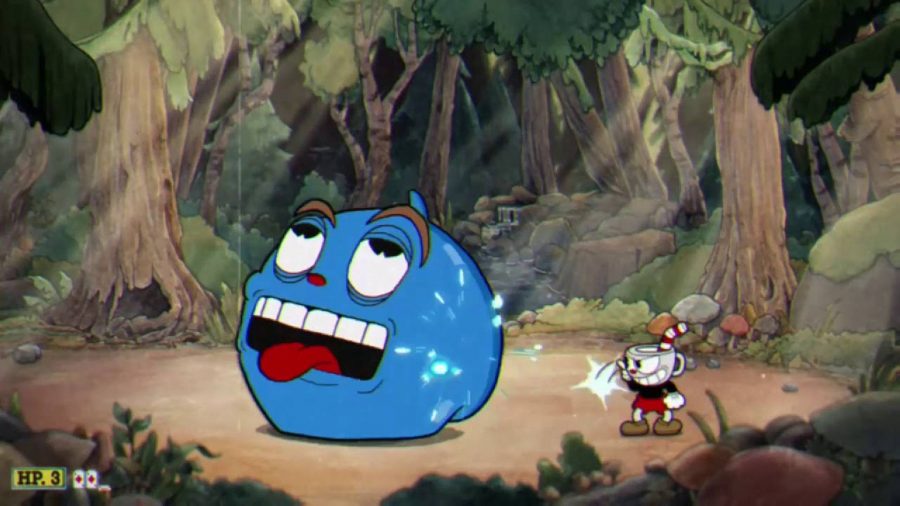 Next up is the level Ruse of an Ooze, which features Goopy Le Grande, the ugliest giant blue slime this side of Dragon Quest. This happy little chappy constantly hops around, so you’re better off using the chaser to ensure you land some hits. Next up, Goopy grows in size and starts unleashing a giant punch attack. Try to dash out the way when you can, and keep moving to avoid getting stomped.

Finally, Goopy takes on the form of a moving tombstone in one of the earlier ‘troll’ moments from Cuphead. Watch out for when Goopy pulls back to unleash a slam attack and try to swap to a more powerful gun for extra damage while it slams to get in some extra hits. 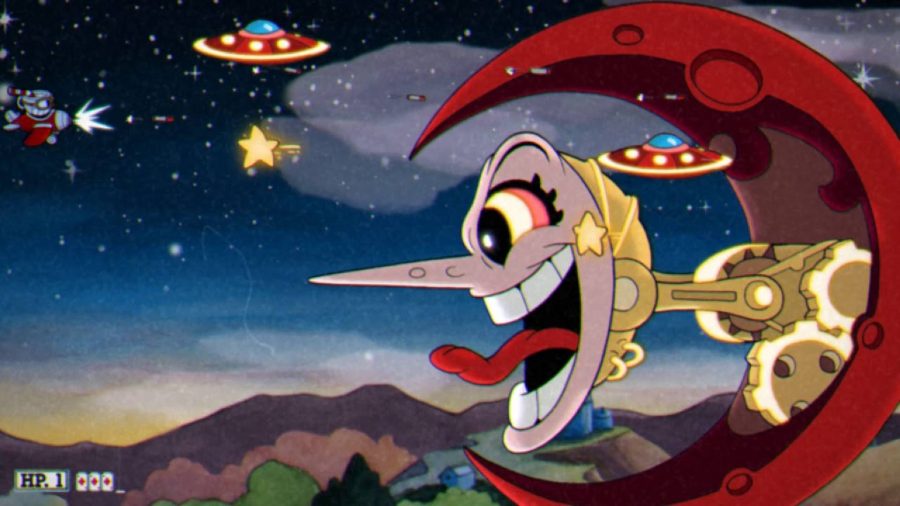 In Threatenin’ Zeppelin you must face Hilda Berg, who is for many, where the game really starts throwing some tough enemies your way. Unlike others, Hilda Berg doesn’t have strict phases, instead randomly swapping between a set few. This is also the first time you’ll fly a plane, so get used to the freedom of piloting through the clouds. Starting out as a red character on a unicycle, obviously, avoid the purple planes being thrown, but don’t forget her ‘HA’ is also an attack.

When she turns into a bull, be mindful of the charge, and listen for the little moo that signals it. When she turns into the two cloud characters, prepare for the pinwheel attack by taking out as many troublesome enemies on the screen as you can before you fly around it. The final phase is a large red moon with UFOs and star projectiles. It’s best to keep to the left of the screen so you have as much time between you and the projectiles as possible and make sure to learn the rhythm of the UFO attacks. You should have a knockout soon! 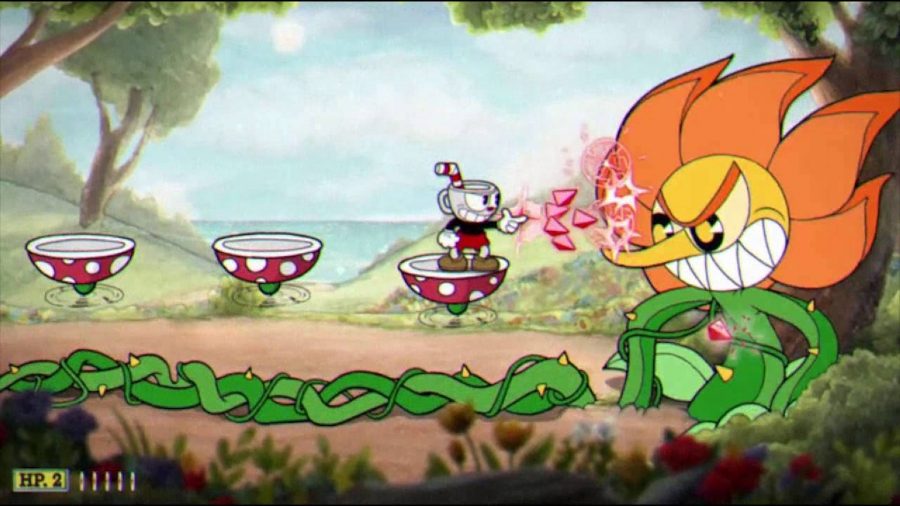 The boss found in the level Floral Fury, Cagney Carnation is one huge thorn in your side and a particularly furious bit of flora. As soon as the fight starts, jump onto the leftmost platform to put as much distance possible between you and the projectiles. When Cagney curls up to attack, be sure to pay attention to how high they are, as this gives away which level they will attack at when they unfurl. Watch out for the boomerang seed attacks, which naturally do come back to bite you.

As Cagney starts raining down projectiles in the second phase, make sure you watch out for the floating seeds above and drop down to the floor when you need to. During the final phase, make sure to keep an eye on the roots underneath the platforms so you don’t get caught out, and just patiently fire away. 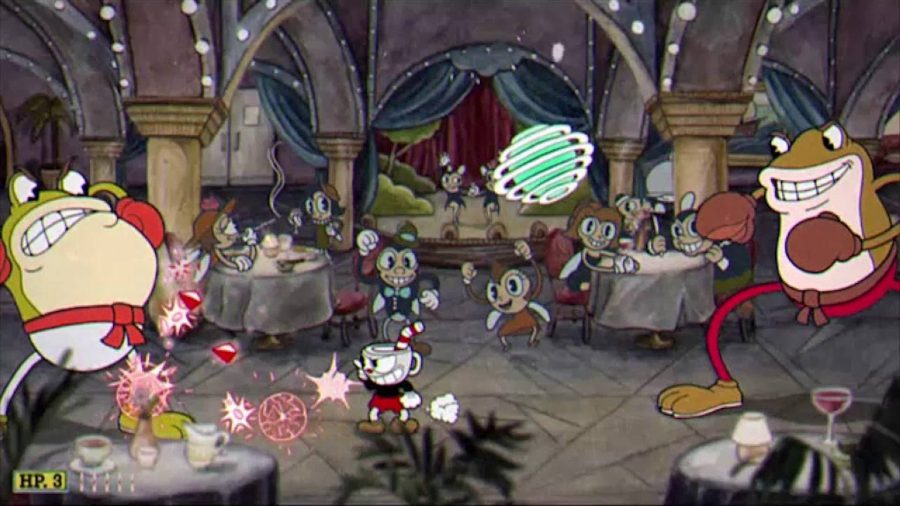 Two fiery frogs with an attitude, this duo are a real tricky one. To begin with, they stay on the right-hand side of the screen and lob projectiles, so get in close with a powerful weapon and just hammer them. Next up they work together to unleash a whirlwind attack while firing bounding balls, here, switch to the chaser, and just take your time waiting for the tornado to be over.

That’s it for now players, be sure to check back for even more bosses from Cuphead as we regularly update this guide. If you haven’t tried it out quite yet, why not read our Cuphead The Delicious Last Course DLC review to find out exactly what waits for you on the fourth Inkwell Isle.