Arsenal justified the pre-season buzz about their potential improvement with a deserved 2-0 win over Crystal Palace at Selhurst Park. Two new signings and one long-awaited Premier League debut will only add to the excitement.

Arsenal’s summer seems to have been an exercise in increasing pressure. A late-season slip that allowed their rivals to secure Champions League football ahead of them was followed by a documentary recording in detail how those events played out.

Throw in transfer spending in excess of £100m that appears to have addressed the main weaknesses. Add some impressive pre-season form that included thrashings of Chelsea and Sevilla. That concoction had Arsenal supporters hoping for much, much more. 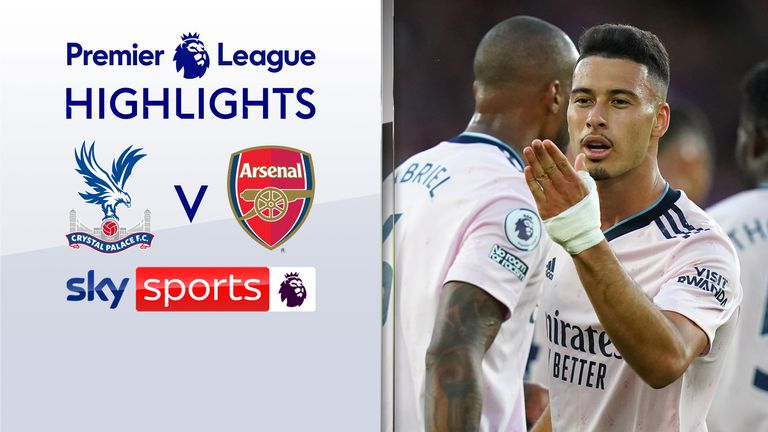 FREE TO WATCH: Highlights from Arsenal’s win against Crystal Palace in the Premier League

On this evidence, that optimism is vindicated. Arsenal started strongly, proving too quick and too slick for a Palace side made to look sluggish in comparison. When the pressure came in the second half, they held on before adding a second goal. It was impressive.

It has not always been that way on occasions such as this one. This is the second season in a row that the Gunners have kicked off their Premier League season under the Friday night lights. Last year, across the capital, they were bullied and beaten by Brentford.

More recently, on Arsenal’s last trip to Selhurst Park in April, there was an even more emphatic defeat inflicted. That 3-0 loss to Palace was miserable. Mikel Arteta’s side spurned the chance to move up to fourth place in the table, clear of Tottenham with a game in hand.

“It is time to accept the criticism, put your hand up and apologise because this performance was not good enough for this club,” said Arteta at the time. Subsequent defeats to Brighton and Southampton further curtailed the momentum. It proved costly.

Seven of the starting line-up for this game were the same but it is the identities of the new additions that have helped to change the mood. William Saliba is finally here. Oleksandr Zinchenko and Gabriel Jesus come with obvious pedigree as Premier League champions.

“We come here full of optimism. The new signings have brought more energy, quality, leadership and knowing how to win football matches,” Aaron Ramsdale told Sky Sports beforehand. “We are all trying to get into the same mindset as them.”

Winning transfer windows and winning matches are not the same thing, of course, but the signings from City and the returning Saliba all played pivotal roles in this victory. It is already clear that they can help Arsenal to become a better team this time around.

Left-back was a problem position for Arsenal last season due to Kieran Tierney’s fitness problems. Nuno Tavares was unconvincing and occasionally hapless, pressing Granit Xhaka into action in an unfamiliar role. The arrival of Zinchenko changes that.

Indeed, the Ukraine international could change rather more about Arsenal’s build-up play given that he is no ordinary left-back. His propensity to come inside to control possession was a feature of his play at Manchester City and there were signs of that here too.

“It is really interesting watching Zinchenko,” said Jamie Carragher, covering the game for Sky Sports at Selhurst Park. “He is picking up those positions inside that he did at Man City. Other times he is really high and wide. There is great mix in his play.”

It was Zinchenko’s positioning that led to the opening goal. Ben White’s decision to push forward to the edge of the box for an attacking corner distracted Wilfried Zaha and bought Zinchenko the space to head the ball on for Martinelli to score from close range.

Martinelli should have scored already by that point but that chance was all about the brilliance of Jesus. The sequence of play in the fourth minute epitomised his game – winning the ball back high up the pitch before wriggling free to create the chance.

Jesus was electric and his movement off the ball looks likely to make everyone around him better. That willingness to make runs off the ball was lacking from Pierre-Emerick Aubameyang and Alexandre Lacazette at times last season. Jesus is different.

“That is what he will bring to this team that they did not have last season,” said Carragher. “He is so sharp. He looks like he has a point to prove. He is now the main man. Every time he gets the ball around the box he looks like something is going to happen.”

It still needed some good defending for Arsenal to claim the points and much of that came from Saliba. Supporters had waited three years and three loan moves to see him in the side and he did not disappoint with a commanding display in difficult circumstances.

Ben White, pushed to right-back to accommodate the France international, was struggling to contain Zaha. But when White was beaten, there was Saliba. His tackle inside the penalty box early in the second half was expertly timed and absolutely essential.

The distribution was simple but effective. He had the best passing accuracy of anyone on the pitch. When the ball had to be headed away, he was there. No Arsenal player made as many clearances as he did. “He was very impressive,” said Carragher.

“Even before you see him play, he looks like a player, he looks the part. You are just looking for signs of it and for such a young age, how he dealt with that second half, a couple of times helping out Ben White and balls into the box. He looked the real deal.”

He needed to be good because Palace did not make this easy, pressing hard for the equaliser before Marc Guehi’s unfortunate own goal. Arsenal withstood all that. Yet another encouraging sign. And so, Arteta’s words in the build-up to the game proved prophetic.

“To build that unity and desire to be together doing something special has been extremely tricky but I think we are in the right place and everybody is excited about it.” This result – and, in particular, these new additions – will do nothing to quell that excitement. 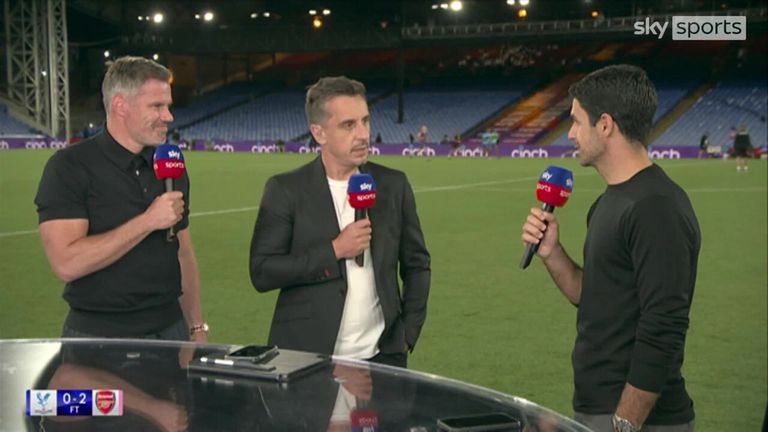 Neville: ‘Saliba reminds me of Rio’

“We see a lot of players get stuck in between the first team and the reserves, and they don’t get football.

“Saliba has got football inside him and I was massively impressed by him.

“It reminded me of a young Rio Ferdinand. He’ll actually get stronger, and his body will become more coordinated. He’s such a young centre-back still at the age of 21.

“Crystal Palace away, that is a tough away game in the Premier League because they do throw everything at you. The forward players at Palace challenge you one on one, they drive at you all the time and they never give you a moment’s peace.

“That is a big night for Saliba, making his debut with such a strong performance.

“The clean sheet, coming through that second half when maybe Arsenal weren’t at their best in that part of the game, was the most enjoyable thing for Mikel Arteta tonight.”

“It was hard, but we are happy to win today,” Saliba told Sky Sports after his man-of-the-match display.

“We conceded some chances, but we were strong and solid.

“It’s the first game. We knew it would be hard here, so we stayed compact and strong, and that’s good for the team. It’s important to win for confidence.”

After signing for Arsenal in 2019, Saliba was loaned back to Saint-Etienne and has since had two further seasons in his native France, most recently spending last season with Marseille.

“I have waited a long time for this moment and I’m happy to start my first game with a win and a clean sheet.

“It helped me to spend two years on loan in France because I am young and I need to play. Now I am back and I hope we can have a good season.”