As someone with a self-confessed pedigree of playing GBA-era Pokémon games, I’ve been readily anticipating the arrival of Coromon on Switch for some time now. You see, the problem is, I just can’t get enough of catching-’em-all, and if the development of Coromon, all of the other monster-taming RPGs, and the Pokémon GBA hacks that pop up every other week are anything to go by, neither can anyone else.

That’s how we’re here, post-Switch launch with Coromon now out in the wild. If you didn’t catch any of the hype in the run-up to the release, or if it wasn’t obvious enough from my introduction there, Coromon belongs to the abstract catch-’em-all genre, blatantly lifting core gameplay from the mainline Pokémon games, otherwise known as a monster-taming RPG, with a very similar design and look to the late GBA era the series.

It’s all on purpose, of course. Coromon isn’t exactly shy about how it’s aiming its title at fans of Game Freak’s franchise who wish that the graphical improvements the series has seen in recent years had never happened at all, as well as those who want a hybrid fix of nostalgic new content, and the similarities are littered throughout your experience with TRAGsoft’s monster-tamer. That is to say, besides the monster names and designs, at points, it’s almost uncanny.

The story is the first divergence from the formula you might anticipate in a catch-em-all, though the change is not dramatic, and you won’t notice many deviations during the initial set-up. There are three starter Coromon, Torgua, the fire type, Nibblet, the water type, and Cubzero, the ice type, which a Coromon scientist allows you to decide from at the beginning of your adventure. I chose Nibblet, but all three are intelligently designed, with that classic mixture of cute with a slightly threatening aura. 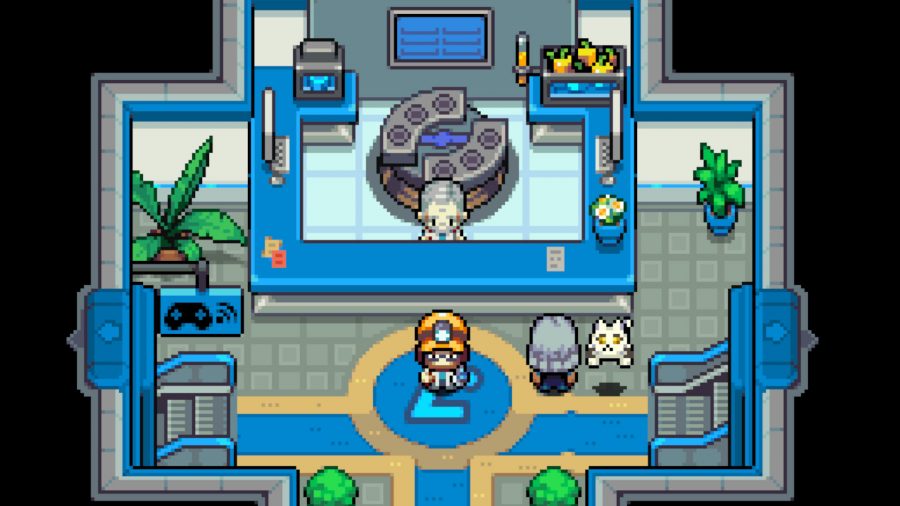 The rest of the core narrative is less by-the-book when compared to Coromon’s inspiration, leaning away from gym leader or Team Rocket-type trainer challenges at the important beats in the story. Instead, Coromon’s boss battles are predominantly against the six titans of specific types whose essence you need to collect for plot reasons, each of which provides a solid challenge, with a similar feel to the totem Pokémon battles from Sun and Moon.

The plotlines take place across six biomes, each with its own abundance of a particular typing. These areas are meticulously crafted and are admittedly much more lush, vibrant, and occasionally intimidating than their ageing inspiration, and even with just 120 creatures across the various plains, caves, and hidden places, there’s enough variation to make the in-game world feel bigger than it is.

The crux of the gameplay is what you might expect,  at least for the most part. You fight Coromon, catch Coromon, and train Coromon through turn-based battles with the various wild and trainer encounters found throughout the game world. There are four in-battle options you might well be acquainted with already – fight, item, party, or run – but there’s some change to the dynamic with PP being shared across all moves in Coromon, rather than set to individual attacks. 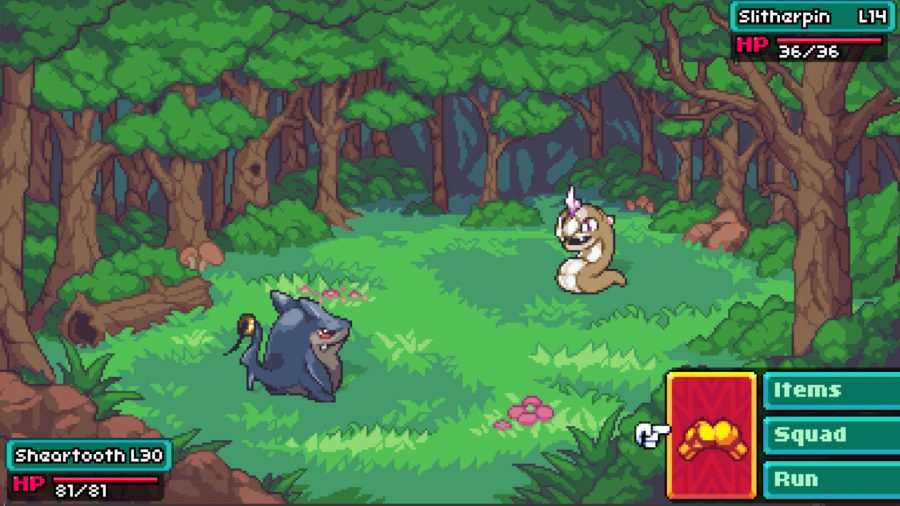 One of the big draws of Coromon really is that it takes a lot of the annoying little complications of Pokémon and puts them in the bin. The needless trips to the name rater and move relearner famous from Game Freak’s series are entirely absent. Instead, you can change the name and moves of any of your party members from the main menu at any point. All this as well as a built-in Nuzlocke mode – Pokémon fan’s favourite self-imposed hard mode – and various options the community regularly calls for in Pokémon games.

These subtle changes, as well as others like the lack of HMs, the replacement of Pokeballs with Beyblade-like spinners, or the unique Coromon status effects, do go some way to differentiate the game from its obvious inspiration, but it also feels like there is no will to take it any further. As someone who’s played a lot of these types of games – TemTem, Monster Crown, Nexomon – it’s most like the latter in that it struggles to distinguish itself truly.

As a lifelong fan and avid replayer of the main series Pokémon games, I did enjoy the simplification of the borrowed mechanics in Coromon, even compared to some of the more contemporary iterations of Game Freak’s smash hit. The problem is there isn’t enough to differentiate through gameplay, graphic style, gimmick, or any single element. 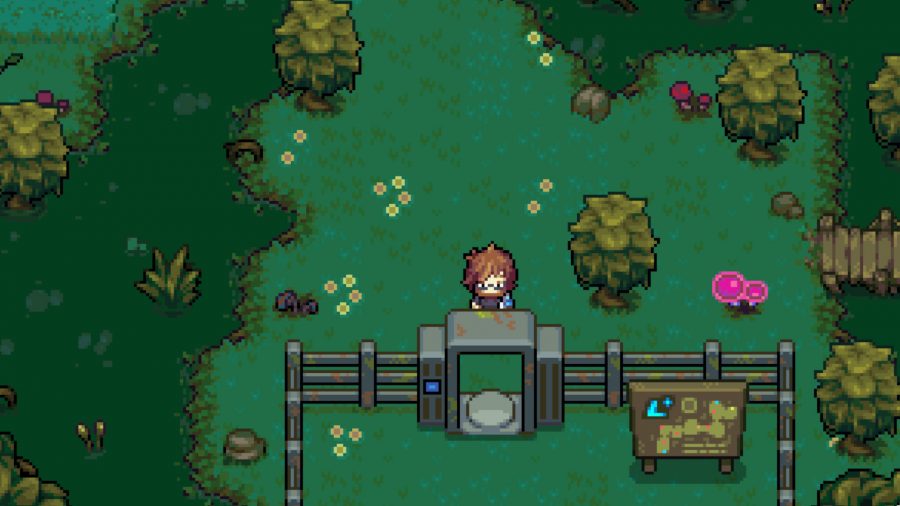 There’s also an inherent issue in Coromon highlighting some weaknesses in the mainline Pokémon series through its wholesale changes, in that the inverse effect is also pretty common. The lack of dual-typing is the most noticeable missing link from other monster-taming titles. The trimmed-down single typings of Coromon remind you of the incredible depth of possibility that dual-typings offer to the Pokémon battle system dynamic, and it can at times feel a little basic.

The same goes for the catching mechanic, which I thought could have been an easy win for adding something to distinguish Coromon from its primary inspiration. Of course, messing with catching mechanics can go wrong, as my experience with Nexomon’s finicky system taught me, but even down to the three-spin animation before the capture is confirmed, things just felt too similar at points, and if I was really in the mood to play an old-school monster-tamer with a difference, this is another point that might lead me to one of the other various tribute titles.

There’s an attempt to change up the catch-’em-all formula by doing away with gym battles and opting instead for more dungeons, and a lot more puzzles than you might expect from the genre. Now, I’m going to be honest here and say that there’s a possibility that the reason I didn’t find the emphasis on puzzles that engaging is, well, because I’m not that big a fan of puzzles, even in other RPG titles, and it’s just not one of the gimmicks occasionally seen in the Pokémon series that I personally long to relive. 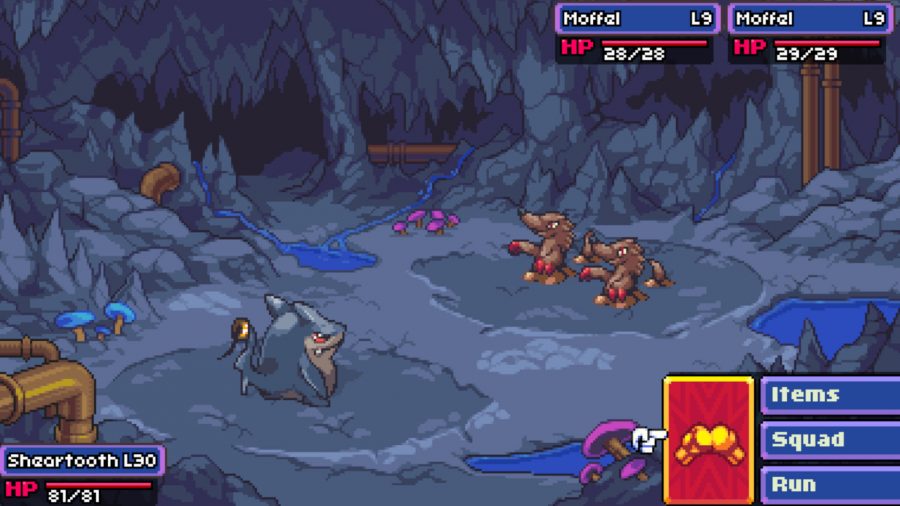 All that isn’t to say that the puzzles you find in Coromon aren’t well designed. If you enjoy Zelda-like puzzle gameplay, or the Trick House of Pokémon Ruby, Sapphire, and Emerald, then you will be right at home here. It’s just that as someone who isn’t drawn to that type of gameplay, I found the puzzle sections to be a little bit of a nuisance between plot and catching more Coromon, but if anything, that might just be a complement to those two elements.

Those two elements should be complimented, too. The design of the Coromon, at least all the Coromon I encountered, is top quality for a game of the genre. All three starter evolutionary lines are strong and stand out as some of the best designs across the whole game, but Coromon like the ghost-type white wolf Lunarpup, the normal-type helicopter bug Pitterbyte, and electric-type goo that is Gauslime also shine as monster’s that would be a welcome addition to any series, with more charm than some of the forgettable, or regrettable, Pokémon designs in recent years.

In terms of plot plaudits, while the primary narrative objectives are as fluid and vague as it often is in games that have to hang a plot around a primary mechanic, that being the Coromon themselves in this case, things move along quite nicely thanks to delightful delivery of the sort of tongue-in-cheek dialogue you expect from the genre. While the fate of the world is at stake, as it almost always is in these things, the game doesn’t try to take itself too seriously, and that suits the overall aesthetic and playability of TRAGsoft’s title. 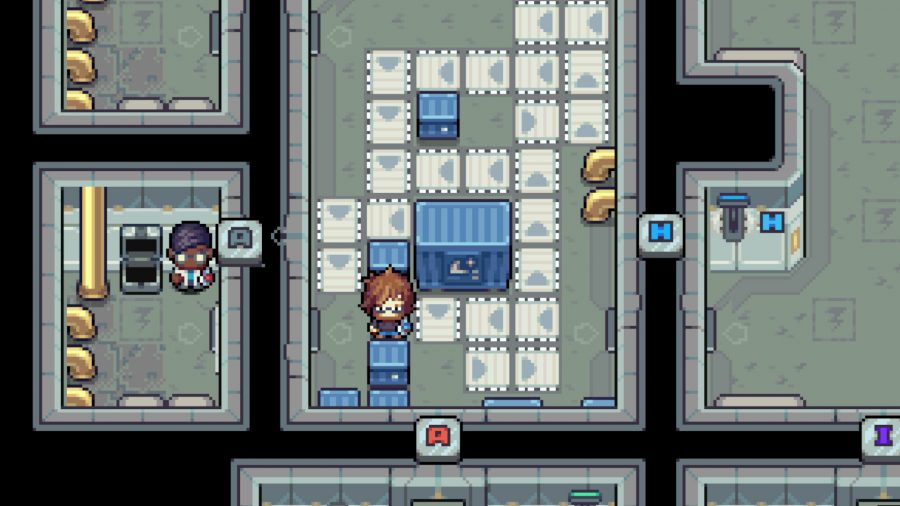 Unfortunately, these positives don’t take away from the fact that Coromon just feels like it’s missing a little something. It’s a great shame too, as it’s clear that there is at least the whiff of an urge to expand on the main inspirations for the game; it’s just the gimmick they’ve chosen to concentrate on might not be as successful, at least in my experience, as the double battle emphasis in TemTem, or the cross-breeding possibilities of Monster Crown.

In saying that, I’d still heartily recommend Coromon to anyone with a lot of time for Pokémon, monster-taming titles, or nostalgia-infused RPGs. Despite the slight lack of dynamic in the battle system, and the reluctance to push the genre forwards, this is an incredibly playable game that knows its audience, and delivers the core materials to put together a title that pays fitting tribute to its inspirations.