I love classic JRPGs. I’ve played the original Final Fantasy VII more times than I can count, and shout my passion for the series at any chance I get. As well as FF, Persona, Pokémon, and Kingdom Hearts all hold a place in my heart, and inspired me to get into the job industry I’m in today. And yet, I never took the time to play Chrono Trigger or Chrono Cross.

Chrono Trigger always appealed to me, as I know it comes from the minds of Hironobu Sakaguchi, creator of the Final Fantasy series, Yuji Horii, creator of the Dragon Quest series, and Akira Toriyama, author of the Dragon Ball manga series. I even downloaded the game onto my iPad last year, but for some reason, I never actually played it.

That’s where Chrono Cross: The Radical Dreamers Edition comes in. This game is set in the same world as Chrono Trigger, but has a different development team, which, I’ll admit, made me ever so slightly less interested in playing. However, when it initially launched on PlayStation back in 1999, Cross received near perfect review scores, and sits comfortably at 94 on Metacritic. So I had to give this classic a try.

To the best of my knowledge, you don’t need to play Trigger to understand Cross, despite them being set in the same universe. You may notice nods to the first game if you’re lucky enough to have played it, but I didn’t find myself lost at any time. I will warn you though, you may find yourself desperate to give Trigger a go once you complete Cross. 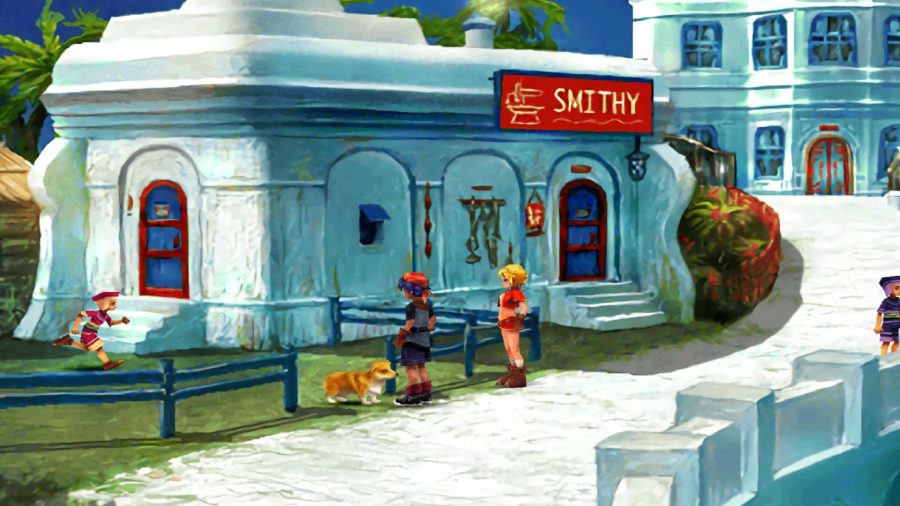 To give you a quick rundown of the story without too many spoilers, the game follows Serge, a young man who’s somehow transported to an alternate reality in which he died ten years before. You soon partner up with a feisty girl named Kid, and together, you attempt to work out how Serge made it to this new world, and face down Kid’s enemies.

From the start of the game, the Switch enhancements are very clear. You can choose to play the game with a classic or new graphical style, speed up or slow down time, and change the screen resolution, among other things. As the name of the game suggests, this edition also features The Radical Dreamers, a text-based adventure that Square originally released in 1996 for the Satellaview.

During my first hour with Chrono Cross, I spent a lot of time running around like a chicken with its head cut off. The battle system doesn’t feature a baked in tutorial, and you can easily miss it if you don’t speak to everyone during your first trip to Arni Village. I highly recommend you talk to Arni and learn everything you can about attacking and elements, because as soon as the battle system becomes clear, everything else gets a lot more interesting. 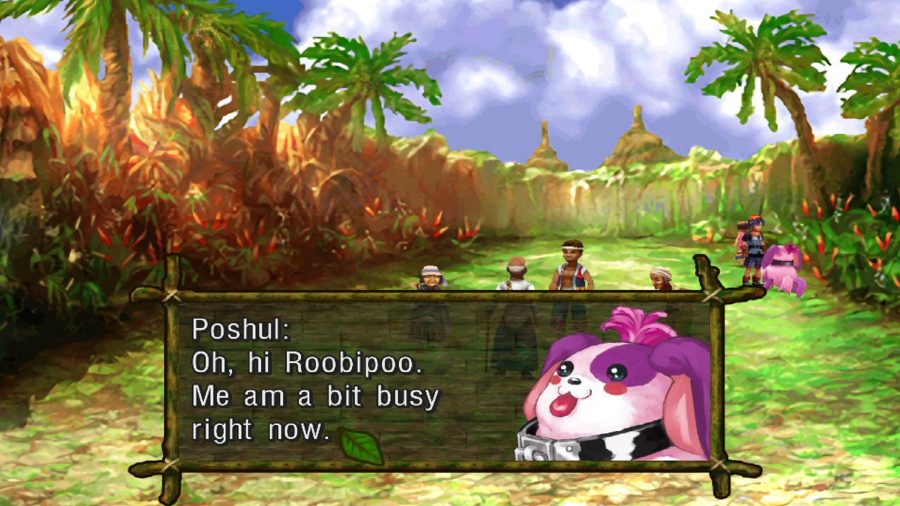 After my initial battle system qualms, I realised it’s relatively easy to grasp. You can choose three different attack types with varying accuracy and power, or use an element to cause even more carnage. It takes a while to understand which colour element works well against certain foes, but it becomes second nature the more you mess around with your characters.

Unfortunately, despite the battle system having some great potential, there’s quite a lot of input lag when choosing attacks, and I often worried that when mashing the A button, I may press the wrong button in frustration. The performance issues extend beyond the battles, but as I look at the game through PS1 nostalgia goggles, general framerate issues don’t bother me too much, and weren’t constant.

Outside of combat, I very much enjoy the gorgeous soundtrack, character redesigns, and even the HD rumble. As someone who has literally no experience with Chrono games, I was surprised to find each of the towns so vibrant and full of life. Whenever I play a JRPG, I love to speak to every person possible, learning every little detail about the world around me. 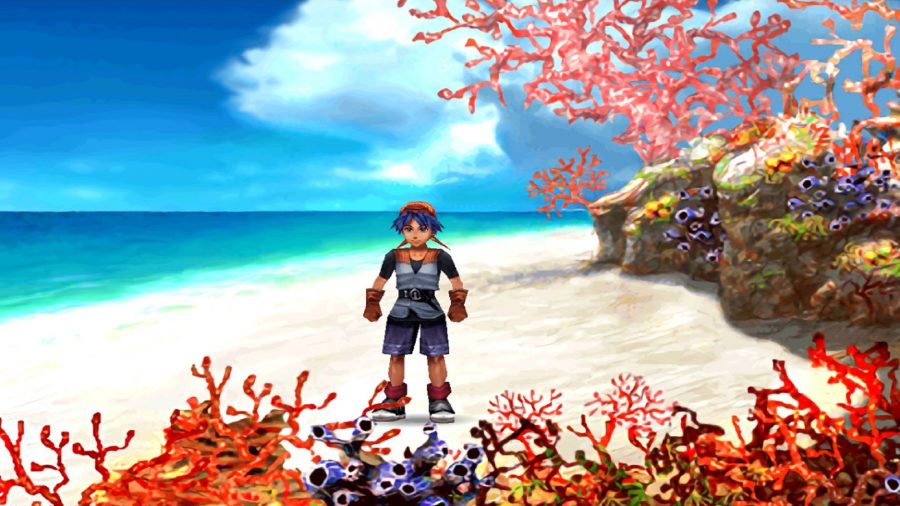 Much like many PS1 games, Chrono Cross isn’t an open-world game. Instead, it features a static world map that you run around to enter new areas. I think the map is absolutely gorgeous. The colours are amazing, with vibrant highlighter greens, deep blue oceans, and fiery reds that all mesh together seamlessly. The colours and style you find on the world map and in towns are reminiscent of Final Fantasy IX, and the static backgrounds are just lovely.

One of my favourite early-game areas is Opassa Beach. It may be very small, but it’s a great example of how much detail the game has. As you walk across the sand, the ambient sounds of your footsteps in the sand and the waves crashing is soothing. Almost every area you visit is worth exploring completely, just so you can take in your surroundings, speak to the townsfolk, and potentially pick up some goodies as well. 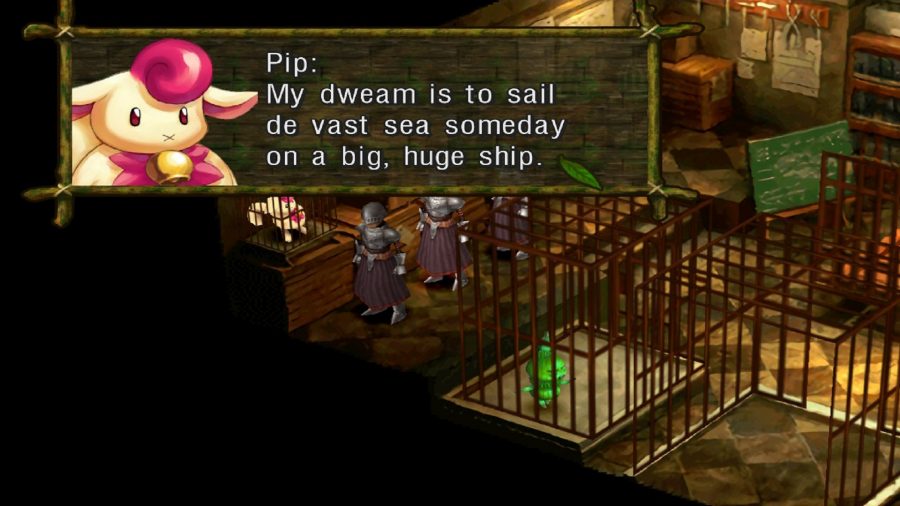 Another part of the game that deserves praise and sets it apart from other classic JRPGs is the massive cast of recruitable characters. There are over 40 unique fighters who can join you on your journey, and not all of them are obtainable in your first playthrough. My favourite character I came across in my first playthrough is Pip, an adorable little lab experiment that you must free from a cage and then later track down aboard a ship.

Each of the characters helps make the game feel a little more personal, if you don’t like Serge, swap him out for someone else. Maybe you want a team full of cute little misfits, you do you! They also give the game replayability, as each of the personalities is so intriguing, that you’re going to want to try out each of them as soon as you can.

Despite my general qualms with the button lag and overall performance of Chrono Cross: The Radical Dreamers Edition, I think this is a great way for classic JRPG fans to play this gem without having to track down a PS1 copy and dust off the old console. I’m also a big fan of playing epic 40-hour games on the go, and the Switch is absolutely perfect for that.