I’m a rather versatile gamer, sure RPGs and horror are my passion, but I certainly appreciate action, adventure, simulation, indies, and, of course, I love a good shooter. There’s something about FPS games or a standard shooter that pulls me. Perhaps it’s because they don’t require excessive concentration, tough decision-making, and horrifying moments that have you screaming ‘mummy’.

So, it’s unsurprising that Bright Memory: Infinite caught my attention. It’s a high-action shooter that also lets you slash things with a futuristic sword. What’s not to like? A fair bit, as it turns out, but we’ll get onto that later. Let me set the scene for you. I feel like we should go on this journey together.

You play as Shelia, an incredibly badass agent that knows how to handle herself in battle. The game begins with you in a rather nice hotel room, the television plays in the background, and you receive a call on a mobile phone that’s clearly having an existential crisis as it can’t decide whether it’s transparent or not. Anyway, this conversation results in Shelia receiving what we can only assume is a perilous assignment.

You play as Shelia, an incredibly badass agent that knows how to handle herself in battle. The game begins with you in a rather nice hotel room, the television plays in the background, and you receive a call on a mobile phone that’s clearly having an existential crisis as it can’t decide whether it’s transparent or not. Anyway, this conversation results in Shelia receiving what we can only assume is a perilous assignment. 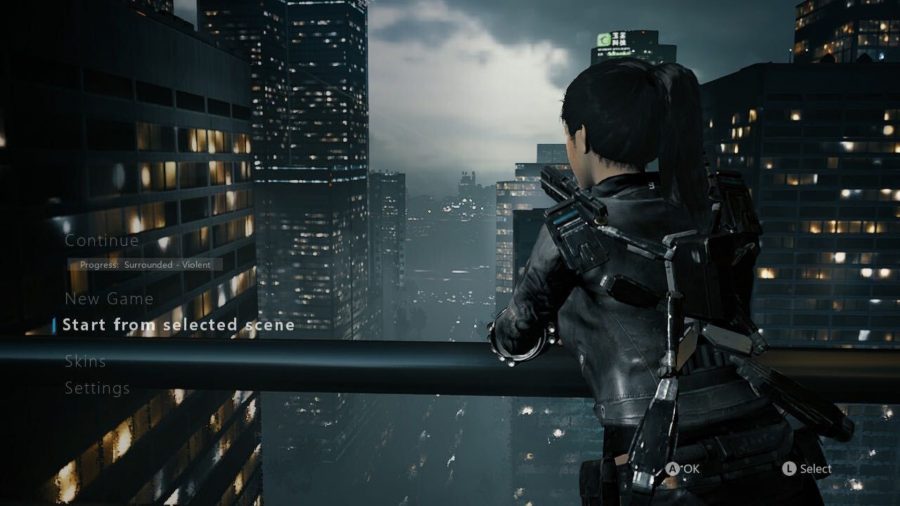 To get this show on the road, you need to land the futuristic plane you’re in control of. Once you do, it’s time to go on what feels like an endless hunt for something I’m not sure really matters, but that’s by the by.

Soon enough, you encounter some enemies, and this fills me with joy. I was keen to get shooting. I pulled the trigger and fired off some shots from the hip, dealing with those right in front of me. Then, it was time to look down sights and take out the enemies that rightfully chose to keep their distance, and this is when I realised Bright Memory: Infinite is nothing like any shooter I’ve played before… because aiming down sights is so inaccurate that I’m left pondering whether or not it’s time to go to Specsavers.

That’s right, the accuracy is so abysmal that it’s actually easier to hit your enemies at a distance from the hip. The sway is unbelievable, and it’s unfortunate, but for the first couple of hours, bugs hindered my experience when aiming down sights. It caused the game to slow, frame rates to drop, and the graphics became blurry. 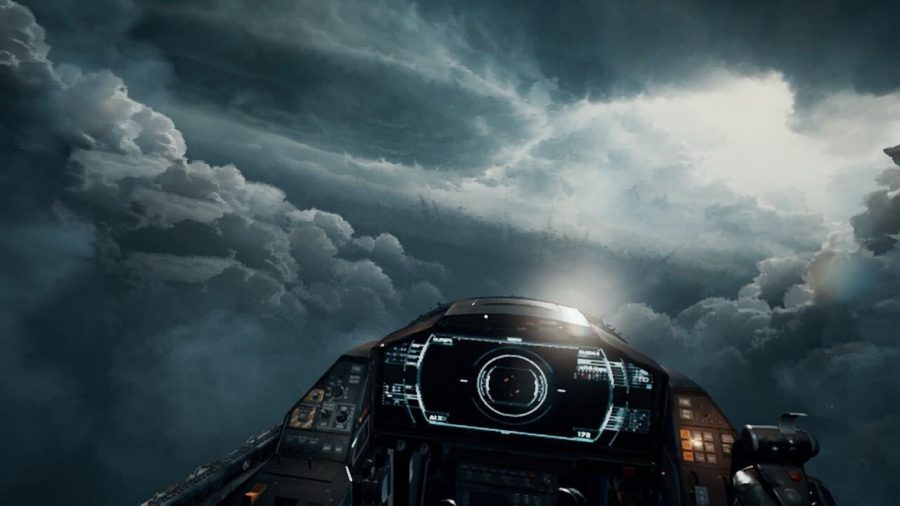 In fact, let’s hone in on the sniper rifle in particular. Yes, we all know that this sort of firearm can be tough to handle, but you usually have the option to hold your breath to steady yourself, something that Bright Memory: Infinite lacks. Unfortunately, the sway is so bad that your best shot is to randomly pull the trigger and hope for the best. However, even if you manage to execute an accurate attack, you might not even hit the enemy as sniper bullets have a tendency to go through them.

However, I do have a couple of positive things to say in regards to combat, the first of which is for the shotgun. I am a lock and load kinda gal, and the shotgun fits that bill perfectly. Plus, the game actually performs well when you use this firearm, as it does for the most part with pistols too (though aiming down sights can still be dodgy, but I can’t deny my love for sidearms).

Furthermore, I actually like the swordplay. Using the blade feels smooth, and it gives you that badassery feeling that should come with slicing and dicing. Not only that, but you can upgrade the sword to emit an energy pulse wave so you can use it at a distance, which leads me along nicely to the abilities system in Bright Memory: Infinite, and it’s something I enjoy as it offers a range of techniques that truly do enhance your experience. 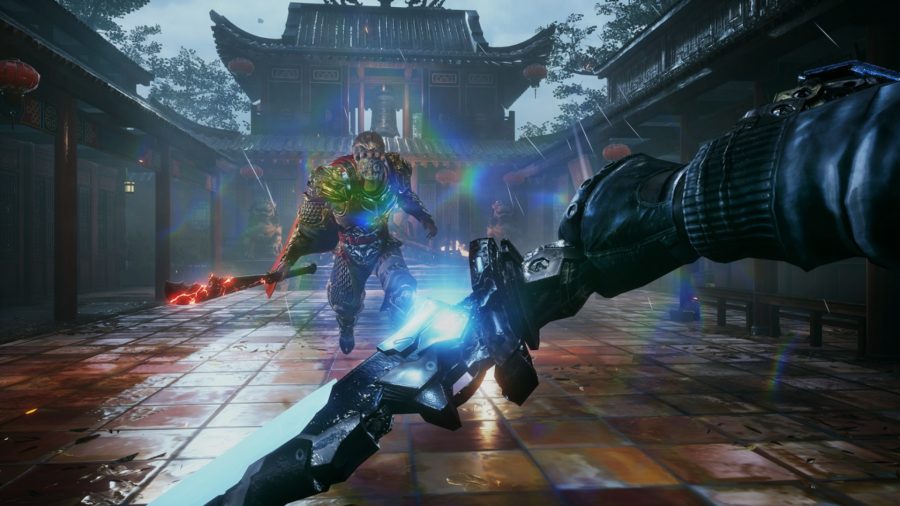 You can unlock additional skills for your blade, exo unit arm, and firearms. For the exo arm, you can get an emp wave, a tractor beam, and a variety of punches that have you running around as though you’re the next Mike Tyson. As for the sword, you can purchase a range of slashes that provide different combat benefits – my personal favourite is the blade slash whirlwind, as not only does it look amazing, but it causes continuous damage for a few seconds.

Finally, when it comes to firearm abilities, you can unlock a range of attachments such as a grenade launcher, tracker shells, and a shrapnel bomb. To get the currency you need for skills, make sure you keep an eye out for green idols as you traverse the level.

Now that I’ve disarmed the gunplay and combat in this game, let’s move along to the protagonist. Above, I describe her as badass, a sentiment I do believe given she’s clearly a brawler. However, a good fighter doesn’t make a leading lady. She has the charisma of a potato. Honestly, it feels like basic character design is slightly overlooked, and had the gunplay been up to scratch, this would be forgivable, but it’s not, and thus the lacking protagonist stands out that little bit more. 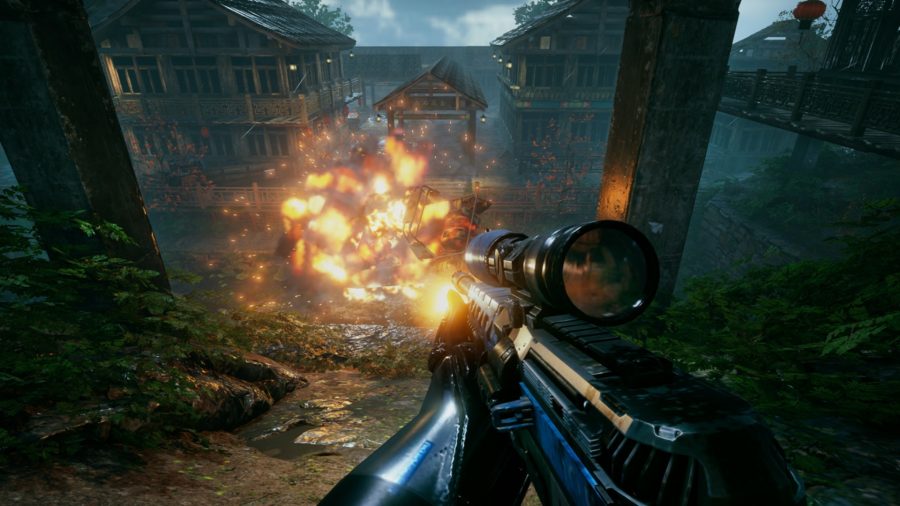 Plus, when it comes to the main character of any game, you, as the player, need to feel something for them. They should ignite something in you, it should matter what happens to them, and it should make you want to see them succeed, just like a good villain emits a rage deep inside (though the best antagonists actually make you understand their plight, and the top tier bad guys even win you over). However, with Shelia, I feel nothing for her. Less than nothing. She dies, and it’s like ‘huh, that was a thing’ rather than ‘damn it! It’s cool, we’ll get out there and kick some butt’.

Fortunately (or unfortunately, you decide), the enemies don’t overshine Shelia, for the most part, as the majority of them feature a mediocre design that lacks a bit of oomph. Perhaps I’m being a bit harsh, as they do serve their purpose, but there isn’t a great deal in the variety of enemy types, and when you combine that with less than stellar gameplay, things become tiresome rather quickly.

However, a couple of the boss fights are well designed, and they certainly look the part, had the developers been consistent in this level of quality throughout the entire game, they’d have a real gem here. Some of them look menacing, and the ancient Chinese aesthetic that adorns them is fantastic, not to mention the authoritative aura they emit. To top it off, numerous boss encounters are a real blast and demonstrate Bright Memory: Infinite’s potential. 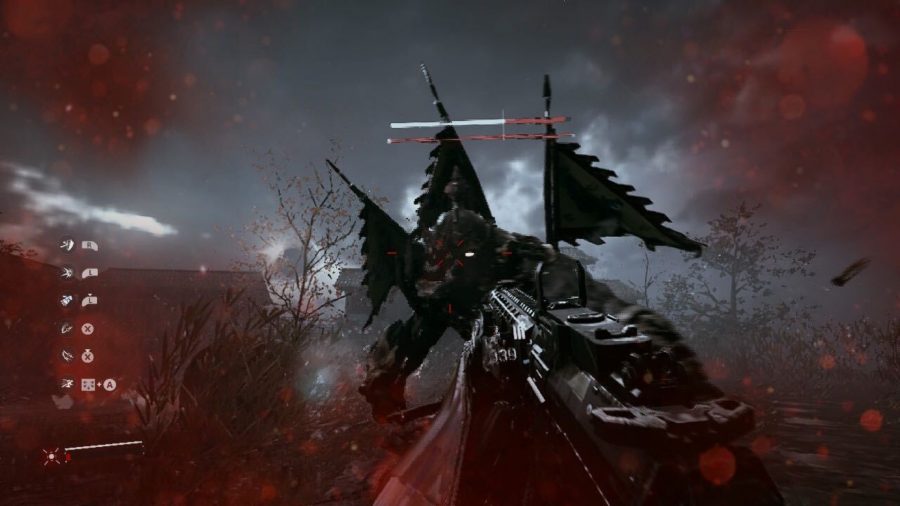 I know I’ve really hammered away at the gunplay and character design here, but when the game works as it should, it’s an enjoyable experience. It’s just that during my time with Bright Memory: Infinite, the majority of it was tainted with an abundance of performance issues, yet I did persevere through, which in itself should say that when it works, the game fits the bill for an easy-going shooter.

From a narrative perspective, there’s nothing you haven’t seen before in Bright Memory: Infinite, but that doesn’t mean it isn’t somewhat decent, though let’s be honest, you don’t play a shooter for the story, you play it for all the pew pew pewing you can do, which, in case it isn’t obvious enough already, feels below par in this game. Though there’s some intrigue in the narrative design, but I won’t go into details as I don’t like the idea of giving you any spoilers – just know that if you choose to play the game, you do at least get something from the story.

Bright Memory: Infinite takes you to a place that has the potential to be incredible to explore, or to at least provide you with some variety in how you approach combat.et, it does nothing of the sort, which is a shame as the in-game environments are modelled after real-life locations in China, a country well known for its architectural beauty. The design of the levels are okay. The settings look decent enough while you’re surrounded by buildings, though when you end up in a field, the graphics once again let the game down as it becomes reminiscent of a PlayStation 2 game. 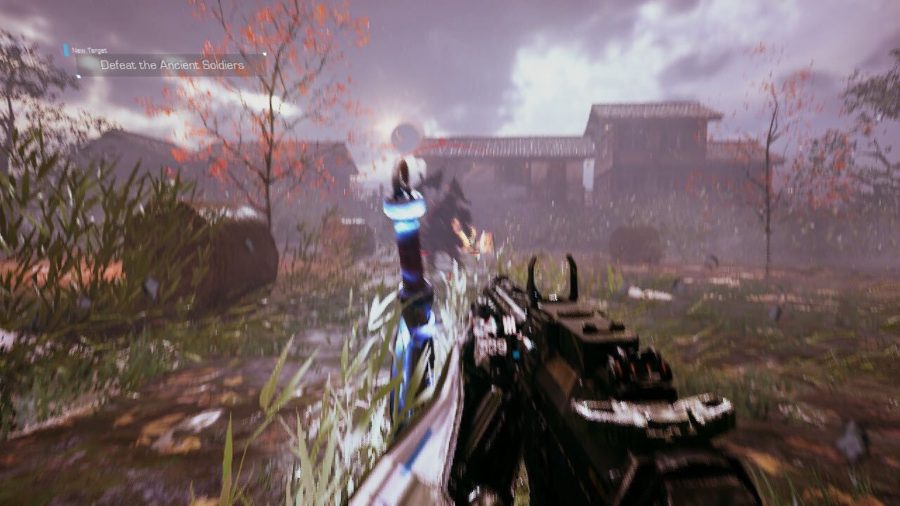 I’ve already touched upon some of the issues I’ve encountered, including framerate drops, blurriness, and the environment not loading properly, but on Switch, I also came across the odd screen tear. Honestly, the number of bugs and issues that are currently in the game leave a lot to be desired, and this all culminates in making the game that much less enjoyable.

Honestly, the most annoying thing about the bugs, performance issues, and less than satisfactory gunplay is that there are the makings of a good shooter here, and when the game does work as it should, it’s a fun time. However, in its current state, I can’t recommend that you rush out to buy it, on Switch at least. Should an update drop in the near future, that could change, as I’d consider it to be a good time if you’re after a small shooter, should the numerous problems be addressed.

Should FYQD-Studio provide a performance update on Switch, I’ll certainly dive back in as I can’t help but reiterate that when Bright Memory: Infinite works well, it ticks a lot of the boxes for an action shooter.