Farm games have been a staple of the gaming scene for a long time now, with countless developers creating their own spins on the formula over the years. The advent of mobile gaming in particular has given rise to quite a long list of new farm games, perhaps, in part, because they’re so well-suited to being played when you have a few spare minutes that you want to fill with something de-stressing.

Because there is such an abundance of them, we wanted to make a list of all the best farm games. There’s something about this particular genre that makes it so addictive, but also, very relaxing – whether you prefer the more cartoony style of Harvest Moon, or are more drawn to something like Farm Simulator 20, which opts for a slightly more realistic approach.

This list is by no means comprehensive – there are so many good farm games out there, and if we took the time to list all of the good ones, we’d be here all day. We’re sorry if your personal favourite didn’t make the list, but we hope that we can introduce you to a game that you might not have tried otherwise.

The best farm games on mobile

We thought we’d start the list with a free game – after all, nothing beats a relaxing farm game experience that you don’t even have to pay for. In this game, you take control of a character who has moved to the titular Sunrise Village to begin a simpler, more peaceful life.

Then once you’re playing, it’s all about gathering crops and resources so that you can fulfil orders and expand your farm’s capabilities by buying new supplies, and building new facilities on your land. It’s a simple, enjoyable game, and one that could become very addictive.

Minecraft isn’t exclusively a farm game, but if that’s how you want to play it, then it can totally be a farm game for you. From building barns for sheep and cows so you can harvest their wool and milk (or mushroom soup, if you get a mooshroom), and plenty of crops for you to tend and grow, it’s very possible for you to dedicate all of your time in Minecraft to building and running the ultimate farm.

Meanwhile, there are tons of farming-adjacent activities for you to enjoy, like fishing, mining for ore, tending to bees, hunting, and about a thousand other things too. It’s a game where you really can do whatever you want, but it’s especially well built for anybody who looks a good old fashioned farming sesh.

“This article about mobile games has an Xbox game in it! Well, I won’t stand for it, I’m calling the police and I hope the author gets the chair.” While that would be a perfectly balanced and well-adjusted response, Viva Piñata: Trouble in Paradise is actually playable on mobile devices thanks to Microsoft’s Cloud Gaming service. Check out our list on every Xbox Game Pass Ultimate game on xCloud to find out which others you can play.

But, anyway, let’s talk Piñatas. Created by legendary developer, Rare ltd. (the geniuses behind Banjo-Kazooie, Donkey Kong Country, and Sea of Thieves), this game is kind of like a hybrid between Pokémon and Animal Crossing. You have to tend a large garden, which, over time, attracts all kinds of living Piñatas (including cows, sheeps, horses, and even crocodiles, unicorns, and dragons) with each of them needing you to grow special plants, fruits, and vegetables – an atypical farm game, but a farm game to be sure. 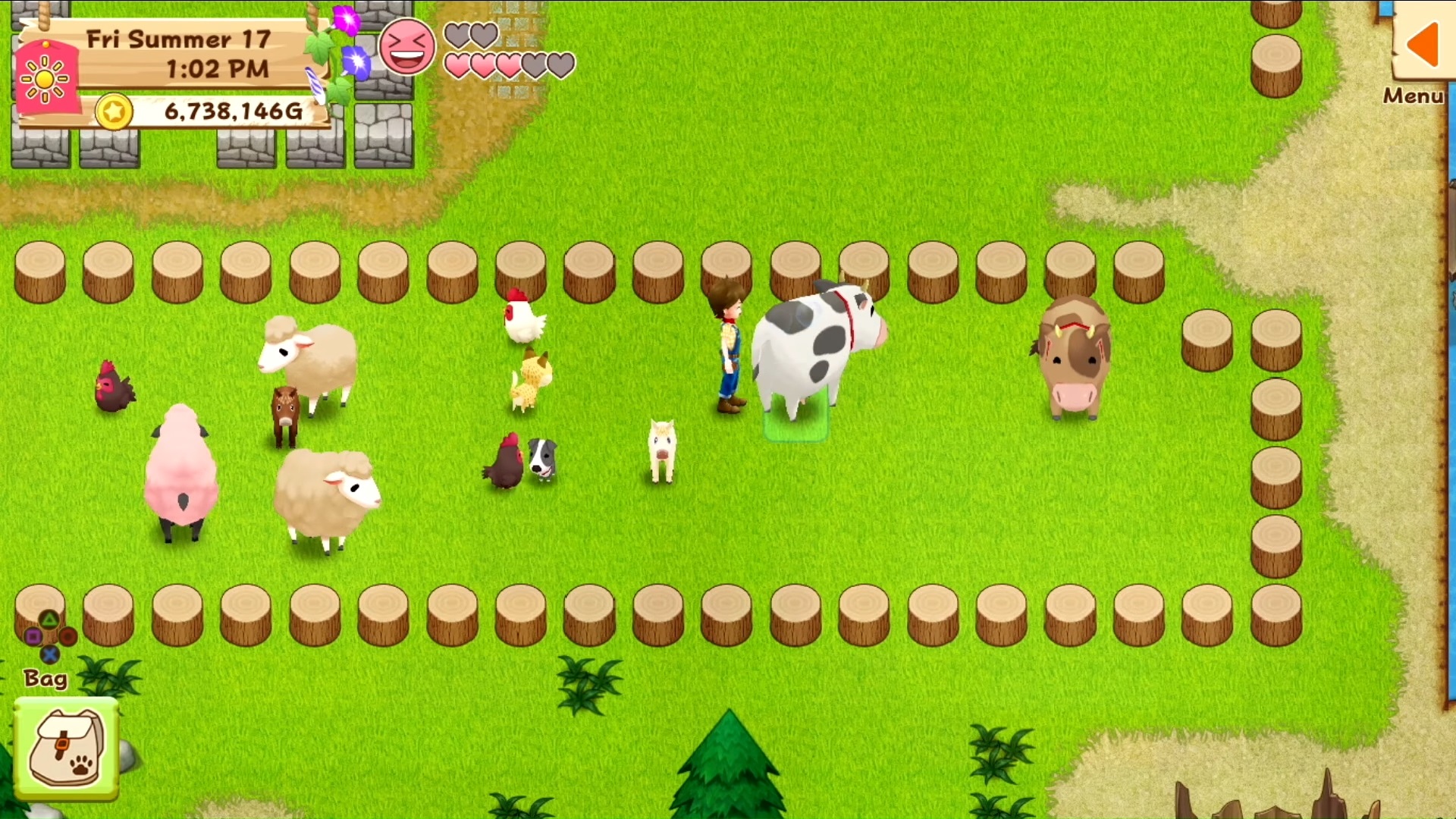 Harvest Moon is pretty much the OG of farming games, and while legal complications have spilt the series in half (with some of the games now releasing under the name Story of Seasons), that doesn’t change the fact that Harvest Moon: Light of Hope, is a fantastic mobile instalment in the series.

In this one, you play as somebody who washes ashore on an island with a harbour town. Once you’ve recovered, you start your own farm on the island and have to find certain artefacts to help you restore the power of nature in your new home. With farming, fishing, and mining to fill your time, plus a chance to revisit many characters from Harvest Moon: Skytree Village, there’s a lot to enjoy in Light of Hope. 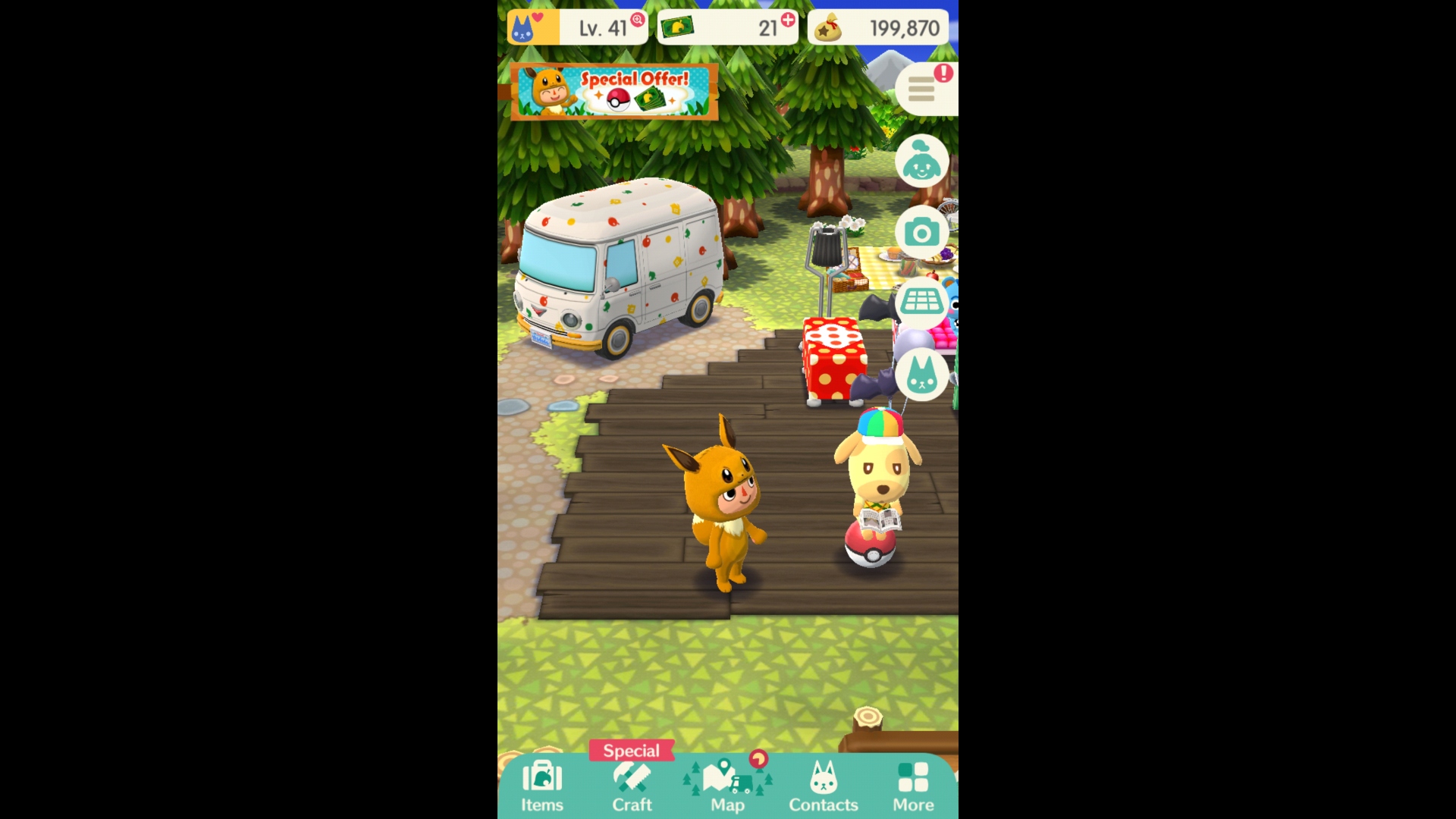 The mobile phone instalment in Nintendo’s Animal Crossing franchise offers a unique and addictive experience which is quite different from the console counterparts. While you’re not literally running a farm in this game, it has so many of the same features, that it doesn’t feel wrong to count it among farm games.

In this version of Animal Crossing, you run a campsite and have to add new features for it, while persuading animal characters to come and stay. To do this, you’ll have to gather and trade fruit, tend to flower beds, go fishing, catch bugs, and run errands for people. It’s a lovely and relaxing game with the added benefit of being attached to a popular Nintendo IP. 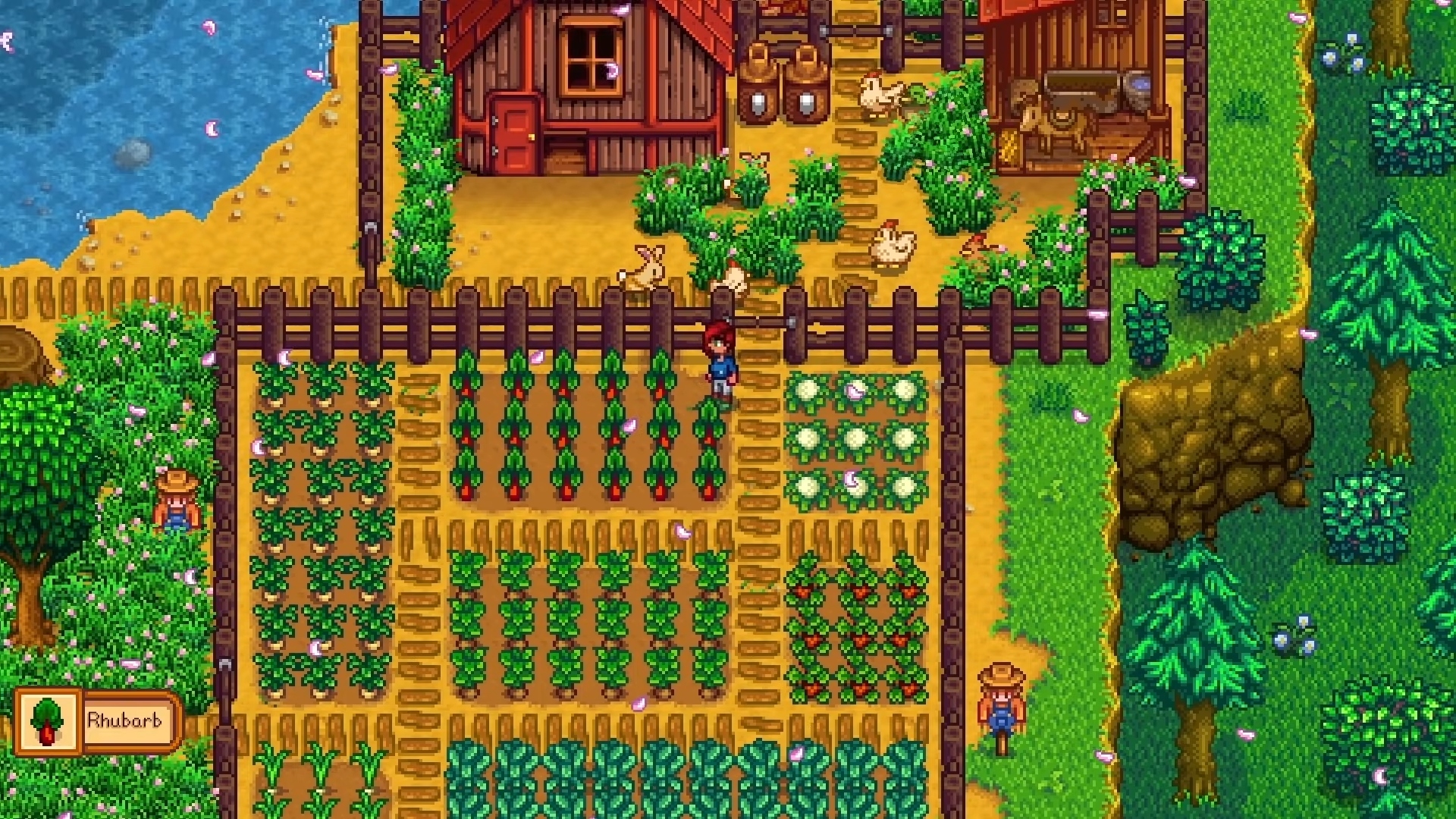 You play as a character who inherits a plot of land in a place called Pelican Town, and then it’s up to you how you proceed. You can polish up your farm and grow all the best crops, or you can go into mines and fight monsters to gather ore, go fishing, or even start a relationship and get married. It’s open-ended and full of possibilities, which is probably part of the reason its managed to be so successful. 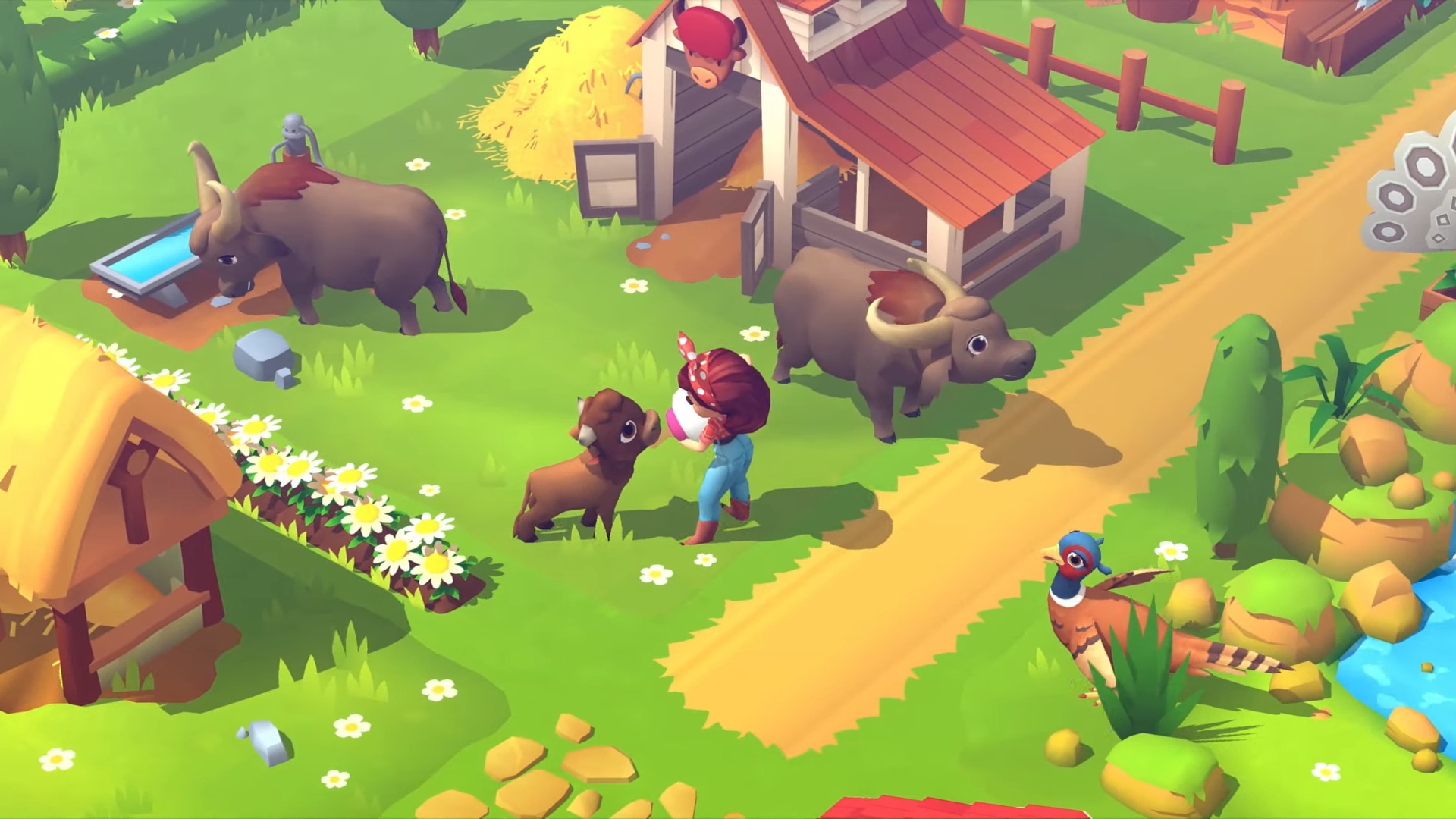 If you were on Facebook circa 2010, you’ll have probably encountered FarmVille before. Back when people played games through Facebook, FarmVille was at its peak, and anytime you’d scroll through your newsfeed, you’d see loads of people posting updates about what they’d been doing on their farm. Today, while the game isn’t played on Facebook, it lives on as a mobile game.

So what’s changed since then and now? Well, the current incarnation of FarmVille basically just expands on everything the original did. As you build your own farm, choosing where to place buildings, plots, animal pens, and more, you’ll find that there’s a lot more to build now, and a significant increase in the number of animals you can have on your farm – you can even breed them to unlock new varieties. 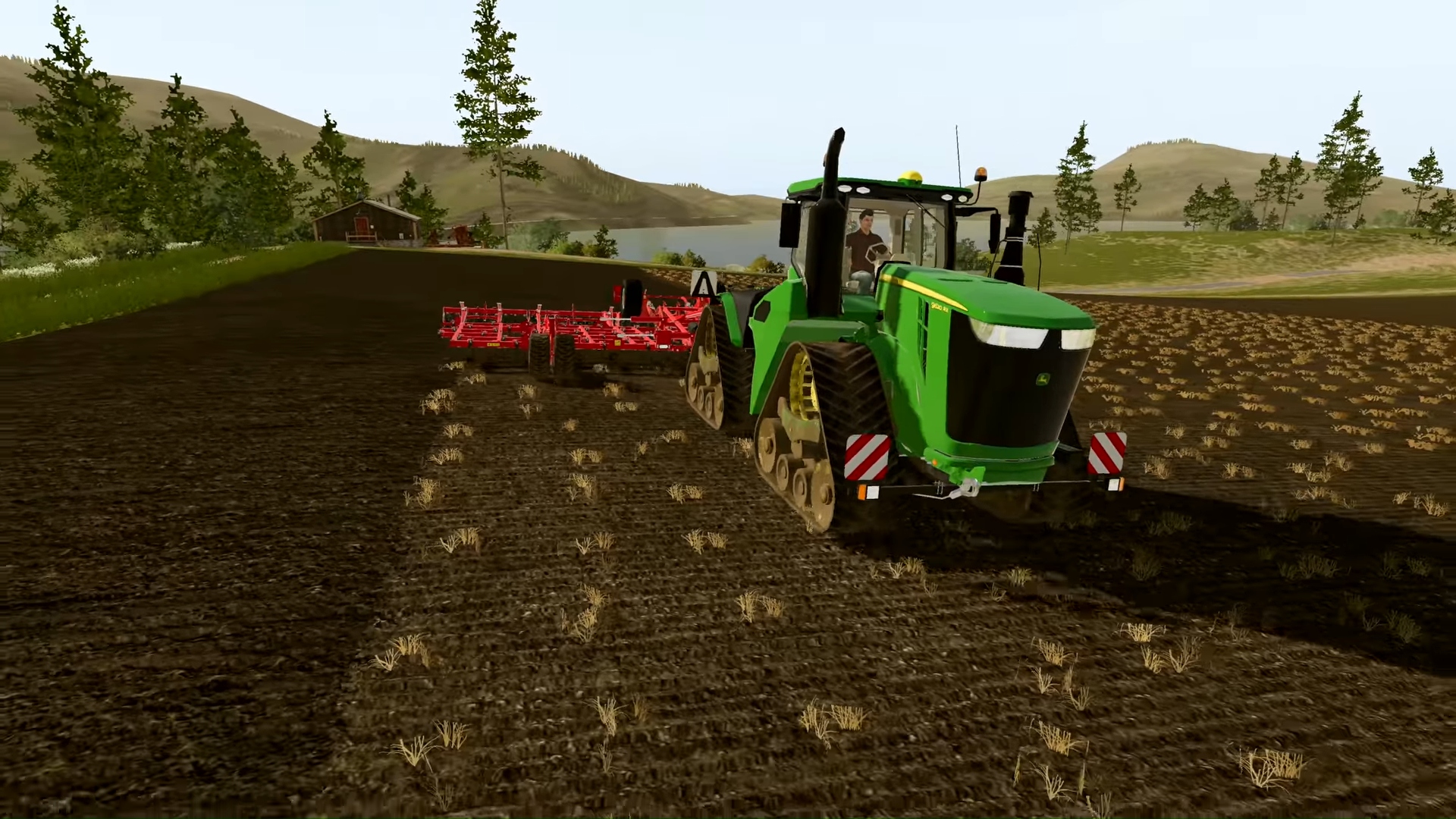 Looking for a more realistic approach to farming? Farm Simulator 20 sees you driving around in tractors and combine harvesters as you grow, harvest, and sell the crops on your own farm. It can be quite challenging to those unfamiliar with the genre, because even simple crops need you to prepare the earth, plant your seeds, fertilise them, and then harvest them – it’s a lot of work, but it can be very satisfying.

With so many different vehicles and crops available, it can be quite daunting to newcomers. However, in that case, you can choose to hire help and have the process automated. This means that you can enjoy it as more of an idle game, where very little input is required from you.

Are you planning on grabbing your pitchfork and getting started with any of these games? We certainly hope that you’ll enjoy them. While you’re at it, why not take a look at our guides on the best animal games, and the best games like Minecraft, for a few more recommendations that might be up your street.