A first-half goal by Borussia Dortmund captain Marco Reus was enough to carry last season’s runners-up past Bayer Leverkusen in their Bundesliga opener on Saturday but their winning start was overshadowed by an injury to new signing Karim Adeyemi.

It was also a victorious return for Dortmund coach Edin Terzic, back on the bench after 15 months following his first stint as an interim coach in 2021.

“We did not start really well, lost possession a few times but recovered well. They were better after the break but we defend our lead well,” said Terzic, who coached for the first time in the Bundesliga in front of fans.

“Sometimes it’s not possible to score more than one and you have to protect that clean sheet instead.”

Adeyemi’s injury that eventually forced him off in the 23rd minute was the latest to a new signing, as Dortmund are already without defender Niklas Suele, nursing a thigh injury, and forward Sebastien Haller, out for months following the discovery of a malignant testicular tumour.

Adeyemi thought he had scored when he turned a Youssoufa Moukoko cutback toward goal in the 10th minute but the ball was kept on the line by Leverkusen goalkeeper Lukas Hradecky before Reus stabbed it over for the lead.

Minutes later, Germany forward Adeyemi was taken off following a knock on his foot earlier in the game.

“He tried to play on but it was not possible,” Terzic said. “We have to wait until tomorrow to have a clear diagnosis.”

Leverkusen, third last season, had their share of chances and were it not for Mo Dahoud’s perfectly timed sliding tackle in the 42nd minute, Patrik Schick would have had the chance to level.

Dortmund came close after the break with Hradecky denying Thorgan Hazard in the 50th before Schick responded with a pair of chances of his own and two good saves from Dortmund’s Gregor Kobel.

It was a much-improved performance by Leverkusen following last week’s shock German Cup first-round exit to third division’s Elversberg but it was spoilt when Hradecky was sent off for holding the ball with his hands outside the box late in the game.

After the end of the game, fans were told to remain in their seats due to a suspect car with a running motor found outside the stadium. Police investigated the vehicle and gave the all-clear 20 minutes later. 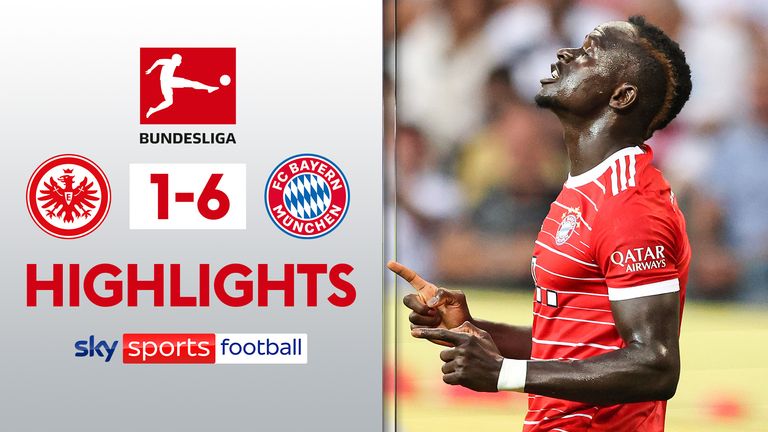 Highlights of the Bundesliga match between Eintracht Frankfurt and Bayern Munich

Pefok, who also scored on his debut in the German Cup on Monday, opened the scoring in the 31st minute to set Union on their way to a third consecutive league win over their rivals.

Ten-time defending champions Bayern Munich started the season with a 6-1 rout of Eintracht Frankfurt on Friday.

Lionel Messi scored twice – including an acrobatic overhead kick – as Paris Saint-Germain opened their Ligue 1 campaign with a commanding 5-0 win at Clermont.

Neymar put PSG ahead after just nine minutes before then setting up Achraf Hakimi to slot home a second.

Marquinhos nodded in a Neymar free-kick to make it 3-0 before half-time.

With 10 minutes left, Neymar crafted PSG’s fourth goal when he played in Messi.

Messi capped a fine team performance when he ran on to a pass from Leandro Paredes into the Clermont area, collected the ball on his chest and flicked it up to score with a perfectly-executed bicycle kick.

Earlier, Monaco were 2-1 winners at Strasbourg with goals either side of the break from Krepin Diatta, firing in a long-range volley, and Sofiane Diop.

Strasbourg saw what would have been a stoppage-time equaliser ruled out by VAR for an offside in the build-up.