Rangers striker Alfredo Morelos has been ruled out of Sunday’s Old Firm match against Celtic after injuring his thigh on international duty.

Manager Giovanni van Bronckhorst confirmed the 25-year-old will miss the game at Ibrox after travelling to see a specialist in London.

He suffered the injury while on international duty with Colombia and was unable to take part in his country’s 3-0 World Cup qualifying win against Bolivia. 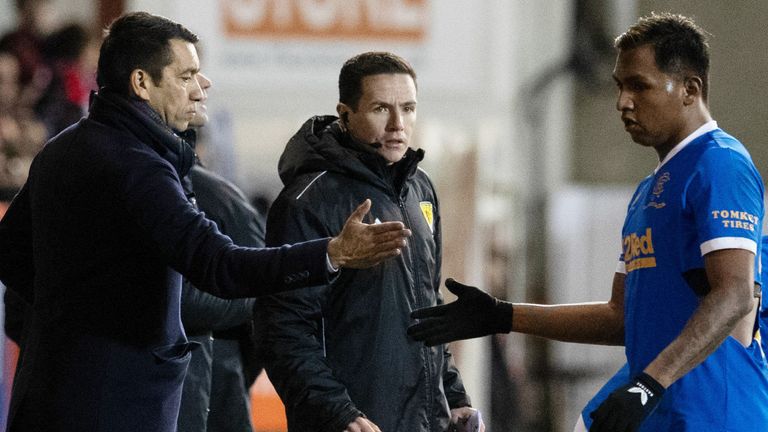 Rangers boss Giovanni van Bronckhorst confirms Alfredo Morelos is out of Sunday’s Old Firm and looks ahead to the visit of Celtic.

“Alfredo unfortunately had a new injury while on duty with Colombia so he won’t be available for this Sunday,” the manager told Sky Sports News.

“I think we will lose him for a longer time. We will assess him in the next few days but he’s out for Sunday.

“We won’t have him back in the next couple of weeks.

Morelos, who has scored 12 goals in 26 league appearances this season, is now in a race to be fit for the club’s Europa League quarter-final against Braga, and is also a doubt for the Scottish Cup semi-final against Celtic on April 17.

“It’s always a blow when you lose players,” the Dutchman said.

“Of course, Morelos is an important player for us, but we have a big challenge ahead of us in the coming weeks so we have to make sure the ones who are ready to play are well prepared.”

Van Bronckhorst is now likely to turn to Kemar Roofe or Fashion Sakala to lead the attack in the top of the table clash against Celtic.

Rangers trail Ange Postecoglou’s side by three points with just seven games remaining and ost 3-0 at Celtic Park in February.

“We don’t have to prove anything,” the manager said.

“It’s a couple of months since we lost the game and we picked ourselves up afterwards and we’re still in contention for three prizes at the end of the season.

“My team is excited, prepared and ready for the game. We don’t need to look forward or back, we just need to make sure on Sunday we’re the winners.”